One male prisoner, Joseph Gerrald was transported on the Sovereign.

Joseph Gerrald was one of the men who became known as the Scottish Martyrs.

The others, Thomas Muir, Thomas Palmer, William Skirving and Maurice Margarot sailed on the Surprize departing England on the 2nd May 1794. 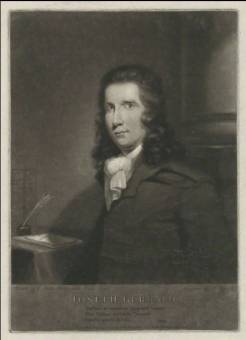 The remarkable trial of Joseph Gerrald, Esq. at Edinburgh, for Sedition....

On the 10th of March, 1794, came on the trial of Joseph Gerald, Esq. late of Bloomsbury-square, London. The accusation, in the instance of the Lord Advocate of Scotland, charged him with being a member of a seditious association, called 'The British Convention,' which met at Edinburgh, in November and December the preceding year; and that, on .the 21st and 28th of November he made addresses of a seditious nature to the members of the said convention. The indictment also charged Mr. Gerald with being present in the convention when the magistrates and sheriff went to disperse the members. The libel was restricted to an arbitrary punishment......continue in - The new and complete Newgate calendar; or, Villany displayed in all its branches By William Jackson

Governor Hunter in correspondence to the Duke of Portland in April 1796 told of the fate of Gerrald....

When the Sovereign store ship arrived here, I found Mr. Joseph Gerrald had been sent out in that ship. He was landed here in a very declining state of health which rendered it necessary that he should reside in some quiet and retired situation. for this purpose application was made to me for permission for his purchasing a small house and garden (then to be sold) in the neighbourhood of Sydney, but so retired as suited the weakly state he was in. Permission was immediately granted for his residing in any place that might be convenient to his health. Here he saw his friends, and was visited by the surgeon, but he was soon pronounced to be in a rapid consumption, of which he died on the 16th day of March last. (HR NSW Vol 3, p. 47.)