The Pitt was the next convict ship to arrive in New South Wales with female prisoners after the arrival of the Albemarle in September 1791.

Charles Bateson in The Convict Ships records the Pitt sailing from Yarmouth Roads on 17 July 1791.

Lieutenant-Governor Francis Grose and the company of the NSW Corps came on the Pitt.

She had lost since she left England, 7 seamen, 18 soldiers, 4 soldiers' wives, 5 soldiers' children, 16 convicts and 2 convicts' children. The rest had recovered. At Rio fresh stock and other supplies were loaded and the ship was preparing to sail from Rio on 25th October 1791. [3]

In the following correspondence to Nepean, Major Grose told of the illness suffered on the voyage -

Major Grose to Under Secretary Nepean
Rio de Janeiro,
October 22nd 1791
Sir, I have the honor to enclose you a return* of the detachment of the N.S.W. Corps, which you will perceive how much we have suffered from a fever that has raged with great violence amongst the soldiers and seamen of this ship. You may probably recollect that for the purpose of giving air to the convicts in the orlop deck a grating was made on both sides the ship. Over these gratings the soldiers and convicts slept, and although it was a matter of great comfort to the convicts the fresh air being so conveyed to them, the stench that arose from them was so dreadfully offensive as to bring on the fever with which we have so much suffered. The officers of this ship are all in good health, Mr. Theed, one of the mates alone excepted; and it is very remarkable that amongst the convicts who are confined there is not a sick man, and of those who were released for the purpose of working the ship when the sailors could do their duty no longer, not any have been so severely afflicted as to lose their lives. Eleven of the sailors are already dead, and the crew at this time mostly in the sick list. The convicts behave themselves with great regularity, and but for the melancholy scenes this fever has occasioned I never before had so pleasant, although so tedious a voyage. 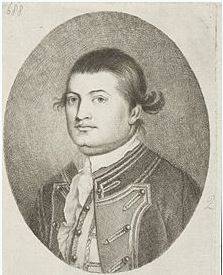 
The necessity of giving port wine to the convalescents is so strongly recommended that I have endeavoured to procure it at this place, and for the payment of which, should I succeed, I shall be forced to draw on the Treasury. I have nothing particular to communicate at this time. The sick soldiers are recovering fast, and my surgeon's mate gives me great hopes that I need not expect any more of them to die of this disorder. I am, etc., Francis Grose

*Post, p.526. The return shows that 13 private soldiers, 5 women , wives of soldiers, and 1 child had died up to 20th October. The number of deaths amongst the seamen is not stated according to Captain Manning, who was in command of the Pitt, 27 persons died in 14 days, including seven seamen. Post p. 527. The total deaths on the voyage, exclusive of children, amounted to 49; and 120 of the convicts were sick when landed. See Phillip's despatch to Dundas 19 March 1792. [4]

It is with great concern that I have to acquaint you of being obliged to put into this place for another fresh supply not doubting, if you have received the account which I had the pleasure to write you from Port Praya, but that you have despatched us, before this time, from the Cape of Good Hope. From St. Jago hither, however I have experienced nothing but adversity - attributing the groundwork of our misfortunes to the lateness of the season when we left England. At St. Jago the season was bad and the heat of the sun almost intolerable.

We left it about the 20th August, and were nearly a month in a very distressed situation - almost calm the whole time, with incessant rain - sometimes a few miles to the southward of the sun, and sometimes a few miles to the northward, most frequently without the smallest breath of air, but frequently very heavy squalls with the severest thunder and lightning I ever was witness to in the whole course of my life. A continuation of such weather, with so many confined in so small a space, brought forth a most malignant epidemical fever, which spread so rapidly among the sailors and soldiers, and in a degree so alarming, that for some time we were almost afraid to approach each other. There were very few on board who escaped its fury. Mr. Theed was among the first likely to fall a victim, but is providentially recovered. For a considerable time our scene was truly melancholy. In fourteen days we buried twenty seven seamen, soldiers, their wives and children. Scarcely a person escaped death who was watering on shore at that d.... place, St. Jago. But extraordinary as it is to tell, it is not more extraordinary than true, that the fever never touched the convicts, among whom, one might naturally have concluded, that it would have been most fatal; we have not buried one since we left Praya! But though they appear to have been proof against the fever, yet they have in other instances not been exempt from affliction. The flux and scurvy attacked them without mercy. Never were seen, I believe, such ulcers and ulcerated legs in the world. The smallest appearance on the flesh in a day or two spread broader than your hand, and soon made its way to the very bone, and many of the soldiers experienced equal calamity.

These misfortunes were succeeded by adverse winds, which drove us so far to the westward that we were not able to cross the line under 32 degrees of longitude west; and when that was accomplished we met with such continued hard gales from the south, and with a very heavy sea, that we fell in with the coast about the latitude of 8 south, and then were compelled to bear as far as this place before we could expect any change of wind. From these hardships combined, I can assure you that we had serious faces, and, though driven very near the land, my people were so weak and so much relaxed that we were almost afraid to venture in with it, or make even the attempt for harbour with any degree of safety. All the sailors we could muster were only five in a watch, and many of them not able to go aloft. From such unexpected delay and misfortune I was desirous of getting in anywhere, and the crew being so much exhausted, I was compelled to liberate many of the convicts and trust to their assistance to relieve the ship. Our joint efforts were then effectual, and you can form no conception of the joy that appeared in each person's countenance when we entered the harbour (Rio). It is the finest in the world - everything plentiful, and everything cheap. The Viceroy, and all the officers in the place, have paid us every possible attention. Immediate orders were given for us to receive as much beef as we could desire, with all the fruits with which the country abounded.

They gave directions also that the sick should be received at their hospital, and many were sent immediately on shore. The sick convicts also were sent under proper care to an island which was very near the ship, whither I sent them daily provisions, and Mr. Jameson attended them with his usual care and punctuality. We have been here now nearly three weeks, and are ready for sea. My people are returned a different class of men from the state in which they were landed, and I think I may add with safety that we are nearly recovered.

I am sorry to tell you that we have lost four of the convicts, I was under the necessity of permitting them to go on shore with the boats, from whence they did, or at least attempted to make their escape. I rather think they were drowned in making the attempt, or if not, they must have been secreted in a convent of the Friars. I applied to the Viceroy, and every step was taken that was possible for their recovery without effect....[4]

The Pitt arrived in Port Jackson on 14 February 1792. One hundred and twenty male convicts were ill when landed.;

1). Within eight months four men who had arrived on the Pitt had absconded with others from the settlement. They plundered the grounds of settlers and others and were so daring as to make an attack on the stock in the farm yard and had cut the throat of a fine goat. They were declared outlaws and a reward was offered for their apprehension. They were retaken towards the end of October and were sentenced to 300 lashes and to be worked in irons for the remaining part of the transportation. They were however forgiven after receiving 100 lashes. (HR NSW., Vol. 1 part 2, p 659)

2). Convicts John Warby and William Singleton (father of Benjamin Singleton) and VDL settler William Abel all arrived as convicts on the Pitt.

3). Charles Bishop arrived as a convict on the Pitt. He died in 1793 and was buried in the Old Sydney burial ground as was William McCannon who died in December 1792

4). Thomas Watling originally sailed in the Pitt however escaped at Cape Town. He was captured by the Dutch, imprisoned and taken on board the Royal Admiral in 1792. During his first months in the colony Watling continued a series of letters which he had begun at Cape Town; as Letters from an Exile at Botany Bay to his Aunt in Dumfries - they were published in Penrith, Scotland, probably in 1794.

5). The frame of a small vessel arrived in the Pitt. By 1793 she was launched as the schooner Francis and was of 41 tons. In June 1801 she accompanied the famous expedition to the Coal River (Hunter River) and returned to Sydney with a cargo of coal which was exchanged for nails and iron and shipped out on the Earl Cornwallis. This is believed to be the first shipment of coal exported from Newcastle.

6). Prisoners and passengers of the Pitt identified in the Hunter Valley region


Prisoners of the Pitt identified in the Hunter Valley -