The convict ship Pitt arrived in 1792 with a military guard of the New South Wales Corps commanded by Lieut-Governor Francis Grose. The family of Francis Grose accompanied him. [5] On board the Pitt was the frame of a small vessel. When completed in 1793 this vessel was launched as the schooner Francis and weighed 41 tons. This was the first ocean-going vessel constructed in the colony.

Below is an enlargement of a section of A partial view of Sydney Cove taken from the Sea side before the Surgeon General's House.

It shows a small vessel raised on stocks perhaps in construction. There is no indication of the names of the ships in harbour or the small vessel on shore, however this artwork dated 1790 - 1795, shows Sydney Cove as it would have been around the time the Francis was being built.


The artwork can be viewed in full at the Natural History Museum and is described there as follows:
Artist: Port Jackson Painter
Reference: Watling Drawing - no. 14
A monochrome view across Sydney Cove from the outside Surgeon-General John White's house on the western shore, with one ship at anchor and another at left in full sail heading eastwards towards the harbour entrance. Both are flying the naval ensign of Queen Anne. In the centre foreground two Aboriginal men stand with fishing spears on a rocky outcrop. One is depicted in left profile pointing a throwing stick to the left, while the other is shown in frontal view looking towards the viewer. To the right a woman gestures towards them with a paddle from her canoe, which has a fire burning in the middle. On the far shore of the cove a small boat with figures can be seen approaching Government Wharf. A boat raised on stocks can be seen on the shore nearby, something which is also depicted in Watling Drawing numbers LS6 and 20. Government House and gardens is depicted on the hillside behind, and a hut can be seen at the end of the tree covered promontory of Bennelong Point.

According to Robert McNab in Murihiku: A History of the South Island of New Zealand and the Islands, the Francis was launched on the birthday of the son of Lieutenant-Governor Grose. The foremast of the vessel was a red pine spar brought from Dusky Bay by Captain William Raven by whom also she was launched and fitted out [2]. According to some sources Francis Devis Grose, son of Lieut-Gov Grose was born on 25 July 1790, making the date of the launch of the Francis 25 July 1793.

Lieut-Governor Grose informed Under Secretary Nepean of the appointment of William House as master of the Francis in correspondence dated 31 May 1793.....

I have found it necessary to retain in the colony Mr. William House, late boatswain of the Chatham, armed tender, who was sent here by Captain Vancouver for the purpose of returning to England as an invalid. He will be employed here in navigating the sloop which was sent out in the Pitt, and I have placed him on the list of superintendents with a promise of his being paid the like sum as is paid by Government to those persons. -

The vessel sent in frame by the Pitt has at length been put into the water. I have placed in her as the master the late boatswain of the Discovery. He had been sent here by Capt. Vancouver, for the purpose of returning to England as an invalid, but having recovered from his complaint, and being willing to take the command of the sloop for forty pounds a year, I thought it expedient to employ him, having manned the vessel with some seamen left here by other ships. She will sail for Dusky Bay in New Zealand immediately, in order to ascertain how far that place, which, I understand, possesses all the advantages of Norfolk Island, with the addition of a safe harbour and seal fishery, may tend to the benefit of his Majesty's service, as connected with these settlements.[1]

William House had been with Captain Vancouver in Dusky Bay in 1791 [2]. He arrived in the colony on the Daedalus on 20 April 1793.

In The Voyage of Vancouver, William House was described as a careful, sober, and attentive officer, having laboured under a violent rheumatic complaint, since the departure of the Discovery from New Zealand [3].

Voyages of the Francis

1). In 1795 Charles Grimes sailed on her on his Expedition to Port Stephens

2). In 1798 Lieutenant Matthew Flinders joined the schooner Francis on a visit to the Furneaux Islands where he carried out useful hydrographic work. (Australian Dictionary of Biography)

3). In June 1801 the Francis accompanied the rather famous Expedition to the Coal River (Hunter River) and returned to Sydney with a cargo of coal which was exchanged for nails and iron and shipped out on the Earl Cornwallis. This is believed to be the first shipment of coal exported from Newcastle. 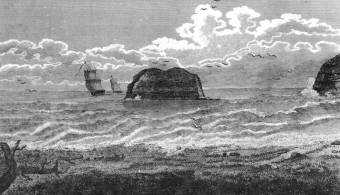 ....Image of the Lady Nelson and Francis entering Coal River in 1801 from Lieutenant James Grant's account of his visit to Hunter's River and Ash Island from 'The narrative of a voyage of discovery performed in his majesty's vessel the Lady Nelson of sixty tons burthen, with sliding keels; in the years 1800, 1801, and 1802, to New South Wales'


4). In March 1805, having just a short time before disembarked the new Commandant Charles Throsby at Newcastle, the Francis was wrecked on the shore opposite Coal Island (Nobbys). Select here to read about the wreck of the Francis and Charles Throsby's further trials when he arrived at the penal settlement at Newcastle.

[2] McNab, Robert, Murihiku: A History of the South Island of New Zealand and the Islands, p. 94