The Military guard consisted of 29 rank and file of different corps under the command of Captain Storey of 20th regiment as well as five women and five children. They embarked at Deptford on Saturday 18th July 1829.

Convicts of the Morley were tried in towns and counties in England and Scotland - Kent, Middlesex, York, Hertford, Lincoln, Lancaster, Salop, Warwick, Derby, Chester, Surrey, Nottingham, Worcester, Bucks, Leicester, Aberdeen, Glasgow and Edinburgh. They had been held in prison hulks - some for many months. 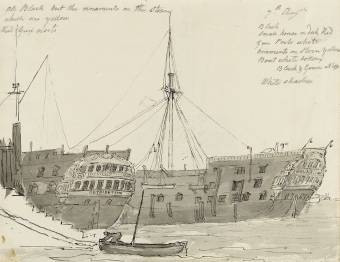 Charles Fletcher and James Ward were tried at Nottingham on 16 April 1828 and admitted to the Retribution hulk with many others on 13 May 1828. They were transferred to the Morley on 27 July 1829 and so had already spent fourteen months on the hulk before they set sail. [6]


Three days later on 30 July 1829 one hundred prisoners held on the Dolphin Hulk were transferred to the Morley. [5]

Felton Matthew embarked on the 3rd August at Sheerness. He recorded the event in his diary.....

The weather throughout the day stormy and tempestuous - with heavy rain at intervals - wind W.S.W. - my first day on board ship has certainly been a most unpropitious one. The variety of noises by which I was kept awake at night and disturbed early in the morning - the disagreeable smells the clanking chains of the convicts - with other sights and sounds far from agreeable tend to impress me with an idea of the inconveniences to which they who travel by sea must be subject. [1]

On 9th August they weighed anchor at 3.30p.m. with a strong wind from W.S.W. and had a fine view of Margate and Ramsgate and anchored off Deal [1]

In his diary Felton Matthew reveals his last views of England, a sight most of the convicts on board would never see again......

[11 AUG 1829] Tuesday 11th Augt At ¼ past 5 A.M. weighed with a little light wind from N.W. after doubling the S Foreland it fell calm and continued so throughout the day - at 9 we were opposite Dover and continued in nearly the same position for several hours. Light air from S.E. but we made very little progress and at night were nearing Dungeness. Weather clear and beautiful The scenery along the coast is delightful - we sailed within about 2 miles of Dover and had a fine view of the town which appears neat and pretty. The Castle is a fine building and its situation most commanding. The French coast clearly visible - upwards of 30 sail vessels on our stern rounding the Foreland presented a very pretty appearance

[12 AUG 1829] Wednesday 12 Augt At 6 A.M. had made but little progress. light wind from S.E. - almost a calm - Weather clear and fine - at 2 P.M. Beachy Head W.N.W. of us - at 4 P.M. a fine breeze from W.S.W. sprang up which carried us rapidly on our course - passed successively Rye Winchelsea and Hastings - at the latter place I could distinctly observe the lovers Seat, The Conqueror's Table and other well known spots

[15 AUG 1829] Saturday 15th Wind strong from N.E. towards noon moderated a little - in the evening exchanged colours with a Swedish man of war - Weather fine but cold

[16 AUG 1829] Sunday 16th Weather fine and warm - wind S.E. Latitude at noon 47° 22' N nothing can possibly be more monotonous than the scene around us not a solitary bird nor a fish nor any living thing to be seen. I think it must require a well regulated mind to sustain its equanimity during a long voyage by sea. Thrown entirely upon its own resources it must require considerable exertion to resist the encroachments of ennui. I am glad to perceive that some little deference is paid to this day. The morning service is read to the prisoners by the Doctor and to the guard by their officers and all the seamen make a point of appearing in their best and cleanest clothing [1]

This was Richard Lewis' first voyage as surgeon superintendent on a convict ship. He kept a Medical Journal from 8 August to 14 December 1829........

There were no deaths on the voyage. There were several cases of sea sickness early in the voyage and some long-lasting cases gave rise to fevers. At the end of the voyage diseases of debility became more prevalent and there were several cases of scurvy, only cured by arrival in port and a healthier diet. He described two cases of vesicular eruption, affecting the lower extremities which answered to the description given by Dr. Bateman of Rupia which is said to arise most commonly in the ill ventilated dwellings of the indigent in prisons and poor houses.

There were two births, both natural and of short duration. One was to Mary Donovan, wife of Serjeant Donovan on 13 October and the other to Bridget Hands, wife of Private Hands on 3rd November.

Two patients sustained fractures, the second being so close to the head of the bond of the arm that splints could not be used and a wedge shaped pad was improvised and placed in the axilla. [3]

The Morley arrived at Port Jackson on 3rd December 1829.

A muster was held on board by the Colonial Secretary Alexander McLeay on 5th December 1829. The convict indents include the name, age, education, religion, marital status, family, native place, trade, offence, date and place of trial, sentence, prior conviction, physical description and where assigned to on arrival.

The Sydney Gazette reported that the prisoners were landed on Monday 14th December and marched to Hyde Park Barracks. A number of them had the appearance of respectability. [2]

The Morley was to sail for China in January 1830.


Convicts of the Morley identified in the Hunter Valley

1. Bushranger Richard Anscomb arrived on the Morley. He was executed in 1831

2. An old man named James Gloucester (Gloster), was fully committed for stealing a tongue, the property of his employer Mr. Jobbins - Sydney Gazette 31 May 1832.

4. National Archives: Reference: ADM 101/55/7 Description: Medical and surgical journal of the convict ship Morley for 8 August to 14 December 1829 by Richard Lewis, Surgeon, during which time the said ship was employed on a passage to Port Jackson, New South Wales, having on board 200 male convicts.

[1] Diary of Felton Matthew - The Diary of Felton Mathew: A government surveyor in colonial New South Wales Originals held in the manuscript collection of the National Library of Australia, Canberra. Transcribed, edited and published by Bruce Jones.

[5] A list of one hundred convicts embarked on board the Morley for New South Wales from the Dolphin hulk at Chatham. [manuscript] : this 29th day of July 1829 pursuant to the Right Honourable Robert Peels' Order of the 15th day of July 1829 National Library of Australia Catalogue