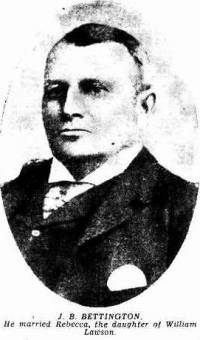 J. B. Bettington arrived in Sydney on the Ionia on December 19, 1827. He began a business as a shipping agent and in the following year he was elected a director of the Bank of New South Wales.

In pastoral pursuits James Brindly Bettington was in partnership with his brother John Henshall Bettington who had been previously in the colony but resided in London until January 1836 when he arrived in New South Wales on the Lord William Bentick .[2]

J. B. Bettington married Rebecca, the daughter of explorer William Lawson in June 1830. Some years later he took up land near Bathurst with his father-in-law William Lawson.

This land was later relinquished and he leased and afterwards purchased land near Merriwa which he named Brindley Park. He formed a sheep stud from which many other studs and flocks in Northern New South Wales and Queensland originated.

J. B. Bettington purchased in 1840 a property called Oatlands, near Parramatta, from Lieut. Percy Simpson, who was well known as the founder of the convict settlement at Wellington and formerly owned of a grant of land near Eraring. The Bettingtons lived at Oatlands for many years.


One hundred years after J.B. Bettington's arrival in Australia an article was published in the Muswellbrook Chronicle reflecting on the contribution of the Bettington family to the sheep industry.....

For many years large estates have been the subject of much comment by politicians and others, who, while condemning their existence always fail to remember that the inclinations of the possessors of big holdings were the chief factors in numerous cases in the great work of nation building. The possessors of such character traits were men whose adventurous spirits prompted them to dare much in the search for golden treasure and the work of subdividing the wilderness in a new land for the raising of flocks and herds......The founding of the Brindley Park Estate at Merriwa is an admirable illustration of the forethought, enterprise, and general capability of a valiant pioneer. [1]

As well as the Brindley Park estate at Gummun Plains (Merriwa), in the 1830's the Bettington brothers William, John Henshall, Joseph Horton and James Brindley acquired pastoral estates in the Hunter Valley Piercefield and Martindale shown on the map above, that had formerly been in possession of William Carter.

While on a visit to England J. B. Bettington died at Plymouth in 1857. His son, also James Brindley Bettington, became manager at Brindley Park. [3]

1) Pedigree of Brindley and Williamson.