William and Ann Bradridge arrived in Hobart on the Aguilar on 4th February 1824. [1]

The Aguilar had departed England on 3rd September 1823 and touched at the Cape of Good Hope, leaving there on 24th December. Passengers included J.B. Weller, John Robbins, Charles Robbins and members of the Sparke family. Select here for the full passenger list.

William Bradridge was an architect. His application for a grant of land dated 17 August 1824 is included in the Colonial Secretary's Correspondence -

17th August 1824
Praying Grant of Land
As I did not bring with me the accustomed letter from England being misinformed that such letter was not required, I trust that your Excellency will allow me the usual grant in proportion for the means I possess - The statement of which I beg leave to present you and believe me to be Your Obedient Humble Servant, William Bradridge No. 6. King Street Sydney.....

He was promised 500 acres by Governor Brisbane on 26 August 1824.[2] The location can be seen on the map above at the middle far left below the grant of Henry Rae. In June 1825 William Bradridge was receiving victualling for himself, wife and convict servants from the stores at Newcastle.

It is not known how long William Bradridge resided on his grant, however in the 1828 Census William and Ann Bradridge with their children William junior age three and Mary aged four months resided in Castlereagh Street, Sydney where he was employed as Superintendent of Carpenters, a position he still held in 1832. Margaret Connolly per Hooghley, a servant from Waterford absconded from his service in December 1831. 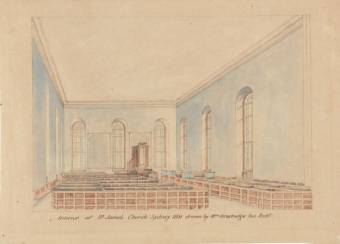 In November 1836 he was congratulated for his masterly style in making improvements to Mr. Polack's auctions rooms which were the largest in the colony. It was said to have been the first undertaking of the sort in the colony.

William Bradridge's wife Ann died in Druitt Street Sydney in 1837 and his eldest son died in 1841.

William Bradridge passed away age 65 on 18 February 1868 having suffered disease of the heart, a colonist of forty three years standing [3]

His Hunter River estate was later acquired by John Sparke who also arrived on the Aguilar.