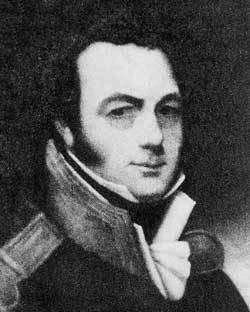 
Thomas Braidwood Wilson was baptised on 29 April 1792 at Kirknewton, West Lothian, Scotland, son of James and Catharine Wilson. [5] He was named by his parents in honor of Dr. Thomas Braidwood who was born in 1715 and who became known as the first to open a foundling school in Edinburgh in 1760 as well as the first school for the deaf and dumb in Britain.


He was appointed Surgeon in the Royal Navy in 1815

He married Jane Thompson in Durham, England in 1826

Prince Regent to NSW in1824

After his first voyage on the Richmond in 1822 he was granted land which he selected on the Macquarie River, Van Diemen's Land, and named Janefield. He was reponsible for the successful introduction of the working bee for the honey industry in Tasmania having brought a hive with him on one of his voyages.[1]

Account of the shipwreck of the Governor Ready in 1829

Dr. Wilson has been eight voyages to New South Wales, in charge of convicts, and has been twice or thrice shipwrecked in that time. In the year 1829, after landing his convicts at Sydney, he re-embarked for Batavia, in the ship called the Governor Ready; and, on the 17th of May, the ship struck with such force on a coral reef, near Murray's Island, that the rock penetrated her bottom, and, in a few minutes the water was up to the lower deck!

They had now 900 miles, at least, to traverse in open boats, and through a most perilous navigation. It was almost exactly in the same course as that pursued by the launch of 'Bounty Bligh.' But Dr. Wilson's crew were exposed to more perils than the officers of the Bounty, who had a strong boat to bear them over the pathless deep.

We cannot dwell on the various 'hair-breadth escapes' of the boats, in this long voyage through innumerable rocks and shoals. One scene will be sufficient. One evening a hurricane came on, and the crew of the jolly-boat, being frightened, implored to be taken into the long-boat, already labouring with her cargo, and very leaky. At first they resisted this appeal, but at length complied, at the imminent risk of all their lives. The crew of the jolly-boat no sooner came close to the long-boat, than they made a rush on board the latter, and nearly upset her. They were now in great danger, and could hardly keep the boat before the wind; “when, about nine o'clock, a heavy sea, whose death-denoting sound still lingers in my ears, rolled over the quarter, and filled the boats”. For a moment they were paralyzed, believing that they were going to the bottom; but, finding the boat still floated, they managed to bale out the water. They had scarcely cleared her, when again they were swamped - and again preserved from a watery grave.

After a series of miraculous escapes they reached Timor. Here they met with some acquaintances, and one of these was so struck with the wan and altered visage of Dr. Wilson, that he burst into tears while surveying the living remains of his friend. Now, during the whole of this long series of disasters, starvation, and exposure, night and day, to storms and rains in open boats, they lost not a man - nor had they a single instance of sickness. Some of them, indeed, died afterwards, when the toils and dangers were over, and when they had food and shelter from the elements. [2]

From Timor Dr. Wilson sailed to the Swan River.

With Captain Collet Barker who was Commandant at King George Sound, he explored the region inland from King George Sound. Wilson named the hill overlooking the future township of Mount Barker in the Commandant's honour. During these expeditions Wilson collected seeds and species to bring back to his friend, Allan Cunningham at the Sydney Botanical Gardens. A species of grevillea from Western Australia, Grevillea wilsoni, was named after him. Wilson's inlet in Western Australia is also named after him.[5]

He was granted 5000 acres (2024 ha) for his explorations in Western Australia.

In 1826 he transferred his Tasmania grant to New South Wales

Part of the land chosen by him in New South Wales he called Braidwood. Survey and allocation of land in the Braidwood area took place in the late 1820s and in 1833 the western end of Dr. Wilson's land was resumed as the Jellamatong Village Reverve, later becoming known as Braidwood.[3]

His wife and daughter accompanied him on his 1833 voyage and they settled at Braidwood Farm in NSW in 1836.

He began a windmill on the hill overlooking Braidwood but it was never completed, being struck by lightning in 1835. It was demolished by dynamite in 1901.[4]

Dr Wilson, like many 19th century medical practitioners, was interested in plants. On one voyage he brought a shipment which he carefully tended throughout the journey, only to lose them overboard during a severe storm three days out of Sydney. He planted a range of trees on his property, Braidwood Farm, and brought a skilled gardener from Scotland to care for them. [3]

He built a large house on his estate but this was burnt down in 1838. Another mansion was under construction when Dr. Wilson died suddenly in 1843 age 51 years.

He and his wife and son were buried in a vault in Braidwood cemetery.

1). Narrative of a Voyage Round the World by Thomas Braidwood Wilson published in 1835

[2] The Medico-chirurgical Review and Journal of Practical Medicine, Volume 24