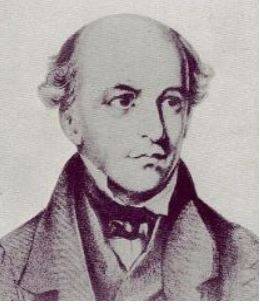 In 1827 Allan Cunningham already had vast experience in the exploration of Australia, both by land and sea.

He was acquainted with botanist Robert Brown and was a Botanical Collector for the Royal Gardens at Kew. He was under the patronage of Sir Joseph Banks when he arrived in Australia on the Surry in 1816. His dedication to botany led him on many journeys - he accompanied John Oxley to the Lachlan River in 1817 and joined Phillip Parker King on many expeditions over the next ten years. He was on King's third expedition which included surgeon James Hunter and he was on King's fourth and final survey expedition in 1821 which included surgeon Andrew Montgomery. He accompanied John Oxley's second expedition to Moreton Bay in September 1824 when the first settlement was established at Redcliffe.

For his dedication and achievements in botany and exploration he earned the respect of Government in this first decade, however his best was yet to come. The crowning achievement of his career, came in 1827 when he offered his services as leader of an expedition proposed by Sir Ralph Darling. The expedition was to explore the inland country west of the Great Dividing Range between the Hunter River and Moreton Bay.

The expedition consisted of six men, 11 horses and several dogs. Cunningham took with him a Schmalcalder's pocket compass, a chronometer, barometer and an odometer as a distance gauge. The horses were all sent overland from Sydney to the Hunter River but Cunningham himself travelled by sea to Newcastle on Sunday 15th April 1827 on the Lord Liverpool probably captained by Alexander Livingstone.

At Newcastle he loaded his supplies on to the Port Stephens boat in readiness for sailing up river. The Port Stephens boat was one of three boats used for carrying settlers and their supplies up the Hunter River at the time and was capable of carrying four tons of goods. Cunningham shared the vessel with others who were travelling north.

The members of the expedition all met up again at Glennie's farm Dulwich and proceeded together to Segenhoe near Scone. The expedition left Segenhoe on 30th April to cross the Liverpool Range at the head of Dartbrook Creek.*

It has been written that the Dartbrook was so called from an incident when one of two government surveyors who explored the area in 1824 had been wounded by a spear or dart during an attack by Aborigines. (This was Henry Dangar's expedition which crossed the Liverpool Ranges but retreated when attacked by the Wanaruah tribe).

There were no attacks from natives on Cunningham's expedition but conditions were arduous. In crossing the ranges the way was so steep that pack saddles were taken from the horses and carried on the men's shoulders. They camped high on the ranges where the Liverpool Plains could be seen away to the horizon. Until this time the expedition had been guided by Peter McIntyre.

After descending the northern slopes of the range on 5th May Cunningham headed north to the Peel River passing through open bush composed for the most part of iron bark and box.

He then crossed the Warrah and Quirindi Creeks and observed marks of natives on the trees and bark huts which had been recently occupied but the first encounter with natives was not until they reached Manilla River.

Being a little in advance of the horses, he wrote, I had no sooner reached its right bank, than my attention was arrested by the appearance of smoke, which was rising from the forest ground on the opposite bank and immediately I perceived four natives and a child, who having previously observed me were standing for the moment in a state of extreme surprise and alarm.

On May 21 the expedition reached a broad river later named the Gwydir by Cunningham; after passing through barren wooded country broken by ridges and gullies they passed close to the present site of Warialda. They changed direction and came to the Macintyre River finding it little more than a channel of sand, the country then being in the grips of a devastating drought. Cunningham was concerned about the scarcity of water for their own needs as well. The horses were weakened by the journey and lack of pasture and half the original rations had been consumed by the end of May. Winter and the possibility of bad weather became overriding considerations as he pondered how much further he should penetrate north. He determined to turn more to the east rather than persevere on a northerly course as originally planned and consequently came upon the 'handsome westward flowing river 30 yards wide and very deep' which he named the Dumaresq (named for
Lieutenant-Colonel Henry Dumaresq). The party crossed this river near the present site of Texas and continued on for the next six days through hard, monotonous country and dense thickets.

On 6th June west of the present site of Warwick, Cunningham obtained a most agreeable view of open country. This was, in fact, Cunningham's first sight of the pasture land which he was to name the Darling Downs - more than 5,000 square miles of fertile black soil plains and valleys west of Moreton Bay. Through these Downs flows the Condamine River which they crossed on this day. Beyond the Condamine, Cunningham found 'downs of a rich black and dry soil, clothed with abundance of grass'. In a valley to the east of the Condamine which he named Logan's Vale in honour of Captain Logan, commandant of the settlement at Moreton Bay, Cunningham rested his men and horses. He climbed the ridge above where he had encamped and from there observed at a distance of two or three miles to the north east a very deeply excavated part of the main range 'So remarkable a hollow in the principal range I determined not to leave unexamined.'

From here he could have made his way across reasonable flat country to the Brisbane River and Moreton Bay. But this was not his intention, and on June 16, he left Logan's Vale to return. By July 9 he had crossed his outward track near the Gwydir and continued south across the Liverpool Plains and over the Liverpool Range by a pass slightly to the west of that which they had used in May. The expedition reached Segenhoe again on 28th July after an absence of 13 weeks. They rested at Segenhoe and left on 5th August to travel by Bathurst to Parramatta where he submitted a report of his expedition to Governor Darling.

In July and August 1828 Allan Cunningham returned to Moreton Bay by sea and explored the country southward to the Logan River and Macpherson Ranges and found another gap, now known as Cunningham's Gap. He was accompanied on part of this expedition by botanist Charles Frazer who arrived on the Guildford in 1816 and Captain Patrick Logan.

Allan Cunningham returned to England and was later offered the position of Colonial Botanist at Sydney. He declined this position in favour of his brother Richard Cunningham who was murdered by Aborigines on the Bogan River in 1835. Allan Cunningham did return to Australia (on the Norfolk in 1837) but his constitution was weakened by the hardships and deprivations of his travels and he died in 1839.

* According to Henry Dangar's map there were two passes used to cross the Liverpool Range, one at the head of Dartbrook (which is the one taken by Allan Cunningham), and the other at the head of Page's River. Dangar noted on his map that the Page's River route was easier, however Allan Cunningham and his guide Peter McIntyre may not have known this as Dangar's map didn't reach the colony until September 1828.

Letters from Australia announce the death of Mr. Allan Cunningham, on the, 27th of June last. "His health," says Captain King, R.N., in a letter to the secretary of the Geographical Society, " received a severe shock in New Zealand, and ever since he has been rapidly declining. Two hours before his death  -  having been inaudible all day -  I told him that the governor had received a letter from Sir Gordon Bremer, giving a favourable report of the new colony at Port Essington, when in a moment his eyes glistened, and in a rapid and audible voice he said, ' Well! did they go inland?' I told him, ' not far.' He then fell off again, and scarcely said any thing more. He died calmly and without a sigh."

"Mr. Cunningham was in the 48th year of his age, having passed twenty-five years in active scientific researches in Brazil, and in New Holland and the neighbouring islands. In 1814, Mr. Cunningham received the appointment of Botanical Collector to the Royal Gardens at Kew, left England in company with Mr. Bowie for Rio, having, through the influence of the late Sir Joseph Banks, obtained permission from the Portuguese government to travel into the interior. The travellers reached as far as St. Paul's, where they remained some time, and made many valuable collections, which were transmitted to the Royal Botanic Gardens at Kew.

After a residence of two years in Brazil, Mr. Cunningham parted from his companion (who went to the Cape of Good Hope), and embarked on board a vessel for Sydney, where he arrived in 1817. He shortly after joined Mr. Oxley, the surveyor-general, on his expedition down the Lachlan river, and on his return, he accompanied Captain Philip Parker King in his four voyages of survey on the north and north-western coasts of New Holland. In these voyages he made some interesting collections.

Mr. Cunningham afterwards visited New Zealand, Van Diemen's Land, and Norfolk Island, and also took several journeys through the Liverpool Plain district and the Moreton Bay country, the whole of which were equally fruitful in a botanical as well as in a geographical point of view; Mr. Cunningham being the original discoverer of the pass into the Liverpool Plains, and also connecting the Moreton Bay country with the colony of Sydney.

"In 1830, Mr. Cunningham returned to England, after an absence of seventeen years; and on the unfortunate death of his brother, Mr. R. Cunningham, who was killed by the natives while with Major Sir T. L. Mitchell's expedition to the Darling river, he accepted the appointment of Colonial Botanist, which his brother had held, and returned to Australia in 1837.

The situation not affording him those opportunities of research that he had anticipated, he resigned it at the end of the year, and in May, 1838, embarked for New Zealand, where he remained till October, when he returned to Sydney in a very debilitated state of health, from his constant exposure to the rains of that climate during the winter season. From that time his constitution continued gradually to break up, till death relieved him of his sufferings.

Few men have done more for botany and geography than Allan Cunningham, and his loss will be sincerely deplored by all who had the happiness to know him -
The Colonial Magazine and Commercial-maritime Journal, Volume 1 By Robert Montgomery Martin 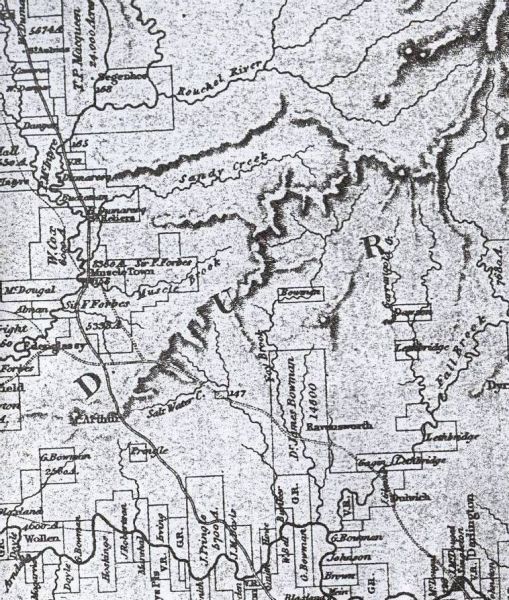 Cunningham's expedition departed from Dulwich (bottom right) and probably proceeded along the route shown above through James Bowman's Ravensworth to Muswellbrook; then to St. Heliers and on to Segenhoe.