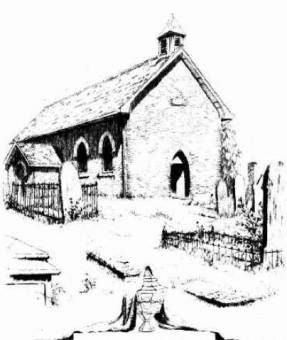 St. John's Church was built by convicts in 1833 and made of bricks from local clay deposits. The doors, floor, altar, pulpits, pews, balustrade and stairway were all made from cedar. The following History of St. John's Church at Stroud was published in the Sydney Mail in 1902. -

'In travelling through the Northern Rivers, perhaps one of the most interesting and ancient places one meets is the little town of Stroud. As far back as the year 1829, an appointment of an unusual character was offered to Sir W. E. Parry, by the directors of the Australian Agricultural Company in consequence of the neglect of their affairs by local agents, they having decided to obtain the services of a firm and able administrator to restore matters to a proper footing.

It had always been expected that the success of the company would greatly influence the prosperity of the colony, as by this time many free Englishmen were commencing to emigrate. Sir Edward accepted the offer, and landed in Sydney on December 13. 1829, and for four years filled the position of commissioner of the company.

The many good acts, stirring incidents, and daring adventures of this gentleman during his four years' sojourn would be too lengthy to attempt relating, and, doubtless, are worthy of pages in the history of our colony.

At Stroud, then the principal settlement of the company's large grant, Sir E. Parry laid the foundation stone of a memorial worthy of the character of the founder - a church - for the building and endowment of which Sir Edward and Lady Parry largely contributed. The ceremony of laying the foundation stone of St. John's Church took place on April 29, 1833.

Sir Edward not only took part in the building of churches, but frequently officiated as minister in the different churches throughout the company's estates. After his departure in 1834 the position was filled by Colonel Dumaresq, and he was followed by Captain (afterwards Admiral) P. P. King, who died in 1856.

For a period of over 20 years the little church was officiated over by the late Venerable Dean Cowper, and many little mementos left behind bear tribute of his deep regard by the people.

Over the west door of St. John's Church are the words 'St John's Chapel, erected by Sir W. E. Parry, R.N., A D. 1833,' and within, the architecture is of the Broughton' period, which the worshippers cherish with pride.

At the time of Sir E, Parry's residence there the town of Stroud was considered a near approach in appearance to an English village, the architecture of the buildings being very similar. The inroads of time have not effected much change, as with the exception of a few of the old 'land marks' (which have given place to less imposing structures) many ancient places remain. For many years the greater part of the A. A. Company's estate was locked up, and its valuable timber reserved from sale. Since the imposition of the land tax the lower end of the estate is being sold, and during the last two years over 100,000 acres have passed into the hands of private individuals'. - The Sydney Mail and New South Wales Advertiser (NSW : 1871 - 1912) Sat 19 Jul 1902

1). The stained glass window in the eastern wall was placed there in 1892 by R.H.D. White in memory of his mother, Sarah Elizabeth White, whose grave is located near the north eastern portion of the Church. Sarah White, was the wife of Mr. J.C. White, at one time the Company' Superintendent of Flocks and the daughter of Robert Hoddle who surveyed Melbourne.

2). The first ordained minister was Rev. William Macquarie Cowper (1836 - 1856) who later became Dean of Sydney. His wife is buried in the Church yard.

3). The corner-stone of the church was laid by Sir Edward Parry on 29 April 1833. The religious part of the ceremony was performed by Rev. Mr. Wilton, about 200 people including convicts and employees were present.[2]