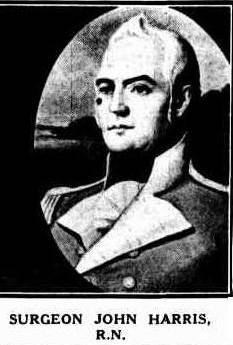 John Harris was born at Moneymore, County Londonderry, Ireland in 1754. He trained for the medical profession at the University of Edinburgh. For ten years was a surgeon in the navy in Indian waters. In 1789 he was appointed surgeon's mate in the New South Wales Corps. Upon arriving at Port Jackson in the Surprize in June 1790 he was stationed at Parramatta. [1]

Expedition to the Hunter River

In the beginning of last century Surgeon Harris loomed large in the Settlement. He was appointed an Acting Magistrate for the Territory by Governor Hunter and a member of the Orphan Asylum Committee.

In 1801 he accompanied Lieutenant Grant in the Lady Nelson on an historic surveying expedition to Hunter River and Port Stephens. Read an account of the expedition here

Soon after his return from this expedition Governor King appointed him naval officer vice Surgeon William Balmain who was returning to England.

John Harris was ordered to England as a witness in the trial of Colonel Johnston in the aftermath of the Bligh affair. While in England in 1813 he married Eliza Jones at Saint Paul, Covent Garden.

Return to the Colony

He brought his new bride to the colony on the General Hewitt in 1814.

By the time of his return, the New South Wales Corps had ceased to be part of the colony, however John Harris had no wish to remain in the army. He had received large land grants from both Acting Governor Grose and Governor Hunter and settled to a private life.

Jane Maria Cox (nee Brooks), third daughter of mercantile captain Richard Brooks and wife of Edward Cox of Fernhill Mulgoa gave a personal description of John Harris as he was when he returned to Australia ........'I must not forget to mention a Dr. Harris, who made one of the pleasant society in Sydney. In the first place, all Ultimo belonged to him, and there was a good house on it when he returned to this colony from England, where he had been summoned as a witness in the Bligh business, when he had married. He was a very merry man, and sang pleasant songs. He had been in the army from his youth. He had suffered from a paralytic stroke before we knew him, but he used to walk to old St. Philip's from Ultimo House very frequently. He kept no carriage. Mrs. Harris was a fine busy woman. She had no family, but a young nephew named John Harris used to reside with them, and she liked to have young people of his own age out in large parties.

Dr. Harris, although lame took it into his head that he would go out with Mr. Oxley and other gentlemen to explore the North of Bathurst. They travelled a long way, meeting with flooded country. They had boats with them, and were glad to meet with Mount Harris, which was named after him. He returned to Sydney before the rest of the party, and found that his wife had added extensively to Ultimo House. As he did not like living in so large a house, he let it, and retired to Shanes Park, a lovely spot on South Creek, where they both ended, their days. Dr. Harris was a great reader and a gentle man. '[2]

John Harris, Esq., formerly surgeon of the 102nd regiment of foot, commonly called the New South Wales Corps, the father of the Magistracy of the Colony, died at his seat at Shanes Park, on the South Creek, on Friday last. Dr Harris has left property worth £150,000 - the Ultimo estate belonged to him. [3]

1). {Extract from the obituary of Sir Matthew Harris} - .

The death of Sir Matthew Harris, which took place yesterday morning at a private hospital at Potts Point, after a short illness, removes a prominent citizen from our midst, and there will be widespread expressions of regret that a life of such usefulness has ended. Born at Magherfeldt, near the historic city of Derry, Ireland, in 1840, a son of the late Mr. John Harris, merchant. Sir Matthew Harris came out to Australia as a boy 2 years of age. His uncle, the late Dr. John Harris, a surgeon in the early days of Sydney, obtained as a Government grant some property near Circular Quay, and he also obtained grants of land in the Five Dock and Drummoyne districts, and later he purchased the Ruse land grant - the first farm in the colony - situated in the Parramatta district. Having no heir, Dr. John Harris bequeathed his estate to his brother, a resident of the province of Ulster. Sir Matthew, with other members of the family, came to Sydney as heirs to the Harris properties . [4]
2). Some Australian Pioneers - Sunday Times 17 September 1911