John Donohoe ('Bold Jack Donohue') was convicted of intent to commit felony in April 1824 in Dublin City. (1) It may be the same John Donohoe mentioned in the Dublin Evening May in February 1824 as being committed for attempting to steal pigs. John Donohoe was transferred from Dublin to Cork where he was probably incarcerated in the Surprise hulk to await transportation.

His description included in the convict indents states that he was 5ft 4 in with flaxen hair and brown freckled complexion. He was well behaved on the Ann and Amelia during the voyage to Australia.

The Ann and Amelia had been four months at sea after leaving Cork the previous September and carried 200 male convicts below her decks. With the others from the Ann and Amelia, Donohoe was disembarked and forwarded to the Appin district. By 1825 he was to be found in the Hunter Valley at Lochinvar, the estate of Leslie Duguid. (2)

Leslie Duguid was a young man with capital and recommendations sufficient to qualify him for a 2,000 acre land grant and convicts to work it. At some stage a cottage was erected on the estate and in July of 1825 when Donohoe was arriving in the Valley, Duguid's farm was robbed by bushrangers.

The notorious Jacob's Mob were active in the vicinity at this time and the exploits of 'Mr. Jacob's Irish Brigade' as the gang were first known probably impressed newly arrived Donohoe. They were Irish like Donohoe and their bravado and daring when they took to the bush after absconding from the properties of nearby settlers, encouraged sympathies amongst settlers who protected them. With little to lose, they intimidated the respectable and defied the authorities.

When Donohoe first absconded with William Smith and George Kildray (Kilray) the small gang did not much resemble Jacob's Mob. They were on foot, robbing the slow moving drays that travelled the pot holed roads and were soon captured (on the Richmond Road) and charged with highway robbery.

After a daring escape from custody of the gaoler, Donohoe joined with other desperadoes - Walmsley and Webber and together they formed a far more formidable gang. Donohoe and Walmsley first committed highway robbery in company in November 1828 when they robbed Mr. James Chilcott who had stopped for water while on the road to Hunter's River.

Their descriptions were posted in the Sydney Gazette..... One of the Men appeared to be an Englishman, of about 22 or 23 Years of Age ; about five Feet five Inches in height, a dark complexion, with jet black Hair and Eyes; he wore, at the time, a blue Jacket, Velveteen Trowsers, and a black Hat. The other Man is an Irishman ; about 25 Years of Age; about five Feet three inches High; with light complexion, almost sandy hair; small Eyes, and marked with Scrofula on the right Side of the Neck; he was dressed in a Nankeen Jacket and Trowsers, and a black hat.

After this they gained confidence and each as desperate and ruthless as the other, they were said to have terrorised travellers and settlers from Sydney to Liverpool and Campbelltown down to the Illawarra in the south, out to Yass and Bathurst in the west and to the Hunter Valley in the north.

They fell in with Mr. Clements at the Bulgar Road in April 1829, whom they fired upon and mortally wounded; it was said that Walmsley committed the deed as Clements had known him when at the Hunter's River, as an absentee working as a sawyer. Realising he was recognised, Walmsley fired the shot.

(Martin Cash in his memoirs, has a different version - The Bulgar Road ran along an interminable chain of hills for the distance of one hundred miles. Mr. Clements, on seeing three armed men some little distance ahead, observed to those in his company that he would ride up and capture them; and putting spurs to his horse, he rode on sharply in front. But not having far to ride before coming up with the party he was in pursuit of, the men in rear could see and hear distinctly what took place. On calling upon them to stand and throw down their arms, they laughed at him, which seemed to put him very much out of temper, and after repeating his command (which they still treated with derision), he took a pistol from his breast pocket, on seeing which, one of the bushrangers ordered him to 'put that back again', but on his attempting to cock it, one of the bushrangers shot him through the head.').

Donohoe, Webber and Walmsley may not have been responsible for all the robberies attributed to them. In July 1830 Donohoe was said to be in the vicinity of the Nepean however The Australian remarked -

'Like many a hero, we suspect Donohoe gets the credit of assuming more shapes and of doing much more mischief than he ever dreamed or was capable of.'

A robbery of two elderly tenants of Sir John Jamison near Regent Ville was attributed to Donohoe and his companion in September. After tricking the elderly men into admitting them, the bushrangers threatened to kill them with a blunderbuss.

'One of the robbers was dressed in a blue jacket, dark waistcoat and trowsers, worn out half boots, white shirt, coloured neckerchief, and black hat, about 4 feet 8 or 10 inches high, brown hair, well featured, but a dark or sallow complexion, with rather a melancholy cast of countenance, athletic and active, and about 28 years of age; he was armed with a blunderbuss and four pairs of pistols, secured in a belt under his jacket. The other was a low set squat man, rather younger, about 5' 6' inches high, broad faced, with a scar on the lip or under the left nostril, flaxen hair, complexion between fair and brown, rather freckled; he wore a blue jacket, light cord trowsers, coloured waistcoat, half boots, white shirt, no neckerchief, and black hat; he was armed with a double barrelled pistol, and three pairs of pistols fastened to a belt round his body, under his jacket. The tall man seated himself on a stool, with his back against the door, and directed the muzzles of the blunderbuss and double barrelled pistol and the two inmates of the hut, whilst the least of the robbers secured all the valuables to be found in it, consisting of four hams, some bacon, and salted pork, in all about 100lbs, between 30 and 40 lbs, of flour, 1lb of tea 16 lbs of sugar, 7lbs of tobacco, a blanket that was covering a little boy then in bed and two pairs of trowsers. The robbers then decanted a bottle of rum they brought with them into a tin, and with threats of instant death forced Hoe and Dunn to drink so freely that the latter became violent and the robbers tied their hands behind their backs, fastened their knees and ankles, and then bound them back to back.

The robbers then baked a cake, and fried enough pork for their supper; and after regaling themselves the low squat man piled wood on the fire until the blaze was nearly reaching the thatch, when old Hoe entreated them not to burn them alive. This caused the tallest of the robbers to find fault with the cruel intention of the other, and with a bucket of water he quenched the flame which otherwise, in a few minutes would have consumed the house, the old men lashed together and the boy asleep in his bed. The tall robber, who appeared to be an Englishman found fault with the unmerciful disposition of the squat flaxen headed robber, who spoke broad Irish and blasphemed, with murderous threats in all his actions. Barney Hoe asked them why they did not attack the houses of swells, where they would get more valuable property; they replied that swells kept bull dogs; and again, on observing Hoe looking minutely at them, they said they were well known, and knew well their fate if they were taken. The tall robber returned Hoe the trowsers, they being too small for him, and left a portion of pork, flour, tea, and sugar for breakfast and they went off with their booty.'

Details of Donohoe's fate were recorded in the Sydney Gazette in September:

'This daring marauder has at length been met by that untimely fate which he so long contrived to avoid. On Wednesday evening, at dusk, as a party of the Mounted Police were riding through the bush at Reiby, near Campbell Town, they came up with three bushrangers, one of whom was Donohoe; on being called upon to stand, they threw away their hats and shoes, and ran off, when the Police fired, and killed Donohoe on the spot, one ball entering his neck and another his forehead. Favoured by the dusk, the others made their escape, and in defiance of the dreadful fate of their comrade, that very night broke into a hut and carried off what they wanted. 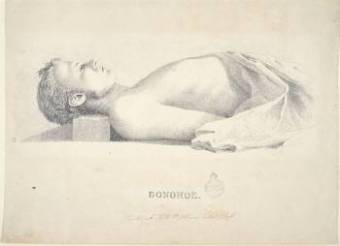 The body of Donohoe was removed to Liverpool, and will be brought to Sydney this morning. Thus is the colony rid of one of the most dangerous spirits that ever infested it, and happy would it be were those of a like disposition to take warning by his awful fate.'

An inquest was performed on the body of John Donohoe by Major Smeathman the coroner at the Fox and Hounds in Castlereagh Street, Sydney and later a Plaster of Paris case was made by Morland.

Sir Thomas Mitchell is said to have made the Pencil drawing above while the body of Donohoe lay in the morgue.

A product of the times, Donohoe was defiant, brutal and sometimes dangerous. In death his deeds were glamorised and perhaps exaggerated; ordinary folk may have envied his apparent charmed life, and with the help of the press of the day the name John (Jack) Donohoe passed into Australian folk lore.

The ballad 'Bold Jack Donohue' once banned in Sydney taverns, came to represent an enduring popular perception of Australian bushrangers.

Come all you gallant bushrangers who gallop o'er the plains
Refuse to live in slavery, or wear the convict chains.
Attention pay to what I say, and value if I do
For I will relate the matchless tale of bold Jack Donohue.

Come all you sons of liberty and everyone besides
I'll sing to you a story that will fill you with surprise
Concerning of a bold bushranger, Jack Donohue was his name
And he scorned to humble to the crown, bound down with iron chain.

Now Donohue was taken all for a notorious crime
And sentenced to be hanged upon the gallows tree so high
But when they to him to Bathurst Gaol, he left them in a stew
For when they came to call the roll, they missed Jack Donohue.

Now when Donohue made his escape, to the bush he went straight way.
The squatters they were all afraid to travel by night and by day
And every day in the newspapers, they brought out something new,
Concerning that bold bushranger they called Jack Donohue.

Now one day as he was riding the mountainside alone
Not thinking that the pains of death would overtake him soon.
When all he spied the horse police well on they came up into view
And in double quick time they did advance to take Jack Donohue.

'Oh Donohue, Donohue, throw down your carbine.
Or do you intend to fight us all and will you not resign?'
'Surrender to such cowardly dogs is a thing that I never would do,
For this day I'll fight with all my might', cried Bold Jack Donohue

Now nine rounds he fired and nine men down before that fated ball
Which pierced his heart and made him smart and caused him for to fall
And as he closed his mournful eyes, he bid the world adieu,
Saying 'Convicts all, pray for the soul of Bold Jack Donohue.'