Leslie Duguid was twenty years old when he first arrived in Australia on the William Shand in October 1822. He had been recommended as a free settler and was made a grant of 2,000 acres of land, this being the first of several grants.

In correspondence dated 4th December 1822 Major Morisset, commandant at Newcastle was informed that the following men were granted permission to proceed to Newcastle on the brig Minerva:

It was probably on this excursion that he made the selection of land shown on the far lower left of the map above.

On arrival in Newcastle the men would have stepped out onto a wooden wharf. They would have seen the handsome stone built church high on the hill and cottages dotted throughout the settlement. Convict chain gangs worked about the town with soldiers of the 48th regiment guarding them.

Leslie Duguid was one of the first landholders to take up an allotment in the town of Newcastle.

Select here to find out more about some of the buildings in Newcastle in 1822.

After a voyage to England, Leslie Duguid returned to New South Wales on the Nassau in May 1825. He was employed at the Bank of Australia in Sydney and although he did not live permanently at his country estate at this time, he regularly visited and was involved in local social events and donated to worthy causes, such as the building of a new Church.

According to correspondence by James Mudie, Duguid's farm was raided by bushrangers on 21st September 1825....... Overseer Martin Dealy gave a Declaration about the bushrangers.- State Records NSW

Jack Donohoe who later became one of Australia's best known bushrangers was assigned to the Lochinvar estate in July 1825.

In July 1834 Leslie Duguid's estate was robbed by bushrangers - The Sydney Herald reported that on night of the 10th of December, three bushrangers were taken on the estate of Lochinvar by Leslie Duguid, Esq., assisted by two men of the mounted police. At the time of their apprehension, the runaways were regaling themselves with a newly killed calf, with the addition of sundry vegetables in abundance.

A cottage was built on Duguid's Lochinvar estate and maintained by an overseer. In 1828 John Burke was employed as overseer at the estate. Select here to find some of the convicts assigned to Leslie Duguid at Lochinvar

Leslie Duguid married the 'amiable and accomplished' Miss Ann Scargill, 2nd daughter of the late Captain Scargill of 22nd Regiment, at St. James Church, Sydney in July 1830. Ann Scargill arrived as a cabin passenger on the Asia in 1822, a fellow passenger of James Reid and his daughters.(Select here to read White Family Letters, Mitchell Library MSS 1806 transcribed by Susan Tracey, in which mention is made of Miss Scargill (1828).

Later in 1834, Duguid became the Managing Director of the Commercial Banking Company of Sydney. In 1847 the profits for the half year amounting to thousands of pounds were lost. Duguid was suspended from the position of Managing director and involved in insolvency proceedings at his estate at Cook's River. 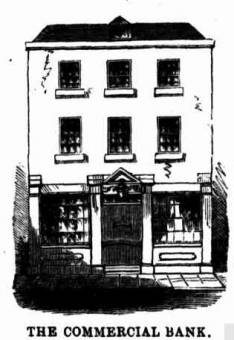 In 1840 the estate of Lochinvar was sold - Sydney Herald - This splendid Hunters' River estate will be brought to the hammer by Mr. Smart at twelve o'clock 2 April 1840. The property has been divided into seventy five small farms of different sizes, besides a number of village allotments. A very neat lithographed plan of the estate had been published. -

The Colonist recorded the results of the auction: Lot 1, 118 acres with Homestead, Garden, Orchard, etc was sold to James Forbes Beattie Esq., for £1950. (On this lot is erected a substantial brick building, which a little expense in repair would convert into a comfortable residence, of four rooms with a pantry, kitchen, roomy store, cellar, dairy, and servants apartments, having a granary above 80 ft in length. Attached to the house is a well fenced and well filled garden and orchard - vines, oranges and lemons and capable of being made to yield £200 per annum from fruit alone. There are stables, blacksmiths' shop and huts on this lot which is bounded on the north by the River Hunter, and on the south principally by Loch Kalrine, and nearly the whole of the ground has been under cultivation Sydney Gazette)

The house was the subject of a painting shortly after it was sold to J. Beattie. The image shows Aboriginal people on the banks of Kaluda creek. The house is in the centre back of the picture. The only outbuildings pictured were in the front and a long pathway or road runs up to the entrance of the house with perhaps a young orchard on either side. (Aboriginal Heritage Assessment Lochinvar Urban Release Area Hunter Valley, NSW)

The Lochinvar estate was sold by J.W. Buckland junior in 1858 and at that time the dwelling house was described as a substantial brick building, containing front verandah, eight rooms and pantry with detached kitchen. Immediately behind the house were the farm buildings including a large store, fitted with counter; a harness room and shed with four stall stable forming one rang. There was a new press house; extensive cellarage with a loft over, still house, dairy forming another range of buildings. At the rear of these were buildings consisting of cottages for labourers, carriage house, cart sheds, stabling, large barn with yards attached and beyond these again were the stockyards, milking yard and pigsties. The orchard was situated at the front of the house.

Part of the Lochinvar estate was named Kaluda. In 1933 the Kaluda estate (520 acres) which had been in the Doyle family for more than 75 years was sold by auction. It was purchased by Mr. A. Gurr of Rothbury.