September 1797 - This month began with a very vexatious circumstance. A boat named the Cumberland*, the largest and best in the colony belonging to the government, was, on her passage to the Hawkesbury, whither she was carrying a few stores, taken possession of by a part of the boat's crew; being at the same time boarded by a small boat from the shore, the people in which seized her and put off to sea, first landing the coxswain and three others, who were unwilling to accompany them, in Pitt Water in Broken Bay. Those men proceeded overland to Port Jackson, where they gave the first information of this daring and piratical transaction. Two boats, well manned and armed, were immediately dispatched after them, under the command of Lieutenant Shortland of the Reliance.

One of these boats returned in a few days, without having seen anything of them; but Lieutenant Shortland proceeded with the other, a whale boat, as far as Port Stephens, where he thought it probable they might have taken shelter; but on the 19th, having been absent thirteen days, he returned without discovering the smallest trace of them or the boat. His pursuit, however, had not been without its advantage; for on his return he entered a river which he named Hunter River, about ten leagues to the southward of Port Stephens, into which he carried three fathoms water, in the shoalest part of its entrance, finding deep water and good anchorage within. The entrance of this river was but narrow, and covered by a high rocky Island, lying right off it, so as to leave a good passage round the north end of the island, between that and the shore. A reef connects the south part of the island with the south shore of the entrance of the river.

In this harbour was found a very considerable quantity of coal of a very good sort, and lying so near the water side as to be conveniently shipped; which gave it, in this particular, a manifest advantage over that discovered to the southward. Some specimens of this coal were brought up in the boat .

- D. Collins, An Account of the English Colony in New South Wales, from its First Settlement, in January 1788, to August 1801: with Remarks on the Dispositions, Customs, Manners, Etc of the Native Inhabitants of that Country, London, 1802, vol. II, pp. 47 - 8.

Coal Found at the South Head

Matthew Flinders in A Voyage to Terra Australis published in 1814 also reported Lieutenant Shortland entering the river on the return from Port Stephens....

In September a small colonial vessel having been carried off by convicts, Lieutenant John Shortland, first of the Reliance, went after them to the northward, in an armed boat. The expedition was fruitless, as to the proposed object; but in returning along the shore from Port Stephens, Mr. Shortland discovered a port in latitude 33 capable of receiving small ships; and what materially added to the importance of the discovery was a stratum of coal found to run through the south head of the port.

About twelve months since I went on an expedition in the Governor's whale boat as far as Port Stephens, which lies 100 miles northward of this place. In my passage down, I discovered a very fine river, which I named after Governor Hunter. The enclosed I send you, being an eye sketch which I took the little time I was there. Vessels from 50 to 250 tons may load there with ease, and completely landlocked. I daresay in a little time this river will be a great acquisition to this settlement. The short time we remained at this river we had rain, which prevented my doing as much as I otherwise should - J. Shortland.

On the map Lieutenant Shortland noted where they had slept which was not far from a native tribe. He states the date he discovered the river as 10th September 1797.......

I judge this river lays N.N.W true 63 or 65 miles from Port Jackson. Discovered this River September 10, 1797, in our way to Port Stevens. 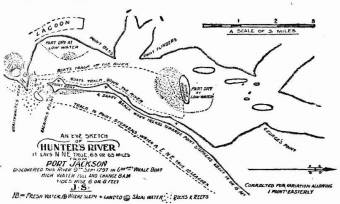 This map would have been of particular interest to Lieut. John Shortland senior as he had sailed this coastline nine years before and regretted then that it had not been surveyed.

Lieutenant Shortland (senior) had sailed in command of the Alexander in July 1788 in company with the Prince of Wales, Borrowdale and Friendship transports, all intending to return to England.......

It was unanimously agreed that the vessels should sail northward through Torres Straits as the season was too advanced for them to attempt the southern course. On the morning of July 11th, 1788, Lieut. Shortland, in the Alexander, sailed from Port Jackson and outside the Heads joined company with the other three transports. Intending to touch at Lord Howe Island, the course directed was E.N.E., but unfortunately the vessels had no instructions where to rendezvous in case of separation. When the vessels cleared the port they were compelled to carry a press of sail in order to get off the coast, as they were very light and there was a powerful southerly current setting in upon the shore. They experienced fresh gales with rain from the south east for two days, which with the heavy swell, made it very difficult to keep clear of the shore, and that shore was within the neighbourhood of the coast of Newcastle.

When off Port Stephens Lieutenant Shortland (senior), recorded in his journal:

'About 8am on the 16th July, 1788, the rocks off the entrance of Port Stephens bore N.W. by W., distant three leagues. He then writes that he regretted ' very much that this place has not been surveyed; had it been known to afford safe anchorage, it would have been much more prudent to have put in there and wait for a change of wind than to attempt keeping the sea in circumstances so very unfavourable with ships so little calculated to run along so great extent of lee shore. '

When off the port he fired guns and made signal for the vessels to rendezvous at Lord Howe Island, but some of them failed to see the signals. The Prince of Wales and Borrowdale were seen no more by Lieut. Shortland throughout the voyage they having taken the southern course round Cape Horn to Rio de Janeiro. [3]

Governor Hunter to the Duke of Portland

Extract from The Historical Records of Australia -

Governor Hunter to The Duke of Portland,
10th January 1798.

I have now to inform your Grace that on the fifth day of September last, as our largest and best boat belonging to Government, was on her way to the Hawkesbury River, carrying thither a few stores, and to bring from thence some articles wanted here, a service on which she was constantly employed, she was taken possession of by a part of the crew, assisted by a few men in another boat, who threatened the life of the coxswain and all who dared to oppose them. They put him and three others on shore at Broken Bay, and went off with the boat we know not whither. And as another party of those villains went off some time after in another boat, and the very men who were landed from the first, as unwilling to go, were a part of the second gang, I am of opinion it had been a long concerted plan. Not having any fit vessel to pursue upon such occasion, I dispatched two row boats, well-armed; the one went about sixty miles northward along the coast and the other forty miles southwards, but without success, a gale blowing soon after the escape of the second boat, which obliged the officer in pursuit to land upon the coasts. There is is every reason to believe that the last party have perished, as the vessel was very feeble. Most of those people were of the last Irish convicts .[2]

1). *A schooner of 28 tons also named the Cumberland was built in Port Jackson during the years 1800 - 1801 under the supervision of Thomas Moore. When he was in command of this vessel, Matthew Flinders was arrested and imprisoned at the Isle of France (Mauritius) HRA., Series 1, vol. II, Note 47, p.712

2). In 1947 Newcastle celebrated 150th year anniversary of the landing of Lieut. Shortland with a parade through the streets. The image below is a still from 'Moving Memories 1920's To The 1990's in Newcastle' https://youtu.be/urqXhcWvNY8 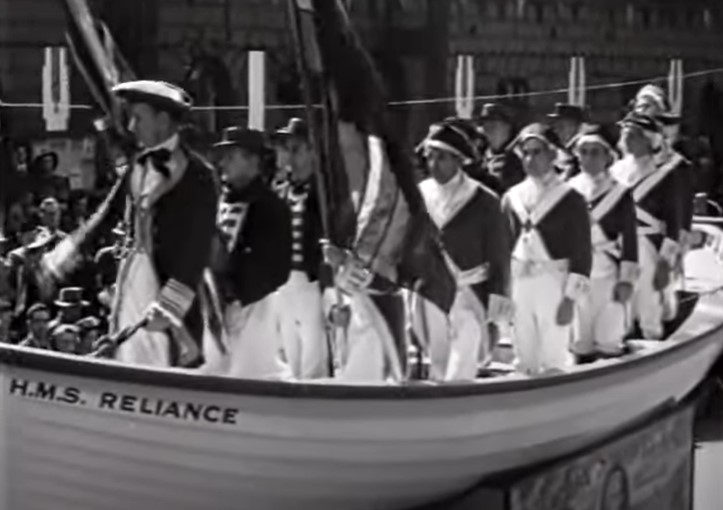