Three hundred male prisoners were embarked on the Randolph on 12th, 14th, 17th, 18th and 26 April 1849. The wives of the prisoners of the Hashemy and Randolph were to be shipped on the Panama which sailed from London for Port Phillip and Sydney in the middle of May. [1]

The Guard on the Randolph consisted of of soldiers and their families of the 11th and 58th Regiment and numbered sixty-six people.

The Randolph departed England bound for Port Phillip and Sydney on 28th April 1849.

In consequence of the death of Surgeon Superintendent Harry Goldney who had been suffering from Erysipelas, the ship put into Simon's Bay on the 4th July for medical assistance and Walter Lawrance was appointed to her on the 5th July 1849.

Walter Lawrence kept a Medical and Surgical Journal from 5 July to 28 August 1849. He recorded in his journal that there were five case of erysipelas before reaching the Cape and eight cases of the same disease after the vessel departed from the Cape. Of the eight cases he treated three were cured, three were sent to hospital and two died on board. Another prisoner died of pulmonary disease and another of dysentery and another of ramollissement cerebri.

The Randolph arrived at Port Phillip on 8 August 1849 with 295 male prisoners, however they were refused permission to land. The Courier (Hobart) reported the incident........

The Randolph, W. Dale, from Woolwich 28th April with exiles and a detachment of the 58th and 11th regiments, arrived at Port Phillip on the 8th instant, and notwithstanding an order had been given by Mr. Latrobe, that no convict vessel should pass the Heads, the Randolph was anchored at William's Town. Intelligence has arrived via Launceston that public demonstrations had been made against their landing, and it was reported that &pound500 had been subscribed to defray the cost of conveying the exiles elsewhere, and that the ship was to proceed to Sydney. 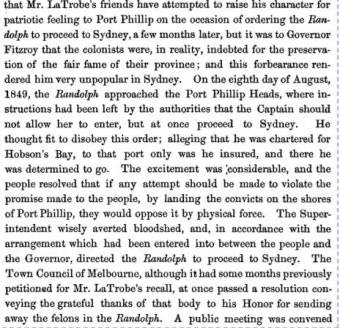 Two of the prisoners died on the passage from Port Phillip to Port Jackson, one of dysentery and the other of brain fever.

The Sydney Morning Herald reported - 'There are applications lodged with the Superintendent of Convicts for more men than he is able to supply. A great number of the convicts by the Randolph were engaged yesterday, and by this evening they will probably all be engaged. Forty of them were sent to the Clarence River last night by the steamer Phoenix at the expense of the Government. The remainder will be forwarded to their respective destinations at the expense of the parties engaging them.' [3]

Twenty-one of the men went to Maitland in the steamer on 24th August and seventeen the following day having been engaged by John Eales, Captain Dumaresq, Donald McIntyre, Captain Russell of the McIntyre River, Mr. Allan Macpherson and James Hale of Wambo [4]

Another nine prisoners were forwarded to Parramatta by the midday steamer on 27th August. They were under engagement to John Hosking near Liverpool however were allowed to visit a public house and became drunk and had to be lifted into a cart even before they reached the centre of the town. They were later taken before the Magistrate but allowed to leave. Another four men from the Randolph passed through the town the following day under engagement to Mr. Cox of Mudgee. [6]

On 29th August thirty-seven men arrived at Morpeth on the steamer and found their way to the Maitland race course. Of these men, there were nine who stated on arrival that they had paid their own passage up and that they were free to engage or go where they liked. No person came up in charge of them, but it is understand the remainder came up under engagement Mr. Bettington, Henry Dangar, William Dangar, Captain W. Russell and Mr. Brodie. Only twelve reported themselves at the police office in Maitland. [7]

1). Prisoners and passengers of the Randolph identified in the Hunter Valley region

3). In November 1849 Dr. Lawrence was accused of improperly treating a sailor by the name of Michael Medini who later died. Bell's Life in Sydney reported the case.....{Extract} At the time of Medini being reported sick, the Doctor's time was incessantly occupied in the heavy duties consequent upon preparing for the muster of the prisoners, paying into their hands their money of which he had charge, discharging them to their respective services, making up the accounts of his predecessor, and all the necessary arrangements contingent upon the unusually rapid disembarkation and distribution of nearly 300 prisoner. The pressing demand by employers for the men per Randolph no less than six clerks were constantly engaged, from the moment of the mustering of the men until their discharge from the ship, in making the necessary records. During this time Dr. Lawrence was busily occupied in finally completing the duty which he had volunteered after the untimely death of his unhappy predecessor. Bell's Life in Sydney 17 November 1849

[8] McCombie, Thomas, The History of the Colony of Victoria: from its settlement to the death of Sir Charles Hotham. p.174