The Pekoe was built at Dundee in 1834. [2] She was the next convict ship to leave Ireland for New South Wales after the departure of the Margaret in April 1840.

The Military Guard consisted of 29 rank and file, 5 women and 11 children of 96th regiment under orders of Lieut. Curren and Ensign Kenny. They were received onto the Pekoe on the 3rd and 4th June 1840.

On the 23rd June the Pekoe anchored in Kingstown Harbour, Dublin and two days later 100 male prisoners were embarked. On the 27th June, eighty one more were received on board together with two little boys, sons of two of the prisoners.

On the 29th June four of the prisoners previously embarked were taken on shore again and three others were sent in lieu of them, leaving on board 180 prisoners and the two free little boys by the names of Matthew Woods [1] (son of Michael Woods of Co. Louth) and Patrick McArdle (son of James McArdle of Co. Donegal).

By 13th September symptoms of scurvy were evident and they into Simon's Bay where they remained a week.

There was a great deal of boisterous rainy weather between the Cape of Good Hope and St. Pauls and the ship was frequently very wet between the deck from shipping seas. [1]

The Pekoe arrived in Port Jackson on 7 November 1840.

The convicts were mustered on board the vessel on Wednesday 11th November and landed on Thursday 12 November.

One hundred and eight-seven men including 10 who had been embarked at the Cape were marched to the Hyde Park Barracks. 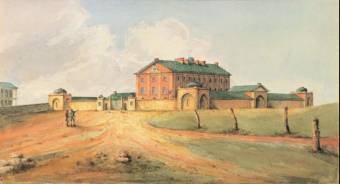 
From there they were to be transferred to the service of settlers to supply the urgent demand for labour to assist in getting in the harvest.


1). Convicts / passengers of the Pekoe identified in the Hunter Valley region

3). National Archives. Reference: ADM 101/58/6 Description: Medical journal of the Pekoe, male convict ship for 3 June to 12 November 1840 by Robert Bower, surgeon superintendent, during which time the said ship was employed in a voyage to New South Wales.