Many had been tried at the Old Bailey and held in Newgate prison prior to embarkation.

French Traveller Louis Simond visited Newgate prison on his tour of Great Britain in 1810 / 1811. He described the ladies of Newgate in Journal of a Tour and Residence of Great Britain....... 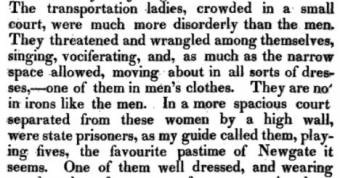 According to the 1825 muster, the Greenwood family - James and Anne and sons John and James and also Charlotte Tindall came as free passengers on the Friends [4]

Jane Sims who had been appointed Midwife to the colony and her son Alfred Sims who was later employed as chief constable at Bringelly and......

Edward Smith Hall and wife Charlotte. Edward Smith Hall received a grant of 700 acres at Bringelly; he was a member of the Governor's Court in July 1813, April 1814 and January 1816; he helped found the New South Wales Society for Promoting Christian Knowledge and Benevolence in 1813 and the Benevolent Society of New South Wales in 1818; he was cashier of the Bank of New South Wales from February 1817 to March 1818 and Coroner from 1820 to 1821; in addition to Bringelly, he held land at Lake Bathurst, Surry Hills and Moore Park. [5]

The Friends England early in April 1811 and sailed via Rio de Janeiro.

The Sydney Gazette later reported that she had a tedious passage to Rio. She sailed from England five weeks before the Admiral Gambier, but arrived at Rio a week after her. From Rio the two ships sailed in company the 29th July, and continued together till the 8th August when they parted [3].

The Friends arrived in Port Jackson on Thursday 10th October 1811 with 100 female prisoners all in a healthy state.

At 10 o'clock on 11th October the Colonial Secretary John Thomas Campbell and the Acting Commissary accompanied by the Principal Superintendent of Convicts William Hutchinson went on board the Friends in order to muster the female prisoners. The women were to each receive a new suit of slops under the supervision of the Acting Commissary who was to ensure that the slops were delivered to the women.

Those who were to be assigned as indented servants to settlers and other residents in Sydney were landed in the forenoon. They were delivered over to their Masters or Mistresses who had previously presented the prescribed Bonds.

The remaining women were sent by boats up to the Factory at Parramatta soon afterwards.

Lieutenant Robert Durie, in command at Parramatta was sent a list of the women who were to be employed at the factory.

'I have to inform your Lordship that I have, on all arrivals of convicts ships, ordered a muster to be immediately taken of the convicts on ship board by my Secretary and the Acting Commissary, and I afterwards take a muster of them myself so soon as landed, in order to ascertain the manner they have been treated during the voyage, and whether they have any complaints to prefer against the commander or surgeon of the ship in which they came. By the previous muster I also acquire a knowledge of the trades or professions of the convicts, which enables me to appropriate them afterwards in the most advantageous way for Government, and at the same time most easy for themselves. I have much satisfaction in reporting to your Lordship that the convicts arrived by the four ships Indian, Providence,
Admiral Gambier and Friends were in general in good health, having been well treated on board, and had no complains to make against either the commanders or the surgeons.' [2]

The following February (1812) Commissary William Broughton gave notice that the convicts of the Admiral Gambier and Friends who were employed at Government labour were entitled to the summer issue of clothing only. This consisted for the men of One duck frock, one pair duck trousers, one cotton shirt, one pair of shoes and one leather cap; and for the women, one linen cloth jacket, one shift, one pair of shoes, one straw bonnet.

1). Prisoners and passengers of the Friends identified in the Hunter Valley

4). Ann Walter who arrived as a convict was mentioned by Governor Macquarie to Under Secretary Peel in correspondence dated 18th October 1811 when Gov. Macquarie indicated he would show every degree of indulgence consistent with her situation and to endeavour to alleviate her sufferings as much as he could. (HRA, vol. VII, p.448)

5). Mary Irwin of the Friends was sent to Newcastle penal settlement for an unknown crime in March 1812 six months after arrival. Lieutenant Scottowe was Commandant at Newcastle at this time. There were few women at Newcastle in these early days. however the following had been sent for various crimes in 1811/1812 and may have still been there when Mary Irwin arrived -

[1] Journal of a tour and residence in Great Britain, during the years 1810 and 1811 By Louis Simond