In convict records Patrick Montgomery was also known as Peter Montgomery. In newspaper accounts over the thirty years of his time in the colony, his last name was also occasionally recorded as Montgomerie. Often he was referred to only as Dr. Montgomery or Dr. Montgomerie.

Patrick/Peter Montgomery was tried in Glasgow on 7th April 1830 and sentenced to 14 years transportation for forging notes. The convict indents reveal that he was born in Ayreshire in 1796 and was married with a child at the time of his arrest. He was 34 years old, 5ft 8 in., with a fair ruddy complexion, light hair and grey eyes.[1]

He was received onto the Dolphin Hulk at Chatham on 17th May 1830 with fifteen other prisoners from Edinburgh. He was transferred from the hulk to the convict ship Florentia for transportation to New South Wales on 4th August 1830.[2]

The Florentia arrived in Port Jackson on 15 December 1830. On arrival Patrick Montgomery was assigned to work at the Liverpool Hospital and therefore was one of the early workers employed at the new hospital 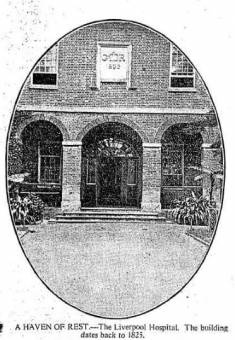 It is not known how long he stayed at Liverpool Hospital, however over the next thirty years he moved around quite a bit. There are reports of him at Patrick Plains, Port Macquarie, Macdonald River, Liverpool Plains, Newcastle, Hyde Park Barracks, Maitland, Black Creek, Armidale, McIntyre River Rocky River and Scone.

He was recommended for a Ticket of Leave for the district of Port Macquarie in September 1836 on the recommendation of the Patrick Plains Bench. The Ticket was dated February 1837.

In February 1844 the Maitland Mercury reported a case of Mark Johnson who was accused of opening mail. The letter had been entrusted to his care by Dr. Montgomery at the MacDonald River and addressed to William Lipscombe at Maitland and supposedly contained two cheques which were missing.[3]

Shortly afterwards Patrick Montgomery was found illegally at large in the border districts of the Liverpool Plains without a pass. He was immediately apprehended.

He was only a few months from freedom, however he was taken all the way back to Newcastle where he was admitted to Newcastle gaol on 23rd February 1844[4]. He was ordered to Hyde Park Barracks to be dealt with and then to be sent to Port Macquarie. His ticket of leave was cancelled.

By this time he was 47 years of age. Information on the Certificate of Freedom that was issued a few months later on 6th May stated that he had lost three of his front upper teeth and that his hair was grey. [5]

In May 1844 he announced his intention to journey overland to the New England: - Mr. Peter Montgomerie, Surgeon and Accoucheur, from Scotland, acquaints the ladies and gentlemen of New South Wales, that he will leave Sydney by the first steamer, giving advice gratis at Maitland, Anvil Creek, and all the townships on his way to New England, previous to his departure.

In 1851 his address was Bukkulla, McIntyre River when he placed a notice regarding a horse missing from Nullammanna run New England. Bukkulla was the grazing run of George Wyndham. [7]

Dr. Montgomerie, before retiring returns his sincere thanks for past favours to the inhabitants of New England, and hopes they will bestow the same patronage on his successor, Mr. James Watson who will be in attendance at his Residence, on the Macintyre River, as soon as he can arrange his affairs. [8]

He was reported to be only visiting Sydney in November 1852 when he was called on to treat a patient and attend a subsequent inquest. [9]

In September 1856 he moved to the Armidale district where he entered into a partnership with Dr. Morris - this is to acquaint his friends and the public that he has removed from the Macintyre River to Armidale and the Rocky River, New England [10]

In 1859 a miner named Kelly at Crawley's Rush who had been injured by a rock fall at the Rocky River diggings was treated by Dr. Mongomerie[11]

The weather at the diggings in the winter of 1859 was dreadful...a correspondent described the conditions - The last has been the most miserable cold, bleak, bone chilling week that has ever been experienced on the Rocky, the weather being made up of high winds, rains, snow, sleet and everything else known as requisite to make a life on the diggings miserable. The wind blew so very high that tents, flies, and bark huts, were rent asunder, and many of them carried high into the air, and got so confused in their aerial flight that upon descending to terra firma it was with difficulty the owners could recognise their own property. The damage done to crinolines I am not in a position to report, but I can easily solve the problem which travels quickest - heat or cold - as too many of us have caught the latter, to the no small gratification of Dr. Montgomerie, who now has his hands full.[12]

On Friday morning last, as Dr. Montgomery residing at the Rocky River, was proceeding in a one horse cart towards Scone, having come from Sydney and when within a short distance of Mr. Johnson's hotel at Scone, he fancied the horse's winkers were not exactly right and dismounted to adjust them, but had no sooner got near the horse's head than the animal (a large and powerful beast he had lately purchased) became unmanageable, and in his freaks ran the doctor violently against a fence, jamming him by some means so seriously as to break his left leg some two inches above the ankle. The horse then turned upon the road, and was ultimately secured. Assistance was at once procured, and the unfortunate gentleman was conveyed to the St. Aubin's hotel. Subsequently Dr. Beamish was called in, who pronounce it a compound fracture, and under his care the sufferer is now dong as well as can be expected being a gentleman of advanced years. [13]

The Maitland Mercury reported in March 1860 - This unfortunate gentleman who met with an accident five weeks back by his horse running him against a fence, and breaking his left leg below the knee, had to undergo on Thursday the operation of amputation. The operation was skilfully performed by Drs. Thornton and Scott, in the presence of several leading gentlemen of the district.

Dr. Montgomery had been attended by Dr. Beamish, who now lies in Maitland gaol awaiting his trial for manslaughter, particulars of which are now fresh in the minds of your readers.

Subsequent to the operation being performed, the limb was carefully examined by the medical gentlemen above named, who decided that, to save the life of the sufferer, it was necessary to take the leg off, which Dr. Montgomery freely consented to be done today. The feeling in the public mind with regard to this particular case, is very much excited against Dr. Beamish. Dr. Montgomery is an aged man, and at present is as well as can be expected. We hope the sufferer will be strong enough to bear the shock, and speedily get round now the diseased limb is removed.[14]

Peter Montgomery died at the St. Aubin's Arms Hotel, Scone on 6th March 1860 and was buried in St. Luke's Churchyard at Scone.[15]


1). The abovementioned Dr. Samuel Stephen Beamish was born in Cork in 1812 and arrived in Melbourne in 1854. He was sentenced to 12 months in Darlinghurst gaol for the manslaughter of Bridget Taylor in March 1860 (Empire, 29 February 1860). He was admitted to the Maitland gaol and his description is included in the gaol entrance book in 1860 : 5ft 10 1/2in; fresh complexion, slight build, sandy hair, blue eyes, bald, lost some front teeth.