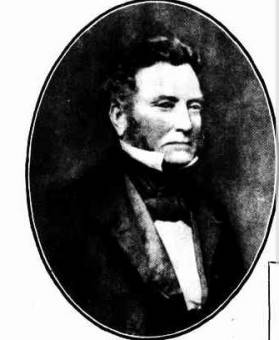 Archibald Mosman and his twin brother, George, were born on 15 October 1799 on the Auchtyfardle estate, near Les- mahagow, Scotland. They were the younger sons of Agnes and Hugh Mosman, Deputy Lord Lieutenant of Lanarkshire, and in their early twenties went out to the West Indies as sugar planters.

Archibald and George Mosman arrived in New South Wales on the 347 ton brig Civilian on 24 August 1828. Once in Australia Archibald became involved in both the whaling and pastoral industry. 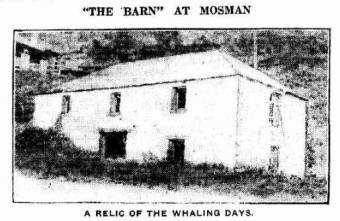 Described as a solid grey stone building with a roof of greenish-grey corrugated iron, 'The Barn' was a store used for the whaling industry by Archibald Mosman and Captain Bell.

It was built on land that in 1832 Mosman secured at the head of Mosman Bay for £37/10s on condition that he put a substantial building and wharves on it. The rings in the rocks were used for the mooring or heaving down of vessels. Reasons for ordering the removal of whaling headquarters to this remote and almost uninhabited region to the north of the Harbor were explained in a letter the Colonial Secretary, Macleay, wrote to Surveyor-General Mitchell on January 7, 1830: 'It is considered that it will be sufficient under present circumstances to appropriate certain parts of the North Shore of Port Jackson for the establishment of persons entering in to the Whale Fishery, as the most convenient and suitable place for such establishments, and as it will be the means of preventing (which is an object of importance in this climate) the nuisance occasioned by establishments of this nature being more intimately connected with the Town of Sydney.' [1]

Archibald also acquired the estate Abbey Green near Singleton, having purchased it from Alexander Warren.

In 1838 Archibald, who had long since bought out his brother's interests, sold his own and moved to the New England district.


He acquired Furracabad station near Glen Innes after the previous owner Archibald Clunies Innes ran into financial difficulties in the depression of the 1840s and his properties were taken over by the Bank of Australasia. Archibald Mosman purchased the station from the bank in 1854.


2). Jackey, alias Wong-ko-bi-kan, an aboriginal native, was indicted for the wilful murder of John Flynn (arrived per Jane), by wounding him with a spear at William's River, on the estate of Archibald Mosman on the 3rd April 1834, of which wound he lingered until the 6th following, and then died. (R. v. Jacky Jacky - Decisions of the Superior Courts of NSW)

3). Relic of Archibald Mosman - One of the oldest buildlings in Mosman, with many historic memories attached to it was completely burnt out last night, despite the efforts of the Mosman and Neutral Bay fire brigades. It was the squat stone structure well known as Mrs. Lewis's refreshment rooms, beside the bridge at the loweer end of Avenue road. It was owned by Mr. Rabone, of Military road, Mosman.
The building was erected in the thirties by the late Mr. Archibald Mosman, after whom Mosman Bay was named. It was principally used in the old whaling days to provide accommodation for crews of ships that were hove to there and careened. At that time several of the rooms were fitted after the fashion of a ship's fo'csle, with tiers of bunks against the walls. - The Sun 30 January 1914

4). In St. Jude's cemetery Randwick, is an old fashioned monument of the altar type to 'Archibald Mosman, died January 29 1863 aged 64 years'.
On the other side is inscribed:

'In memory of Harriett Mosman, died in London, August 24 1883; aged 63 years. Buried here with her husband and children at her own request'
Mr. Mosman was a wealthy breeder of cattle and jumbucks. His widow married the station overseer and went to reside in England. On her death she desired that her remains should be brought to Sydney and placed alongside her first husband. There is no mention on the memorial of the second husband. - Truth 8 June 1902

5). The historic building, recently acquired as the headquarters of the Mosman Boy Scouts, was originally part of Archibald Mosman's whaling station, and was built in 1831.Sydney Morning Herald 16 April 1928

6). One of Archibald's sons Hugh Mosman who was born at The Nest led the prospecting expedition that discovered the Charters Towers goldfield. He was later a member of the Legislative Assembly in Queensland. Two of Archibald Mosman's daughters married prominent Queensland politicians. Sir Arthur Palmer and Sir Thomas Mcilwraith, each of whom was afterwards a Premier of Queensland. Sydney Morning Herald 11 July 1931

7). Mosman bay was once known as Sirius Bay