John Galt Smith was born in 1794. He arrived in Van Diemen's Land on the Britomart on 4th February 1822. Other passengers on the Britomart included Robert and Helenus Scott. The voyage was a pleasant one and in March 1822 John Galt Smith and Robert and Helenus Scott publicly thanked Captain Peache, the master of the Britomart for their accommodation on the vessel and to state that their voyage was made more comfortable and agreeable by Captain Peache's attentive and gentleman like conduct.

John Galt Smith applied for a land grant in 1822 and was granted 1000 acres which he selected on the Paterson River. He also purchased 700 acres in 1824 and 600 acres in 1825. This land together with another two grants, one of which was granted to his wife Eliza Walsh was situated on the eastern bank of the Paterson River adjoining Alexander Livingstone's 'Bowthorne' and Walter Scott's 'Wallalong'. He named the estate Woodville.

John Galt Smith resided in the Windsor area for some time. He married Eliza Walsh at St. Luke's Church Liverpool. Eliza was a settler at Kurrajong and had arrived in the Colony on the Globe in 1819 accompanied by her brother-in-law Frederick Drennan a former Deputy Commissary General of NSW.

In January 1824 John Galt Smith was given permission to travel from Windsor to No. 22 Township, County of Durham and again in June 1824 with his servants and cattle to his farm in Co. of Durham.

In 1828 Timothy Buckley was employed as overseer at Woodville. Buckley was a 25 year old ticket of leave holder from Cork who arrived on the ship Isabella in 1823. He had first been assigned to Smith at Windsor in January 1824 and so probably accompanied that first trip overland to Woodville with cattle later that year.

William Chipperfield who arrived on the Norfolk in 1825

Thomas Lander per Marquis of Huntley

John Galt Smith attempted to establish 'The Village of Brisbane' on his estate in 1843 when he advertised for 200,000 bricks to be delivered to his site opposite Lang's steam mill. This was at the height of the financial depression and the village did not go ahead.

John Galt Smith died in tragic circumstances in 1847 aged 53. He had arisen from bed in the early hours of the morning and while lighting a candle in a nearby room his clothes caught fire. His groans alerted a servant girl who came to his assistance and found him still alight. She alerted the household and Smith was put to bed and medical assistance called. His injuries were extensive however, and he died ten hours later.

He was buried in the cemetery of St. Paul's Church, Paterson.


Woodville later passed into the hands of the Croaker Family

4). Reminiscences of Maitland and Paterson districts 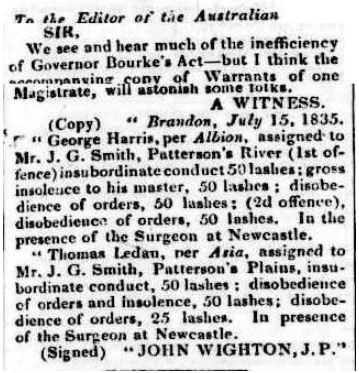