In June 1808 the Aeolus was moored in the Thames River where seventy-nine female prisoners from districts throughout England and Scotland were to be embarked [7]. Most of the women would never return to their homeland and in effect a sentence of 7 years transportation beyond the seas was equal to a sentence of transportation for life.
One lass from Edinburgh was reported in the Hull Packet as belonging to a family of rank in Edinburgh and was being sent for shoplifting.

In the following Memorial of the Sheriffs of Newgate to the Secretary of State which was printed in the Freeman's Journal it is probably the female prisoners of the Aeolus that the Sheriffs refer to.....
'The Sheriffs of London and Middlesex take the liberty, with the utmost deference and submission, to represent for the consideration of Lord Hawkesbury, a point in the execution of the penal laws, with which they are brought into contact in the execution of their office, and which they humbly conceive involves the character of his Majesty's Government for humanity, and tends to bring into discredit the admirable laws and constitution of this realm.

In making an appeal of this sort to his Majesty's Principal Secretary of State, the Sheriffs presume that their motives will be liable to no misconstruction, and that they shall be considered as being animated by the purest loyalty to their Sovereign, and by an unbounded respect and devotion for the laws and constitution. They hope, indeed, that this appeal to Lord Hawkesbury will be received as a pledge of that loyalty and that attachment.

The Sheriffs of London have this day received, through the keeper of Newgate, an order to deliver on board a ship, bound for New South Wales, thirty-nine female convicts, subjected by the law to a transportation beyond the seas for the term of seven years. The same order includes eleven other female convicts, part of whom are under a sentence of the law to be transported for life, and part of them for the term of fourteen years.

The point which the Sheriffs humbly submit to the humane attention of Lord Hawkesbury, relates solely to the thirty nine convicts whose sentence extends to the period of only seven years.

Since the present Sheriffs have filled their high and ostensible situation, it has occurred to them as matter of duty, to enquire relative to the future condition of the convicts sent to Botany Bay, and particularly of the females. As one of the results of this enquiry, they have been surprised to find, that although these unfortunate persons are transported at the expense of government to the other side of the globe, no provision has ever been made to restore them again to their country, after the expiration of the sentence of the law; so that, in fact, every term of banishment for every shade of crime, becomes virtually uniform punishment of exile for life.

Lord Hawkesbury is too well acquainted with the principles of municipal law, and with the obligations of moral truth, for it to be necessary for the Sheriffs to quote in this place all the axioms of law and morals which oppose themselves to a practice so oppressive, and so contrary to the mild tenor and equitable spirit of the laws of England. It will immediately occur to his Lordship, that exemption from greater punishment than has been inflicted by law, is as much the right of every British subject, as exemption from all punishment is the right of those who have committed no crime. In the present case, the limited punishment prescribed by law, is rendered interminable by an act of the British Government, which controls the fate of these individuals to the end of their lives, as much as though it continued a series of uninterrupted coercion over them. It is well known to his Majesty's Government, that the transportation of every one of these convicts costs upwards of 100 pounds when undertaken by the contract of an entire ship; it will, therefore, be readily conceived, that a passage is not to be purchased by an individual from Botany Bay to England for a sum short of 150 pounds an expense far exceeding the means of one in a thousand of the convicts who are transported to Botany Bay.

Lord Hawkesbury will please to observe, that the Sheriffs confine this statement principally to the condition of female convicts, many of the men, as is well known, being able to work their passage to Europe or America, in some of the ships which touch at New South Wales. The women it may be readily conceived are doomed by such a distant transportation, to pass the remainder of their days in that remote region frequently for first and very slight offences, committed in the thoughtlessness of youth, or in an extremity of distress, severed forever from their husbands, their children, their parents, and their native country.

The Sheriffs are aware of some difficulties which may present themselves to the Executive Government, in attempting to ameliorate the fate of such persons; but they earnestly hope, that so important a principle will not continue to be compromised on account of some slight difficulties or possible inconveniences, that may result from the preservation of the faith of the public towards these unhappy people. Perhaps a full consideration of the subject may lead the government to charter some of the ships which convey convicts out to Botany Bay, to bring back those who have suffered the term of their banishment, and who may choose to return; or, perhaps it may lead his Majesty's Government to consider of some means of which the great expense of transportation to Botany Bay, for the term of seven years, may be saved to the public, and some plan of penitentiary or correctional punishment be substituted at home in its place, for that class of minor offences which at present are subjected by the law to a limited term of transportation. The Sheriffs, however, submit the remedy which may be necessary to remove this opprobrium on the administration of the law to the wisdom of his Majesty's Government.

In regard to the 39 seven years transports now under orders of removal, the Sheriffs can scarcely hope that any decision of government can be made in time to afford these persons relief, notwithstanding several of them have already suffered nearly two years imprisonment in Newgate: - many are for first offences (one of them being but fourteen years of age, and another but sixteen) attended by no circumstances indicative of radical or habitual depravity; and others unite to this last recommendation, that of having families of young children, husbands, and other relatives, the conscious separation from whom, for the remainder of life, involves more acute suffering and more complicated misery, than would the punishment of death itself. ' [1]

Mary Post, wife of Dyson Post who was on board the Admiral Gambier came as a free passenger

The Aeolus was reported being in the river waiting to embark her 'fair settlers for Botany Bay' in June 1808. She left England in convoy on the 2nd of July with the Admiral Gambier and the Juno whaler and a West India fleet under convoy of His Majesty's ship Polyphemus, of 64 guns, two Portuguese frigates, and three gun brigs.

At Madeira the Aeolus together with the Admiral Gambier and Juno parted company with the convoy.

The Admiral Gambier sailed into Rio de Janeiro on 8th September and departed there with the Juno on 6th October leaving the Aeolus at Rio. Captain Lewis gave the following particulars of their stay at Rio...The Aeolus left the harbour of Rio de Janeiro on the 6th of November, two days previous to which the regular Packet from England, via Madeira, had arrived; and immediately after the telegraphic signals hoisted on board the Foudroyant flag ship of Admiral Sir W. Sidney Smith, Commander in Chief of His Britannic Majesty's Forces in that quarter, announced the following glorious news: Two Victories gained in Portugal; Lisbon evacuated by the French; The Russian Fleet conveyed to England until a general Peace. A general salute was fired from all the ships and batteries and a brilliant illumination took place for two nights.[3] 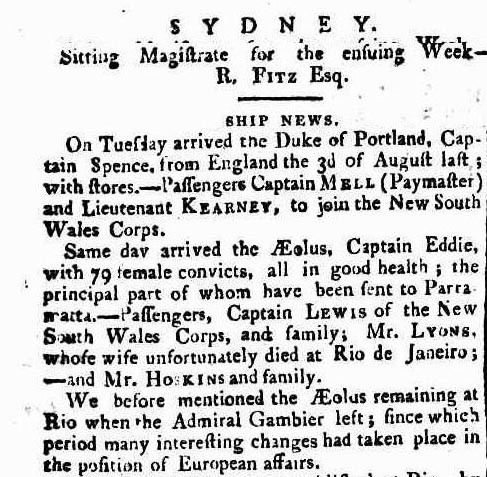 The Aeolus arrived on 26 January 1809 exactly twelve months to the day after Governor Bligh was arrested and removed from Office. When the Aeolus arrived William Paterson had just replaced Joseph Foveaux as administrator of the Colony.

The Female Factory at Parramatta was soon to be re-established under the supervision of Benjamin Barrow, however the fate of some of the women of the Aeolus can be assumed from an extract from the correspondence of T. W. Plummer to Colonel Macquarie (who did not take over as Governor until January 1810). The correspondence was written in England on the 4th May 1809..........

I beg to submit to your consideration the following remarks:... There is another cause to which the laxity and depravity of public morals is peculiarly imputable.

It will perhaps scarcely be believed that, on the arrival of a female convict ship, the custom has been to suffer the inhabitants of the colony each to select one at his pleasure, not only as servants but as avowed objects of intercourse, which is without even the plea of the slightest previous attachment as an excuse, rendering the whole colony little better than an extensive brothel, and exposing the offspring of these disgraceful connexions to the risk of an example at once infamous and contagious. So prevalent has this practice been that it is estimated there are actually at this time about one thousand illegitimate children in the colony of this description.[4]

Ann Smith was more fortunate than some of the prisoners. In correspondence from Lieutenant Lewis to authorities dated 15th February 1810, her circumstances were revealed....This unfortunate young woman, who now desirous of her Pardon according to General Orders, came over with us in the ship Eolus for a very trifling offence and in consequence of her good conduct (I) brought her on shore as nursery maid. She has behaved with the utmost propriety while in my service and on account of her attendance on my young family request Mr. Campbell will have the goodness to represent to His Excellency the Governor in granting her Pardon. Will essentially serve me in the voyage to England.... Ann Smith received a Pardon dated 10 April 1810. (Captain Francis Lewis of the 102nd Regt., announced his intention to leave the colony on the Dromedary in May 1810) [5]

The Aeolus departed Port Jackson bound for England on 1st April 1809. Cornelius Hennings, Francis Stafford and Joseph Taylor all advertised their intention to depart on her. She called at the Derwent on her voyage home and left there for England with a full freight of oil that had been procured by the Dubuc. [6]


Prisoners of the Aeolus identified in the Hunter Valley region

1). Elizabeth Nailor was assigned to post-master Isaac Nichols. She petitioned for an absolute pardon in 1810
2). Elizabeth Wynn arrived as a prisoner on the Aeolus. Later she was employed as assistant to the matron at the orphan school (CSI Fiche 3168; 4/1847 p.245)