This was a different vessel to the Experiment 1804 and according to Charles Bateson was the smallest vessel ever employed in the convict service at only 146 tons. She carried a crew of only 12 men and mounted eight guns. Charles Bateson noted that the Experiment belonged to Peter Evet Mestaers, a Dutchman and prominent London shipowner. [5]

Some of the prisoners of the Experiment may have been held in Newgate prison, Dublin prior to being embarked.

Below is an extract from A History of the City of Dublin: From the Earliest Accounts By John Warburton giving a history of Newgate and a description as it was in 1808........

The old gaol in Corn-market, called Newgate, from its having formerly been one of the city gates, being small, inconvenient, and from its ruinous state, insecure, it was determined to erect a new prison, in which should be united permanence and security, with such an arrangement as would at once prevent the communication of contagious diseases, and contribute to the convenience and comfort of its unhappy inmates, as far as their circumstances would allow.

In pursuance of this determination, on the 28th of October 1773, the foundation-stone of the present building, to which has been absurdly given the old appellation of Newgate, was laid in the Little Green, a piece of ground in the north part of the city, which was chosen, but we are sorry to add, very injudiciously, for its site, as it was not only insufficient in extent to admit of sufficient yards and other necessary accommodations for the different descriptions of prisoners usually confined in gaols, but environed by dirty streets, and in so low a situation as to render the construction of proper sewers to carry off its filth impracticable.

The expense of this prison, amounting to about 16,000 pounds was defrayed by a tax on the inhabitants of the city of Dublin, aided by a parliamentary grant of 2000 pounds; and though built on a plan drawn by a reputed able architect, the late Mr. Cooley, and under his immediate direction, yet, from its insufficient extent, bad arrangement, and wretched execution, the materials and workmanship being of the worst description, it is a disgrace to the metropolis. In consequence of its being circumscribed on three sides by streets, and on the fourth by the Sessions-house, which absurdly joins it, and prevents all ventilation on that quarter, its limits cannot be enlarged, and from the walls being composed generally of small stones and bad mortar without bond, it is deficient in the essential points of permanence and security, which, it is to be lamented, can be attained only by rebuilding it from the foundation.

It is a quadrangular pile of three stories, 170 feet in front and 127 in depth. The principal front, which is to the east, forming one side of Greenstreet, consists of a centre break of mountain granite rusticated and crowned with a pediment: on each side is a plain facade of black limestone, and at the external angles are four round towers, through which the filth of the gaol was intended to be conveyed, and which were of course to contain the necessaries: these, however, are not at present appropriated to this purpose.

It is the prison for criminals of all descriptions for the county of the city of Dublin, and for persons confined under coroners' writs, and is also occasionally the receptacle for transports from many of the inland gaols of Ireland, who are sent hither previous to their being sent on shipboard; on which occasions it is often extremely crowded. In the front are the guard-room, gaoler's apartments, hospital, common hall, long room, chapel, etc. and in the other sides of the quadrangle are the cells, which are universally 12 feet by 8, injudiciously disposed, badly ventilated, those in the upper stories accessible by narrow staircases, and all opening off corridors only three feet four inches wide.

The interior area, totally insufficient to admit of proper and separate courts for the sundry classes of prisoners, is divided into two nearly equal parts by a passage for persons who visit the prisoners, with whom they can converse through grated apertures in the walls on either side. The part on the south, 61 feet by 56', and of which the centre was in 1808 occupied by an offensive necessary without a sewer, formed a court-yard for all the male prisoners under criminal charges of every description, who were crowded together from the number of 8 to 13 persons in the same cell: off this opened their only common hall, 20 feet by 17, and here consequently the tried and the untried, those charged with felonies, and with petty offences, and even persons under sentence of death, were all indiscriminately mingled, without any attempt at classification.

The northern part of the area is divided into two yards, one 54 feet by 43, off which are the cells for prisoners of a better description; the other only 54 feet by 17, for females, where there was, in 1808, the same mixture of prisoners as in the male side; the untried and the convicted promiscuously herded together, and in general from 10 to 14 women of all descriptions in a cell 12 ft by 8.

The hospital, 20 feet by 17, was injudiciously situated, ill contrived, ill ventilated, and destitute of hot and cold baths. The chapel, situated in an upper story, was accessible with difficulty by narrow winding stairs; and there was no room set apart for the chaplain, in which he could hold private communication with a prisoner under any circumstances. Such are the principal features of the state of this gaol in 1808, as represented by the commissioners, who so ably and faithfully discharged the trust reposed in them by Government.

The Experiment sailed from the Downs to embark convicts in Ireland on 29th October 1808.

The Freeman's Journal reported on 10th November 1808 - 'Two vessels laden with convicts under sentence of transportation, and destined for Botany Bay, now remain in the great dock of the Grand Canal Company near Ringsend (Dublin); one is a sloop cutter-rigged in which the females are deposited, the other a brig-rigged vessel, in which the male convicts are to be embarked (the Boyd); several persons have been, and are further expected to be transmitted from different parts of the country to add to this precious exportation....On Tuesday between 40 and 50 male convicts, and upwards of 20 female convicts were conveyed from Newgate in a number of jingles, jaunting cars and carts which were prepared for the occasion, to the great dock of the Grand Canal, where they were embarked in the vessels now moored there, in which they are to be transportation to Botany Bay.

Beef and pork for the use of convicts in the colony were shipped on both the Experiment and the Boyd.[4] According to the Historical Records of Australia the Experiment also carried 1500 bags of wheat, 5 chests of tea, 2 tubs of sugar candy, 6 bales of piece goods and 4 casks of rum. [1]

The Experiment departed Ireland from Cork on the 21st January 1809 in convoy and arrived at Rio de Janeiro on 9th March 1809 remaining there nine days.

The Experiment was the next female convict ship to arrive in Sydney after the arrival of Aeolus in January 1809. The Experiment arrived in Sydney Cove on 25th June 1809 with 60 female prisoners. All the women were landed in good health.

After the turmoil of the previous few years, the colony was in transition when the Experiment arrived. Colonel William Paterson was Administrator after the departure of William Bligh. Colonel Lachlan Macquarie had been appointed Governor in April 1809 but had yet to arrive.

By the time the Experiment arrived in Sydney the Factory at Parramatta had been re-established under Benjamin Barrow and some of the women may have been taken there, however it is possible that they were disposed of in the same manner as those of the Aeolus five months previously.

Governor Macquarie had received orders from Viscount Castlereagh to address the system of assignment of female convicts on 14th May 1809 before departure, however Macquarie didn't arrive in the colony until December 1809:

It has been represented to me that upon the arrival of a ship with female convicts in NSW the unfortunate females have been given into the possession of such of the inhabitants, free settlers, and convicts, indiscriminately, as made a demand for them from the Governor. If a practice so extraordinary and disgraceful has not been abolished, you will be no means suffer it to continue, and I am to desire you will take the proper means for having the female convicts upon their arrival, kept separate till they can be properly distributed in such a manner as may best encourage attention to industry and character....The female convict, it is stated, is seldom apprenticed, and she lived indiscriminately, first in one family, then in another. [2]

The Experiment departed Sydney bound for Bengal on 11 July 1809 with between 70 and 80 tons of sandal wood. The return of the Experiment with a supply of necessary items for the Colony was expected in about seven months. Those intending to depart on her included Thomas Mills, James White, William Fielding and Charles Sutherland.

She arrived back in the colony to the great relief of Governor Macquarie who informed Viscount Castlereagh in correspondence dated 8th March 1810...There being no certain prospect of relief from any quarter, to supply the present wants of the colony, I immediately ordered 300 acres of the Government farm to be prepared for a crop of early potatoes and wheat, intending to put the troops and all other persons victualled by the Crown upon a reduced ration; but fortunately on the very day that I had fixed for resorting to this very unpleasant expedient, the ship Marian, and in a few days after her the brig Experiment, arrived to our relief with contract wheat from Bengal. [3]

1). Julia Leahy was sentenced to 7 years transportation for stealing one bolster, two pillows and a pair of blankets from John Hughes in Dublin (Freeman's Journal 11 August 1808)

2). Early in 1809 artist John Eyre painted scenes of the west side and the east side of Sydney providing a glimpse of the harbour as it may have appeared to these women over two hundred years ago. 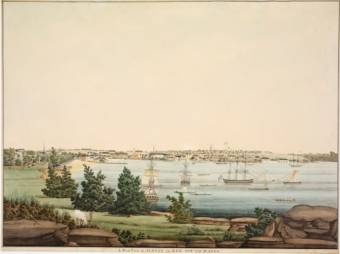 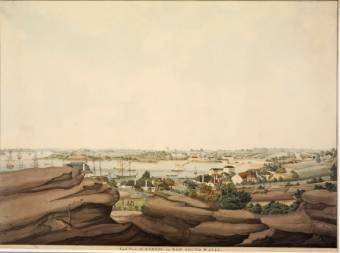 
3). A description of a jingle in Ireland Sixty Years Ago written in 1851...... The next improvement was the 'jingle,' a machine rolling on four wheels, but so put together that the rattling of the work was heard like the bells of a waggon team. This was finally succeeded by the jaunting-car, which still holds its place, and was, Hibernice, termed a 'vis-a-vis,' because the company sit back to back.


5). Convicts and passengers of the Experiment identified in the Hunter Valley