Campbell France was appointed Assistant-Surgeon in the Royal Navy on 9 November 1812.

Many years before this the Leviathan had taken part in the Battle of Trafalgar, however by the time Campbell France was appointed to her she was already twenty four years old and was close to the end of her days. In 1814 the Leviathan had just returned from the West Indies where 150 of the crew had been affected with fever.[1] She was quarantined on arrival in England and it was after this that Campbell France was appointed to her. [2]

The Lancaster Gazette reported in October 1814 that Mr. George Canning, Ambassador to the Court at Lisbon, was to take his departure from Portsmouth for Lisbon in the Leviathan. [3] On 4 November Mr. and Mrs .Canning, with four children and suite, arrived at the Crown and Clarence Hotel in six carriages with four horses each where they intended waiting until the Leviathan was ready to embark.[4] The Leviathan, Captain Bligh, departed on the 8th November however was brought up by contrary winds in Portland Roads. Her Royal Highness, Princess Charlotte was enjoying a pleasure excursion on the Zephyr nearby and paid a visit to the Cannings on the Leviathan. Her Royal Highness was said to have been received on board with the most distinguished marks of attention and every humour due to Royalty [5]. The ship's officers were all introduced to her.

The story of Princess Charlotte's visit to the Leviathan was repeated in the newspapers for months afterwards. 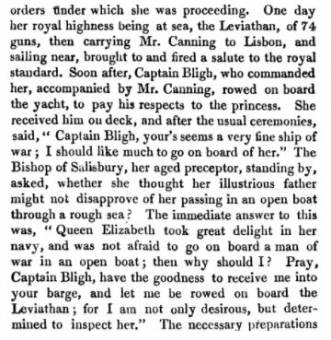 
The Leviathan put into Plymouth on the 11th November because of contrary winds and left there on 20th November 1814, bound for Lisbon. Mr. Canning disembarked from the Leviathan in Lisbon on 4th December 1814.

In November 1815, the Leviathan was to convey her Royal Highness Princess Caroline, wife of King George IV from Genoa to Sicily. Details of the voyage were reported in Parliament when the Pains and Penalties Bill was introduced to the British Parliament in 1820 at the request of King George IV. The Bill aimed to dissolve his marriage to Caroline of Brunswick, and deprive her of the title of Queen of the United Kingdom. Captain Thomas Briggs gave evidence before parliament. [7]

The Leviathan was to remain in the Mediterranean in the winter of 1815[8]. It is not known whether Campbell France and Patrick Hill were still on the Leviathan when this most famous incident occurred, however Patrick Hill departed Sheerness as surgeon superintendent on the convict ship Atlas bound for New South Wales in January 1816.

Campbell France's next appointment has not been traced. The Leviathan was fitted as a convict ship (Hulk) at Portsmouth c. 1816. See Warships in the Age of Sail for more information about the Leviathan

Campbell France was appointed Assistant-Surgeon to the Liffey, Captain Duncan, in 1818.

He was appointed surgeon to the Grasshopper in January 1824[10]. The Grasshopper. Capt. Aplin, had just recently returned from Newfoundland[11]. She departed in February however returned after being damaged in gales in March. In April she was to accompany a convoy to Gibraltar and return.[12]. On 5th June 1824 it was announced that the Grasshopper had departed for the Newfoundland station.


Campbell France and Patrick Hill were young men possibly about 18 or 19 when they were appointed Assistant-Surgeons to the Leviathan in 1814. Their friendship lasted many years. The State Library of NSW holds correspondence written by Patrick Hill to Campbell France in March 1833 when Campbell France was employed as surgeon on the steam vessel Rhadamanthus in the West Indies. Hill’s letter concludes with general notes on the colony:

'The Governor Sir Richard Bourke is I believe pretty well liked in the Colony. He has had another severe fall from his horse which has confined him for several weeks' and that there has been 'little or no bushranging for the last few months.'

The letter was sent to London, and apparently carried privately as there are no New South Wales stamps: the letter, after travelling all the way to Falmouth, finally reached Campbell France on board HM Steam Vessel Rhadamanthus in the West Indies

On the return to England in 1835, the Rhadamanthus left Port Royal on the 11th February and Bermuda on 4th March 1835. She experienced ten days of very severe weather on her passage from the West Indies back to England, reaching there on 6th April 1835.[13]

Campbell France gave evidence in a case of salvage claimed by the Rhadamanthus. [14]

Campbell France's next appointment was Surgeon Superintendent to the convict ship Mary Ann in 1835. The Mary Ann departed Sheerness 9th July 1835 and arrived in Port Jackson 26th October 1835. He departed in March 1836 for England on the Aurija arriving in July 1836.

He was appointed Surgeon Superintendent to the convict ship John Barry in 1839. The John Barry departed Sheerness on 17 November 1838 and arrived in Port Jackson 22 March 1839. Campbell France returned to England on the Andromache in July 1839. Surgeon Harry Goldney also returned on this vessel.

In November 1840 he was caring for passengers of the vessel Champion who were held in quarantine in Sydney because of fever.

He returned to London on the barque Lord Eldon on 14th January 1841. Also returning to England on this vessel was Elizabeth Sophie, the widow of Colonel Henry Dumaresq.

ISABELLA 1842 - Campbell France was employed as Surgeon on the convict ship Isabella to Van Diemen's Land in 1842. The Isabella departed Portsmouth 19 January 1842 and arrived in Van Diemen's Land 19 May 1842. He departed from Sydney in August 1842 bound for England on the Honduras.

He was on the List of Surgeons fit for service in 1843.

Campbell France died at Inverness in 1845. He left his estate to his brothers Alexander and David France and sisters Alison Robertson* and Cornelia McTavish*. Executors of the Will were Patrick Hill, James Bowman and John Dobie[15]

*difficult to read - may not be correct first names

2). In the 1841 Census which was taken on the evening of 6th June 1841, Campbell France, resided at St. Mary le Strand with surgeon Robert Newham (age 25). Campbell France gave his age as 40, occupation 'Doctor' and birthplace Scotland. (*This may not be him as he would have been older than 40 years)

[7] Report of the Proceedings of the House of Lords