IN AUGUST 1786 the decision to fix upon Botany Bay as a place to send felons was announced at Whitehall. A short time later an anonymous wit penned A New Song, a broadside which was published in The County Magazine in November 1786.

Irreverent, timely and a little ribald, A New Song was to become one of Australia's most enduring folk songs.


Lord Sydney to The Lords Commissioners of the Treasury
Whitehall, 18th August 1786.
My Lords,

The several gaols and places for the confinement of felons in this kingdom being in so crowded a state that the greatest danger is to be apprehended, not only from their escape, but from infectious distempers, which may hourly be expected to break out amongst them, his Majesty, desirous of preventing by every possible means the ill consequences which might happen from either of these causes, has been pleased to signify to me his royal commands that measures should immediately be pursued for sending out of this kingdom such of the convicts as are under sentence or order of transportation.

The Nautilus sloop, which, upon the recommendation of a committee of the House of Commons, had been sent to explore the southern coast of Africa, in order to find out an eligible situation for the reception of the said convicts, where from their industry they might soon be likely to obtain means of subsistence, having lately returned, and it appearing by the report of her officers that the several parts of the coast which they examined between the latitudes 15 50 south and the latitude of 33 00 are sandy and barren, and from other causes unfit for a settlement of that description, his Majesty has thought it advisable to fix upon Botany Bay, situated on the coast of New South Wales, in the latitude of about 33 degrees south, which according to the accounts given by the late Captain Cook as well as the representations of persons who accompanied him during his last voyage, and who have been consulted upon the subject, is looked upon as a place likely to answer the above purposes. [1]


Departure of the Fleet

The First Fleet departed England for Botany Bay in May 1787 and consisted of two Royal Navy escort ships, HMS Sirius and HMS Supply accompanied by six convict transports, the Alexander, Charlotte, Friendship, Lady Penrhyn, Prince of Wales and the Scarborough, and three store ships, the Borrowdale, Fishburn and Golden Grove. The Fleet arrived in Botany Bay between 18th and 20th January 1788.

LET us drink a good health to our schemers above,
Who at length have contriv'd from this land to remove
Thieves, robbers, and villains, and send them away
To become a new people at Botany Bay.

Such men as have talents, and trades to get bread,
Yet sponge on the public to be cloathed and fed;
Who spend all they get, and turn night into day,
Such sots should be all sent to Botany Bay*

When gay powder'd coxcombs and proud dressy fops,
With very small fortunes set up in great shops;
If they run into debt - with design not to pay,
They should all be transported to Botany Bay.

The bankrupt who gets his certificate sign'd,
And once more to take in his friends is inclin'd;
All such depredators our ships should convey,
With other less villains, to Botany Bay.

The tradesmen who play at cards, billiards, and dice,
Must pay for their goods an extravagant price;
No, faith, I'm mistaken, - such rogues never pay,
And therefore should all go to Botany Bay.

If at an election an agent is found
Corrupting the voters, or handing bribes round;
Such dabblers in dirty work, send them away,
With those that employ them, to Botany Bay.

When men that are married to good natured wives
Run after lewd wenches, and lead debauch'd lives
Our wise legislature should send such away
To support their new system at Botany Bay.

The night-walking strumpets that swarm in each street,
Proclaiming their calling to each man they meet,
Are become such a pest, that without more delay,
Those despoilers of youth should be sent to the Bay,

If any proud parson his flock should neglect,
And more than his bible the tythe laws inspect
Or if he's too lazy to preach or to pray,
Such a drone should be sent out to Botany Bay.

When clerical coxcombs affect the bon ton,
Keep hunters, grooms, footmen, girls, dogs, and a gun;
Much more than their income they squander away
And are very fit objects for Botany Bay.

If monopolizers will add to their store,
By cruel oppression, and squeezing the poor;
Or jobbers or farmers grow rich in that way,
Such foes to the public should go to the Bay.

If great men above, or our gentry below,
Who talk much of honour, and make a great show,
If they the poor tradesmen don't annually pay,
Send off such defaulters to Botany Bay.

When lecherous whoremasters practise vile arts,
To ruin young virgins, and break parents hearts
Or from the fond hufbar.d the wife leads astray,
Let such debauch'd stallions be sent to the Bay.

When rakes are promoted they ought to be watched,
For some will pass sentence on girls they've debauch'd
If men break the peace - who to keep peace but pay
Send off such transgressors to Botany Bay.

Then whores, pimps, and bastards, a large costly crew,
Maintain'd by the sweat of the labouring few,
Should have no commissions, place, pension, or pay,
Such locusts should all go to Botany Bay.

And that our foul nation may cleanly be swept,
Send of all the keepers as well as the kept;
Who beggars his children his bunter to pay,
Should work for a breakfast at Botany Bay.

The hulks and the jails have some thousand, in store,
But out of the gaols are ten thousand times more
Who live by fraud, cheating, vile tricks, and foul play,
And should all be sent over to Botany Bay.

Should any take umbrage at what I have writ,
And here find a bonnet, or cap that will fit;
To such I have only this one word to say, -
They're welcome to wear it to Botany Bay.

Published in The Country Magazine November 1786 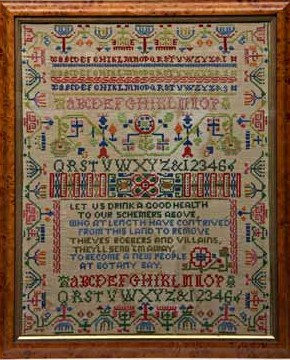 The Following verse was also titled 'A New Song'

It was said to have been written during the American War of Independence 1775 - 1783
Senilities; or, Solitary amusements: in prose and verse; etc By Richard Graves, 1801

Come all ye young virgins, so frolic and fair,
Who the market have tried - and of husbands despair;
Bid adieu! to old England, and trip it away,
And join the bold convicts at Botany-Bay.

Among five hundred felons, a man you may chuse,
Who like you too has no reputation to lose;
Then solace each other by night and by day,
No scandal can hurt you at Botany-Bay.

Tho' a thief or a robber, in that commonweal,
Live honest he must - where there's nothing to steal;
And where halters are plenty; for Botanists say,
The finest of hemp grows at Botany-Bay.
At Botany-Bay, etc. How happy you';ll live in your peregrination,
Where you've nothing to do but attend procreation;
The more children you get, the better you'll pay
Your debt to old England at Botany-Bay.

From such worthy parents each worthy descendant
May hereafter grow rich - and become independent,
Then laugh at old England, who sent you away, ;
And so happily plac'd you at Botany-Bay,
At Botany-Bay, etc,

Our American friends, by Frenchmen deceiv'd,
From fancied oppression may think they're reliev'd;
Tho' for England's mild laws they'll have despotic sway,
But we hope better things from Botany-Bay.