James and Nancy McClymont arrived on the Andromeda in 1823.

James McClymont applied for and was granted an allotment of land in Newcastle in November 1824. This was allotment 136 in Hunter street near Perkins Street.[1] This is very close to the site of William Rouse's hotel which became known as the Newcastle Inn in the 1840's.

As well as allotment 136, James McClymont was also granted land on the Hunter River. Select here to find the location of his estate.

James and Nancy McClymont became innkeepers at the Ship Inn at the foot of Watt Street, Newcastle. In the 1828 census they had three children residing with them at Newcastle - John age 4, Sarah age 1 and William age 2 months. 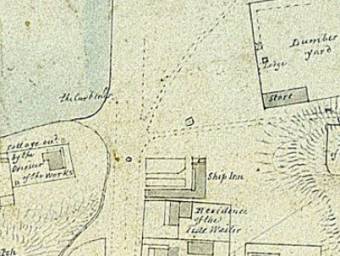 Location of the Ship Inn in Watt Street on John Armstrong's Map of Newcastle c. 1831.


Ann Vane and James Harkins, Patrick Burns were assigned as servants in 1828/29. Charlotte Smith who arrived free was employed as a servant.

Select here to find other Innkeepers at Newcastle around this time.

When James McClymont died in 1829, John Hillier took over as innkeeper.[2] Sir Edward Parry, on a visit to Newcastle to examine Australian Agricultural Company holdings, stabled his horses at John Hillier's Ship Inn in 1830; he described it as a small clean Inn situated near the wharf. There were 3 parlours; 5 bedrooms; 1 kitchen; 1 store room; 4 stall stable and a coach house. John Hillier later moved to Morpeth where he became a store keeper.

In the 1832 Directory it is stated that James Pawsey kept the inn known as The Ship Inn, although in 1831 and 1832 he was issued a publican's license for The Australian Inn. James Pawsey had previously been employed as Landing Waiter at Newcastle. The residence of the Tide Waiter can be seen on the map above next door to the Ship Inn.

The Ship Inn was situated on or close to the site of the future Great Northern Hotel. 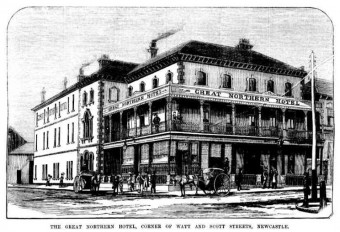 
James Hannell had taken over the licence for the Ship Inn by 1841.

In 1842 the location was changed to a new building; a publican's license was issued to James Hannell under the sign of the Ship Inn in Perkins Street, Newcastle.[3]

In the years 1844 - 1854 the license was issued to James Hannell for the Ship Inn situated on the corner of Hunter and Bolton Streets.[4]

In 1844 the Ship Inn was the venue chosen when some of the town's folk held a public meeting to decide on the proper means to express gratitude to Rev. Dr. Lang for his services to the colony and to devise measures to assist in retaining him in the Legislative Council. Those at the meeting included Martin Richardson, William Rouse, J. Way, W. Watson, James McGreavy, George Tully, Job Hudson, and James Hannell.[5] 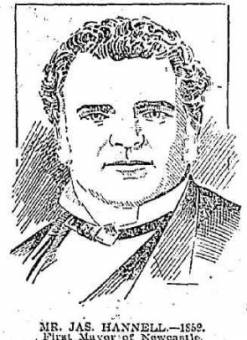 In December 1846 the Maitland Mercury reported that the license of the Ship Inn had been transferred to the site of the Union Inn.........we are glad to find Mr. Hannell has removed to a more extensive establishment, as we feel assured that his general urbanity, and his constant attention to the comforts of his customers, will always secure him an ample share of public patronage. [6]

James Hannell was issued with a publican's license for the Ship Inn on the corner of Hunter and Bolton in 1856 [7].

Many years later James Hannell and the Ship Inn were still remembered......Under James Hannell's regime the 'Ship Inn' became the leading hostelry in the town - it was here that the principal social and political events were held; the Oddfellows' Lodge had their Lodge room here; and all local sporting events were arranged and finalised in the Long Room. Many of the older residents of Newcastle will remember the old Inn - it had a frontage of 58 feet to Hunter street, and about 90 feet to Bolton street. It was a substantially-built brick building of two stories, and in its later years contained 23 rooms, together with a billiard room and a brick building at the rear. [8]