My father John Savage first visited Norah Head as a young boy in the 1930's.

Neighbour Fred Pellow owned a piggery at Highfields near Newcastle and he kindly offered to show my father's family his favourite fishing spot. The entire family of six bundled into Mr. Pellow's pig truck - it took hours to make the journey from Highfields to Norah Head that day but it must have been worth it because the family returned - again and again.

After that first trip, my grandfather took his own Model T Ford and the journey from Newcastle was always an adventure. As they came close to the coast near Budgewoi, the roads were just sandy tracks. Along the flat there were three tracks and they simply chose the one that looked the best on the day although it made little difference as they nearly always got bogged in the sand. 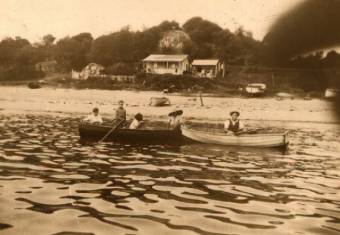 
When they arrived at Norah they set up camp. There were others who camped there as well or stayed in rough little huts and houses. Some near the site of the present rockpool and others further along near Cabbage Tree Bay. There was a spring just above the (future) rockpool and there was a creek/spring near the area where the Norah Head Search and Rescue Boat Club now stands so there was a plentiful supply of water. They used to cart the water from the spring in old kerosene tins salvaged from the Lighthouse. This hillside was once covered in Cabbage Tree Palms.

For my father and his sisters it was a holiday and a welcome break from school, although my father did attend school at Noraville on one occasion. He vividly remembered the day when the teacher Miss Ada Hargraves dealt calmly with a large snake that had entered the school room.

Mostly, my father was free to roam wherever he liked. With no thoughts of danger, on land at least, or fatigue, he walked for miles over sandy tracks and hills or rowed his boat (called Do-Us) wherever he pleased. With his dog Tim and best friend Santo Rosetti, he spent his days setting lobster pots, fishing, and catching rabbits - enjoying a childhood that was truly part of another era.

While they were free to go wherever they liked, they never swam in Cabbage Tree Bay. 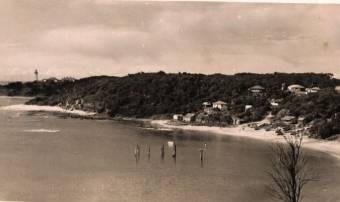 In the 1930's, it was dangerous to swim in the Bay because of the large number of sharks that followed the fishing boats in; my father recalled leaning over the side of their boat to see the head of a shark at the front of their boat and the tail at the other. Before the present day Rockpool was constructed a natural pool on the reef near the Lighthouse was the only safe place to swim, and was used by children and adults alike.

In the 1930's some of the men decided to build a Rockpool out of the reef. This was in front of land that was used as a Rifle range club house during World War 1. The Rifle Club House was still there at that time and occupied by Larry Lambert. It was pulled down in 1959. Work first began on the Rockpool in 1932/33 when Frank Garnett and Mr. Twaddell from Parramatta brought some of their fishing friends who were shot firers.

They were joined by local people and others including Edward Savage and Billy Lee. When the pool was completed, Frank Garnett carved into the sandstone rock on the southern side of the pool the words Ye Olde Swimmin' Hole and Santo Rosetti added his name also. 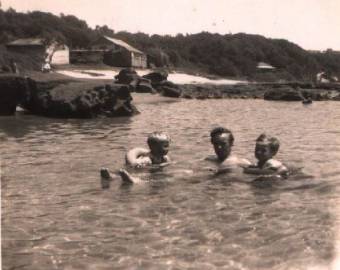 The Rockpool was much smaller than it is today. Later it was decided to enlarge the Pool; and it was enlarged again in the 1960s at which time the rocks were pushed further out and along to the west. The first king-tide after the alteration (in 1966 - 67) allowed the water to flow through/over the rock walls and it wasn't long before erosion of the banks up from the beach started.

The houses that had replaced the seaside huts and cottages were under threat. In a measure to save these buildings a sloped cement wall was built in front of the houses. It was designed by a man conversant with similar sea-walls in Holland. The cement wall was well designed and did its job. It has remained in place for over fifty years. One hundred and five bags of cement were used in its construction and some of the men who worked on it included Billy Lee, John Savage, Jim Anthony and Les Masters.

Today the great great grandchildren of Edward Savage who was one of the men who helped to build the first rockpool still enjoy the benefits of these early endeavours.