Montague Parnell was born at Brampford Speke, Devon on 4 March 1817, the son of John Ratcliffe Parnell M.D. His medical training was in France.

He was a pupil of Mr. Guthrie's at the Opthalmic Hospital, Charing Cross, London where from 50 to 200 patients were treated in a week. He had not had one failure in treating disease of the eye. [1]

He arrived in Australia about 1842 and was certified a legally qualified medical practitioner in that year.

In July 1846 he set up practice in West Maitland. .....'Mr. Montague Parnell, Surgeon, may be consulted daily between the hours of 10 and 12 in the forenoon, at Mr. Pinhey's Dispensary, corner of High and Hunter Streets, West Maitland. [2]

Montague Parnell owned 'Poole Farm' 1/4 mile from West Maitland where he established Poole Farm Brewery. He entered a sample of red wine, white wine and vinegar in the Hunter River Agricultural Society show in April 1847. The house at Poole Farm consisted of 6 rooms, detached kitchen and servants room, cellar, malt house and kiln, brew house, hut, stable, well and 3 acres of garden. The farm was 40 acres bounded by Wallis Creek on the south. [4]

In 1851 he sold his household goods and furniture at Poole Farm and moved to Raymond Terrace where he set up a medical practice. He remained at Raymond Terrace for 2 years.

In 1853 he returned to Maitland and gave notice that he was commencing his practice at his residence at the rear of Samuel Derrington's Tin Factory in East Maitland.[5]

Montague Parnell died 12 September 1891 and was survived by two daughters and four sons. 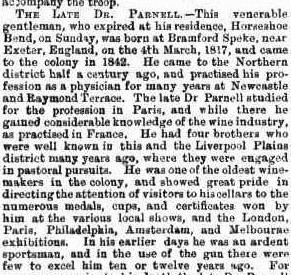 
1). Two of the brothers of Montague Parnell mentioned in the obituary above were James Virgo and Ratcliffe Parnell -

Following is the obituary of James Virgo Parnell who died in May 1870 - Another of the old Hunter residents died on Monday morning. Mr James Virgo Parnell will be remembered by the few now left of the old residents on the Hunter, as one of a party of brothers and friends, the Messrs. Parnell, Reynolds, Carter, and others, natives of Devonshire, who came to the colony about the same time (although not all together) some thirty years ago. Most of them have since taken notable parts in forwarding the progress of the Hunter and adjoining districts, in various ways and most of them also have continued in Australia the love for field and out-door sports they had acquired in England. Mr. J. V. Parnell, for instance, was one of the best shots in England (his friends inform us) at pigeon matches, etc., and he has frequently shown in Australia that his old skill remained unimpaired. Mr. Parnell, and his brother Mr. Ratcliffe Parnell, after a time established themselves as squatters at Wallabadah, on the Quirindi Creek, a mountainous tributary of the Namoi River. In this locality, on the first westerly slopes from the Dividing Range, Messrs. Parnell proved successful squatters, and, extending their enterprises, were enabled ultimately to sell out, and retire on their means.

Mr. Parnell was not a public man, and so far as we have observed, never took much part in any public movements. In private life he was an honourable, genial man, very hospitable, and one of the old school, delighting in making his guests (if old chums) top-heavy. For some years past he has suffered from illness, from time to time, and latterly had resided at Newcastle, partly to be close by medical assistance ; and there he died on Monday, at the age of about fifty-five years. He has left a widow and four children. [6]

2). Ratcliffe Parnell died on 15th December at Exeter, England aged 48 years and the Wallabadah estate was put up for sale - Sale of the Parnell property at Wallabadah in 1869 [7]