Use the Search Box above to find your Hunter Valley Ancestor.
Henry W. Radford was the son of Rev. Thomas Radford, M.A., rector of Ravensfield and Rexborough near Doncastler, England and his wife Elizabeth nee Gunning, daughter of Rev. Dr. Peter Gunning.

He was was appointed assistant surgeon to the 45th regiment on 10 August 1815 [7]. He served in the Peninsula Wars. For bravery in dismounting and fighting the enemy hand-to-hand he was presented by his fellow officers with a handsome silver vase and medal which were still proudly held by his family over a hundred years later.[13]

On being placed on half-pay Henry Radford decided to emigrate to Australia. He arrived on the Greenock on 8th January 1824 with his wife Frances and son Henry as well as four year old Eliza Smith[3].

On 15th January 1824 Henry Radford applied for a grant of 2000 acres. He stated himself to be on half-pay of the 65th regiment

Having been placed upon the Half Pay and feeling desirous to become a settler in this Colony, I take the liberty of addressing you for the purpose of obtaining from Government the Indulgence of a grant of land and I further beg that state that should Government be pleased to assign to me two thousand acres I am prepared to accept of them in conformity to the Regulations. I have the Honor Sir, H.W. Radford, H.P. Surgeon 65th Regiment [1] The grant was confirmed in correspondence dated that same day. [2]

On Wednesday the 24th (August), four bushrangers went to Dr. Henry Radford's house near Lochdon, the farm of James McGillivray's, and met with a reception little expected - the Doctor had notice of their approach, and the moment he observed them, fired, and wounded one man severely - as the waistcoat was found yesterday morning, all covered with blood. One of Dr. Radford's men acted with great courage, and wounded another - this man deserves great credit for supporting his Master, as it seems to be believed that not one prisoner in fifty in this district would have followed his example. The parties fired fourteen shots.[1]

In 1827/1828 the following convicts were assigned to Henry Radford at Hunter River: 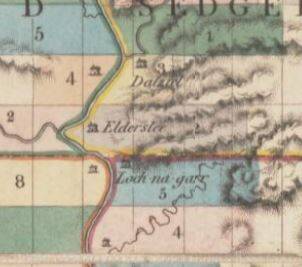 On 29th January 1829 Frances gave birth to a daughter Alicia Maria and in the church records their residence was given as Patrick Plains.[5] At this time they were residing at their estate Elderslie which had originally been a grant to Alexander Shand.

On the 3rd February 1829 Henry Radford announced that he was leaving the colony. In April 1829 Elderlsie was advertised for lease....To new settlers or others requiring a temporary settlement - To be Let till June 1830, a house of four apartments, with a kitchen outside, five acres of cultivation ground, cleared and fenced, use of stock yard, and liberty of grazing 20 head of cattle. The rent is £35 and entry may be had immediately. Apply personally to Mr. William Brooks at Dalziel, Hunter's River, the adjoining land to that on which the house is situated. [12]

In India Henry Radford served with the 62nd Regiment. The 62nd regiment endured appalling conditions in India - Return of the sickness in 62nd Regiment on the march from Bangalore to Masulipatam from 18 February to 15 April 1833.

The family returned to Australia on the Merope in 1834 broken in health and spirit and without their two sons who had drowned the previous year when the Lady Munro was wrecked (read an account here) A son John was born in 1834 and another, Henry Wyatt Radford was born in November 1835. Henry Wyatt Radford (junior) married Lydia Sloane, daughter of David Sloane at Newcastle in 1864.

The following convicts were assigned to Henry Radford at the Hunter River in 1836/37:

DEATH at Newcastle on Friday 15th instant - Dr. Radford arrived in the colony in the year 1824 on furlough from his Regiment in India, having married an English lady at Algoa Bay during his stay at the Cape. He obtained a grant at Hunter River but returned a year or two thereafter to India to complete his period of service. His two sons were on their way from India to the Australian College when they were both drowned in the unfortunate vessel that was lost on Amsterdam Island about 3 years ago (Lady Munro). The melancholy tidings of this calamitous visitation preyed upon Dr. R's sensitive spirit, and the climate of India undermined his robust constitution, so that on coming to the colony, after having at length completed the regular period of service in India, he only came to spend the remainder of his days in sickness and to sink prematurely into the grave. Dr. R. died sincerely regretted by his numerous friends in NSW but we are happy to add he has left his widow and family in comparative independence. - The Colonist 28 January 1836.

At the time of his death Henry Radford had acquired three estates in the Hunter - Elderslie, Radfordslie and Ravenfield. [9] Elderslie was originally a 2000 acre grant to Alexander Shand made in 1823. When he departed the colony in May 1824, Alexander Shand gave his address as Eldersly, Hunter's River. [6]

After Henry Radford's death the land at Hunter River was advertised for auction. A descendant later recalled the handsome tablet to his memory placed in St. Peter's Church Cook's River by a number of his friends.

Henry and Frances Radford's two sons John Robert Biddulph Radford and Henry Wyatt Radford were given sheep and cattle stations in N.S.W. and Queensland by their uncle, Colonel Walter Radford of the Royal Engineers. [13]

[9] Radford v. Duguid and others Sydney Morning Herald 2 August 1860 - An appeal from the decision of the Primary Judge, and the question is whether the children of Henry Wyatt Radford, who have all attained majority are entitled to have the shares indicated for them respectively by their father's will conveyed and assigned to them, the widow assenting.....

[11] Cross, Joseph. Map of the River Hunter, and its branches [cartographic material] : shewing the Lands reserved thereon for Church purposes, the Locations made to Settlers, and the Settlement and part of the Lands of the Australian Agricultural Company at Port Stephens together with the Station of the Mission to the Aborigines belonging to the London Missionary Society on Lake Macquarie, New South Wales 1828. MAP NK 646.