Gilbert Cory inherited land at the Paterson called Vacy which was situated on the western bank of the Paterson and the next property along the river after John Boughton's Tillimby.

In 1876 Gilbert (sen) married Charlotte Elizabeth Hingston in Maitland. They also had a large family, the two eldest daughters being Mary who was born in 1869 and Gertrude in 1871.

Gilbert Cory's eldest son Gilbert, was later to settle in Toowoomba having overlanded to the district in 1858 when he was just 19. He later became the Mayor of Toowoomba (1891). 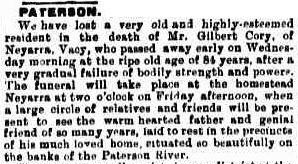 
1). A Visit to Upper Paterson in 1872 - Australian Town and Country Journal