Use the Search Box above to find your Hunter Valley Ancestor.
Date of Seniority Royal Navy 17 April 1818

Ebenezer Johnston was appointed to the position of Assistant Surgeon on 9 November 1812. He was appointed Surgeon to the Mersey in 1818 [3]


Knight of the Tower and Sword

In 1825 having served on HMS Lively, the Knight of the Royal Portuguese Military Order of the Tower and Sword (KTS) was conferred on him 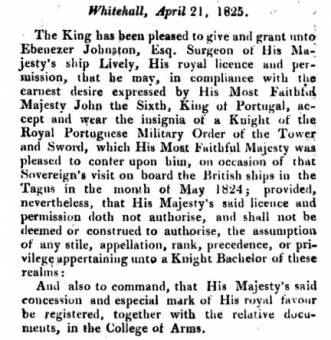 [1] Bulletins and Other State Intelligence