The Nile was built at Newcastle, England in 1799 and was sheathed with copper over the boards [3]. She was registered at London and owned by Francis and Thomas Hurry of Howden Dock, Wall's End Northumberland.[4]

There was a crew of 24 men and the Nile was manned with 10 guns. 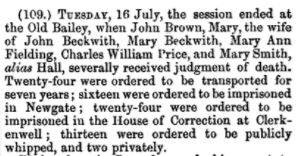 The Nile arrived at Portsmouth on 20th May 1801 and departed Spithead on 21st June 1801 in convoy with the Minorca and Canada. [5]. The Nile sailed via Rio de Janeiro.

The above mentioned Richard Rouse was accompanied by his wife Elizabeth who gave birth to a son John Richard during the voyage. Their daughter Mary Rouse accompanied them also.

In 1818 Mary Rouse accompanied Governor and Mrs. Macquarie on their Visit to Newcastle.

The Surgeons and Masters of the Nile, Minorca and Canada transports were issued with strict guidelines for the health and good order of the ships.... The vessels were to be completely fitted and supplied with every necessary requirement for the purpose of health and comfort for all persons embarked including a comprehensive diet suited to such changes as the constitution might undergo during the voyage and climate; as also with a proper selection of medicines; and to be supplied with the means of cleanliness of their persons - soap, combs, razors, and also those for fumigation, ventilation, scrubbing, cleansing; the perfect purification of and the convenient supply of water, together with every necessary item for the hospital, including changes of bedding, sheeting, hospital clothing, proper diet and drinks for the diseased and convalescent. A diary was also expected to be kept and presented to the Governor on arrival.[1]

Governor King could report in February that the passengers all arrived in good health, and the convicts were the healthiest and best conditioned that ever arrived being all fit for immediate labour. [2]


Prisoners of the Nile identified in the Hunter region

3). Few communities can boast of having seen that almost fabulous personage amongst them commonly known as the oldest inhabitant; but our obituary of today records the death of an old and much respected colonist Richard Rouse, Esq., of Rouse Hill, who had nearly attained the age of eighty years. Mr. Rouse arrived in NSW with his wife and two young children in the ship Nile, in the year 1801; he had, there fore, been a resident in the colony rather more than half a century. There are now but very few of his contemporaries remaining - Freemans Journal..20 May 1852.

4). Find out more about the Nile in the Historical Records of Australia, Series 1, Vol.3

5). Find out more about Mary Beckwith and her daughter at Dictionary of Sydney

The hour of Margaret's departure arrived. The worthy chaplain was the last person whom Margaret saw in the cell of her prison. Her uncle and aunt Leader saw her the day before. The worthy chaplain presented her with the remainder of the judge's present. She had long learned to look upon his sentence in a different light to that in which she had once viewed it ; and now, with feelings greatly subdued, she knelt with the good chaplain, and prayed earnestly that she might never forget the lessons he had given her. She prayed fervently for pardon for all her sins, and that she might for ever leave them behind her, and thence forth lead a new and better life.

Then, turning to Mr. Sharp, she said ' One favour more, sir : your blessing.' ' May God bless you, Margaret,' said the good chaplain, ' and make you, for the remainder of your days, an instrument of good, to His own glory and the benefit of your fellow-creatures ! Amen. Farewell.'

On Wednesday, May 27, Mr. Ripshaw left Ipswich with three female prisoners in his charge, Margaret Catchpole, Elizabeth Killet, and Elizabeth Barker. He took them to Portsmouth, and saw them safe on board the convict-ship, bound for Botany Bay.

Margaret had not left the New Gaol, two hours before the turnkey was summoned to the lodge, and opened the door to a tall, thin man, dressed in the poorest garb, who with a voice soft and gentle, meek and melancholy, requested to see Margaret Catchpole. ' She is just departed with the governor for Ports mouth. Who are you ? '

'I am her brother. My misfortunes are indeed heavy: I am just returned from India. I find my father gone, my brothers gone, and this my only sister, worse than all ! Oh, bitter cup ! gone in dis grace from the country ! '......

THE first news which reached England concerning Margaret was contained in a letter written by herself, by which it appears she had obtained a situation at the Orphan Asylum ; and, as it will best explain her feelings and situation at that time, the reader shall be furnished with a copy of it. The sheet upon which it is written contains two letters ; one to her mistress, directed to her master ; the other to Dr. Stebbing.

' SYDNEY, Jan. 21st, 1802.
Honoured Madam,
With pleasure I cannot describe, I am per mitted to take up my pen and write to you, to acquaint you with my arrival in safety at Port Jackson, Sydney, New South Wales, on December 20, 1801.

As I left the ship, and was about to be landed, the shore, as I approached it, put me very much in mind of the Cliff on the banks of the river Orwell. The houses, backed by the hills, so much resembled that happy spot, that it put me in good spirits ; and had I but seen your smile to welcome me, I should have been happy indeed. But I thought of you, of your prayers, your advice, your kindness and consolation ; and when I saw land so much like my own dear native home, I really felt as if I was not entirely banished from old England.'

Your advice relative to my conduct on board the convict-ship was strictly followed ; and every morning I prayed that I might keep it, and every evening I thanked God for his help. I had much influence with the female convicts who came out with me, and prevented many murmurs and one outbreak among them. So that, you see, dear lady, others reaped the benefit of your instructions as well as myself. '

Captain Sumpter gave me a good character to the governor ; so that I was not two days upon the stores, but was taken off them by Mr. John Palmer, a gentle man of the highest respectability in the colony. He came out as purser in the Sirius, with Captain Arthur Phillip and Captain John Hunter, in January, 1787, Captain Phillip was the first governor of this place. Mrs. Palmer is very kind to me, and is as benevolent as yourself. She is a niece of a famous physician in London, Sir William Blizzard ; and she says, dear lady, that she has heard her uncle speak of you. Only think that I should be so fortunate as to find a good mistress, who had some knowledge of you, even in this- distant land ! I feel this a great blessing. '

After the loss of the Sirius, on a reef off Norfolk Island, Mr. and Mrs. Palmer undertook the manage ment of the Female Orphan Asylum. This institution was established by Governor King, who purchased, for the residence of my master and mistress, the elegant house in which they now live, of Lieutenant Kent, who returned to England two years since in the Buffalo.