The Boddingtons was built in 1781. She was the next convict ship to depart Ireland for New South Wales after the departure of the Queen in April 1791.

The Guard consisted of soldiers of the New South Wales Corps.

Richard Kent was employed as naval surgeon. He was informed of his appointment and the duties expected of him in December 1792..... He was to assist the surgeon of the Boddingtons in the necessary attendance of the sick and also enforce a compliance with the stipulations made with the contractor Mr. Richards for the maintenance and supply of the convicts and guard during their continuance on board. He was granted leave of absence from the Navy for the purpose of the voyage and would be paid at the rate of twelve shillings per day until the time of his return to England. He was expected to see that adequate medicines and other necessary items were provided by the contractor and that they were administered as required. [1]

In correspondence written at the Cove of Cork by Richard Kent on 6th February 1793 some of his preparations for the voyage were revealed....

The Boddingtons arrived here on 23rd of last month, where I found the convicts had been for a considerable time waiting our arrival, and many of them on board the Hibernia, where they had been for seven weeks, very ill in fevers and dysenteries. We received from three sloops eighty nine male convicts, all healthy, and the remainder to make 125 from the Hibernia, which, at coming on board appeared in health. They had not been long on board before several of them complained, and symptoms of fever very apparent amongst them, tho' they were properly wash'd and cleans'd. They are now getting better, and I hope to put a stop to its progress before we get into warm weather. I took the five over the stipulated number contracted for from a letter I received from the sheriff, in consequence of a request of his Excellency the Lord Lieutenant that we might take as many more as the ship could conveniently carry. In consequence of taking these we have been obliged to stow twelve casks of water on the main deck. There is a great many more females here than were contracted for. The Boddingtons cannot carry one more of them than her number. The Sugar Cane, I believe, may, as she has better accommodation than the Bod'n. She has not arrived here yet.

One soldier has deserted since our arrival here. They are a very troublesome sett, and require more looking after than the convicts.

The convicts have been served with fresh beef since their being embark'd, at the rate of four pounds between six, with oatmeal breakfast and bread as stipulated. This they complain of, so have ordered them to be supplied agreeable to contract. The fresh beef was given at the instance of the contractor's agent, in lieu of their rations.

If the winds will permit, Captn. Chalmers informs me that he will be ready before or by Monday next. I wish sincerely it was sooner; but as the ship was shamefully sent away from the river, without being properly stowed, and the 'tween decks as full as they could stow, it requir'd a considerable time in making room to put the stores away; and I fear from the hurry in stowing the water casks that many of them may be found deficient, which will be attended with disagreeable consequences. I hope my taking the five over will meet your approbation. The sheriff has not sent the proper lists with them, but he informs me he had not their crimes as they had been collected from all parts of the kingdom. This will be unpleasant, as there will be no discriminating those guilty of great offences from those whose offences may be small. As I think it my duty to inform you of every particular, hope you will excuse my being so tedious....I am etc. Richard Kent. - Surgeon Superintendent Kent to Under Secretary Nepean. [2]

The Boddingtons departed Cork on 15 February 1793.

In correspondence written on 18 March 1793 to Under-Secretary Nepean, Richard Kent told of a conspiracy on board and punishments to convicts....

National Achives: - Letter from Richard Kent, surgeon aboard the Irish convict transport Boddingtons in the Atlantic Ocean, informing Evan Nepean of a conspiracy to take over the vessel, carry her to America and murder any crew that offered opposition. The scheme had been foiled when the irons of one convict were found cut through.

A soldier named John Watts, sent on board from the Savoy prison, had been in league with the ringleaders, Thomas Murry, Patrick Morrisson and James McGarr. He was to be kept in irons until arrival at Port Jackson where he would be handed over to the Governor. Thirty-six convicts had been punished by flogging which, for the ringleaders, would be repeated. Kent still hoped to maintain the health of the transportees despite the difficulties.

Health of the Convicts

Charles Bateson in The Convict Ships (pp44-45) included part of Richard Kent's report to the Home Department in 1793 in which he stated: I must say that it would be right to bind down the captains of ships carrying convicts under the direction of an agent, that he might comply with the orders given him for the preservation of the lives and health of the convicts; for, if I had not persevered and got everything done myself on the Boddingtons, for the cleanliness and comfort of the convicts, I do believe there might be a great mortality amongst them; for my orders respecting them were never attended to, and Captain Chalmers told me he only came in the ship to navigate her. After which I contrived to get the convicts themselves to preserve order, cleanliness and regularity among one another, and I am happy to say that the trouble I took in keeping them in order was amply compensated in the little trouble there was with them in the medical department.

On 7th August the Boddington transport arrived from Ireland, having sailed from Cork on the 15th February, with one hundred and twenty-four male, and twenty female convicts, of that kingdom, on board, provision calculated to serve them nine months after their arrival, and a proportion of clothing for twelve months. The Irish convicts had attempted to take the ship; but their design had been frustrated by the vigilance and activity of the master and a subaltern's party of the New South Wales Corps. No ship could have brought out their convicts in higher order, or could have given stronger proofs of attention to their health and accommodation, than did this vessel. Each had a bed to himself, and a new suit of cloaths to land in. On the part of the crown also, to see justice done to the convicts, there was surgeon of the navy on board, and a superintendent; and on the part of the contractor, a surgeon also. They had not any sick list, and had lost only one man on the passage. The convicts on quitting her, gave their Captain (Mr. Robert Chalmers) three hearty cheers, as a token of their gratitude for his humanity and good treatment of them....... Arrival of the Boddingtons - G. Patterson 1793


Lieut-Governor Grose to the Right Hon. Henry Dundas 3rd September 1792, ....
Sir,
I have the honour to inform you that the Boddingtons transport, with 124 male and 20 female convicts from Ireland, arrived here on 7th ultimo. The stores she brings are in good condition, and the prisoners, according to their own account have been exceedingly well treated; they are in much better health than any I have ever seen landed here, and have had but one death on their passage. [3]

The Boddingtons departed Port Jackson bound for China on 13 October 1793.

In 1805 Boddingtons was stranded in the River Thames off Blackwall, and became a wreck.


Convicts of the Boddingtons identified in the Hunter Valley -

2). In 1810 Hugh Murphy who had arrived on the Boddingtons received his Certificate of Freedom being restored to all the Rights of a Free Subject in consequence of his terms of transportation being expired.

3). The Belfast Newsletter reported on 27th August 1790 ....At Lifford (Donegal) James and Hugh Dougherty were tried for stealing two cows near Buncrana; James was found guilty and received sentence of death; she has since been ordered for Botany Bay.

4). Hunter Valley convicts / passengers arriving on the Boddingtons in 1793

5). John Butcher of 102nd regiment arrived free on the Boddingtons (CSI). - From the Historical Records of NSW p. 4 - John Butcher was one of the convicts who escaped to Timor in March 1791. Apparently he is identical with the convict whose name Collins gives as Samuel Broom. He wrote to The right Hon. Henry Dundas from Newgate prison on 23rd January 1793....It ill becomes a person in the low sphere I move in to address a person of your exalted character, nor should I have presumed to have taken that liberty but for the following reason: Having been brought up in the thorough knowledge of all kinds of land an capable of bringing indifferent lands to perfection, I had an offer some time ago of going to Botany Bay to endeavour to make that land more fertile than it has ever appeared to be... It is impossible to say which of the two names was an alias. Butcher was subsequently allowed to enlist in the New South Wales Corps and in September 1795 received a grant of 25 acres. (Select here to read more about his remarkable escape from the colony in 1791)

7). Table showing the number of Convicts reported as having quitted NSW: 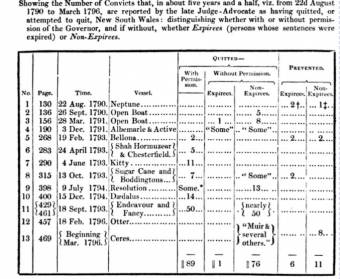