The Bencoolen was built at Liverpool in 1818.

In the Catalogue of Chief Secretary's Office Registered Papers, National Archives Ireland is a file of papers relating to the Bencoolen. Included is a letter from Robert White and William Wood, sheriffs of Dublin city, to William Gregory, Under Secretary, Dublin Castle, enclosing list of male convicts placed on the brig 'Atlas'. Their efforts to avoid the frequent occurrence of the arrival of the convicts in an 'inebriated' state was emphasised - they spent all the previous day and night at Newgate prison (Dublin) to ensure that the convicts had no access to alcohol.

This was not the case with the Cork City Jail which Dr. Edward Trevor considered was being poorly managed. He made great effort to empty this jail of convicts because of the poor conditions inside.

On 22 April 1819 he wrote to William Gregory, Under Secretary, Dublin Castle, concerning varied state of clothing and health of the 310 convicts recently embarked on convict ships Bencoolen and Mary. He commented on the condition of convicts sent from Newgate jail, Dublin; Kilmainham jail, Dublin; and Cork city jail and criticised in particular the 'filthy' state of prisoners from Cork city jail, and their drunken behaviour. [1]

Dr Edward Trevor, Cove [Cobh], County Cork, superintendent and medical inspector of convicts, to William Gregory, Under Secretary, Dublin Castle, concerning arrangements for transportation of convicts. Reports the filling of the convict ship 'Bencoolan' [Bencoolen] destined for Botany Bay and the convict ship 'Mary'. Emphasises his efforts to empty Cork city jail of convicts, because of its poor management and conditions.[1]

The Bencoolen sailed from the Cove of Cork on 24 April 1819 with 150 male prisoners.

The Military Guard consisted of Lieut. Prior and Ensign Hayes of the 46th regiment and a detachment of the 46th and 87th regiments. 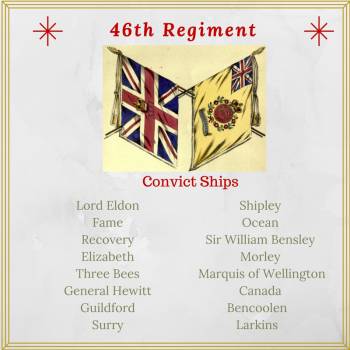 Theodore Bryant Bartley came as a free passenger on the Bencoolen. Soon after arrival he was engaged as tutor to Lachlan Macquarie, son of Governor Macquarie. [4]

This was William Evans' second voyage as surgeon superintendent on a convict ship.

He kept a Medical Journal from 13 April to 4 September 1819. He recorded in the Journal a case of food poisoning that took place on 7 - 9 June. The crew had caught a Dolphin two days previously which was hung from the rigging for a day without being gutted. Two of the guard were taken ill and six of the crew. One of the prisoners was also taken ill. The worst cases were of the sail maker and Mrs. Clancey, the Sergeant's wife. They suffered with languor, heaviness and faintness, pain in the bowels and a copper colour to their faces with large wheals or lumps.

The surgeon remarked on the good behaviour of the prisoners. No corporal punishment had been necessary. Regulations were drawn up at the start of the voyage and a committee of 12 prisoners appointed to settle disputes. He knew that other convict voyages had been characterised as scenes of gambling and impropriety but not a single pack of cards had been found on the Bencoolen. Instead the prisoners paid great attention to their prayer books and religious and moral tracts. The surgeon believed their decency and propriety of behaviour and submissiveness to all those placed over them indicated they meant seriously to retrieve their injured characters.

Classification of the prisoners was by a separation of the young from the old. The better-behaved prisoners improved the manners of the others, rather than being corrupted by them. [3]

The Bencoolen arrived in Port Jackson on 25 August 1819 with the convicts in excellent health, none having died on the passage out. The voyage took a total of 123 days and they sailed 15,762 miles.

On the 30th August, five days after arriving in Port Jackson, John Thomas Campbell came on board and mustered the prisoners who said they were pleased with their treatment and made no complaints.

On the 4th September the convicts were disembarked at daybreak, and the guards at 9am.

The Sydney Gazette noted that the prisoners landed from the various vessels (the Canada, Mary and Bencoolen), during the previous week appeared to be in a healthy and comparatively happy condition. They spoke of the kindness and humanity they received from the Commanders and Officers in the most grateful terms of praise; who expressed universal satisfaction at their orderly conduct and exemplary good behaviour during the voyage.

In September 130 prisoners were trans shipped on the 'Admiral Cockburn' to Hobart.

The Bencoolen was to depart for Calcutta in October 1819

1). Convicts and passengers of the Bencoolen identified in the Hunter Valley.

3). Of 150 convicts on the Bencoolen - 4 Protestants and 146 Catholics - Historical notices of the several rebellions, disturbances ect

4). Convict Henry Comerford later became overseer at the lime burner's camp and Clerk to the Bench of Magistrates at Patterson's Plains.

5). Convicts received on board the Bencoolen at Cove of Cork in Ireland - National Archives

6). National Archives. Reference: ADM 101/7/10 Description: Medical journal of the convict ship Bencoolen from 13 April to 4 September 1819 by William Evans, Surgeon and Superintendent, during which time the said ship was employed on a voyage from the Cove of Cork to New South Wales