The Guard was commanded by Captain Irvine of the 28th regiment and included Ensign Stanwell and 28 rank and file of 28th regiment, 1 of the 17th regiment, 7 women and 10 children, two having been born on the voyage. 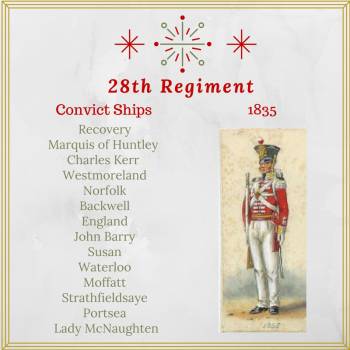 This was John Love's last appointment as surgeon superintendent on a convict ship. He was well experienced having been first appointed as assistant surgeon twenty two years previously.

His appointments to convict ships included to the John in 1829, Mellish in 1830 (to VDL), and the Atlas in 1833 (to VDL). There is no Medical Journal available for this voyage.

Two prisoners died on the voyage out.

One hundred and fifty male prisoners arrived in Port Jackson on 29 September 1835. It was a clear day at 6am in Sydney on the 29th September, with winds from the SW, however by midday the skies had clouded over. Rain began the following day.

The prisoners were probably mustered on board. The convict indents include name, age, education, religion, marital status, family, native place, trade, offence, date and place of trial, sentence, former convictions, physical description, and remarks. There is no indication where they may have been assigned however there are occasional notes re colonial convictions, pardons and relatives already in the colony.....

Patrick Leary, grocer from Cork was blind in the left eye. His brother Cornelius Leary had arrived 4 years previously

John and Thadie Cronin, brothers convicted of stealing poultry, both on board.

Patrick and Dennis Lawyer were cousins

There were seven young prisoners on board -

The prisoners of the England and Backwell were landed together on Friday 16th October 1835. The Australian reported that they were mostly tradesmen and artificers with relatively few labourers. [2]

The Backwell brought with her the news of the death of the widow of the great navigator Captain James Cook. Elizabeth Cook survived her husband by 56 years and lived to be 94 years of age.

The Backwell was appointed to do survey work following disembarkation of the prisoners and departed for Mauritius in November.

The Backwell is on a list of Wrecks of British Shipping from Lloyds' Lists 1835 - Backwell, Boat picked up 30 January at Bourbon with 'Backwell, London, Dowson, 'on it'.[3]

1). Select here to find other convict ships arriving in New South Wales in 1835.

2). Convicts and passengers of the Backwell identified in the Hunter Valley region