They were brought into London and perhaps incarcerated in Newgate. Some were taken directly to the ship.

By 1821 Elizabeth Fry and her fellow workers were not only attending Newgate prison in an effort to ameliorate prisoners' hardships but were also visiting convict ships.

Embarking on the Mary Anne

Soon after the ladies first visited these ships, the women ceased to be received on board at Deptford ; but the ships were moored for this purpose in a less frequented part of the river, below Woolwich. The mode in which they were brought on board, long continued to be highly objectionable ; they arrived from the country in small parties, at irregular intervals, having been conveyed on the outside of stage coaches, by smacks, or hoys, or any conveyance that offered, under the care of a turnkey ; often have the ladies, when engaged in their interesting occupation, seen a person of this description come alongside in a wherry with a group of unfortunate creatures under his charge wayworn, and ill, or perhaps a solitary outcast brought upon deck, lamenting her misfortunes in the broad dialect of some far distant county - a small bundle of insufficient clothing being frequently the only preparation for the long voyage before her. In some instances, their children, equally destitute as themselves, accompanied them ; in others, their sufferings were increased by sudden separation from their young infants. Often did Mrs. Pryor and her friend and companion, Lydia Irving, quit these scenes, in which they had passed nearly the whole day, not to return to their homes, but to go to Whitehall, to represent such cases, that the necessary letters should be dispatched without the loss of a post, ordering the restoration of these poor nurslings to their mothers, before the ship should sail. In addition to these evils, the women were almost invariably more or less ironed, sometimes cruelly so. On board the Mary Anne, in 1822, Mrs. Pryor complained that " the prisoners from Lancaster Castle arrived, not merely handcuffed, but with heavy irons on their legs, which had occasioned considerable swelling, and in one instance, serious inflammation.' [1]

Some of the prisoners were embarked at least a month before the Mary Anne set sail - On Tuesday 27 November 1821 the Mary Anne was lying at Woolwich when prisoner Elizabeth Montague from Oxford, under sentence of transportation for 14 years was embarked. Others came on board later....Tuesday morning (4th December 1821) 40 female convicts were removed from Newgate, and put on board the Mary Anne, lying at the Galleons, below Woolwich, which is destined for New South Wales. The ship takes out 200 and will sail in a few days. [5]....Many of them are banished for life; amongst them the notorious Bill Soames' wife, together with Amey Steele, the young woman who was ordered for execution on Tuesday last. Cadman's wife still remains in Newgate.[7]

A later newspaper gives a little more detail......Yesterday (4th December 1821) morning at half past six, forty-four female convicts were removed from Newgate, under an escort in hackney coaches to Wapping and forwarded in a boat to a receiving ship lying at the Nore, preparatory to their being sent to New South Wales. [6]

The Mary Anne with about 130 female convicts and nearly 70 children, which arrived at the Motherbank on Tuesday, proceeded on her voyage for New South Wales at the same time as the Phoenix which had been detained because of contrary winds. [8]

Catherine MacLeod, her daughter Helen and son George arrived as free passengers on the Mary Anne. Catherine was the wife of Gilbert MacLeod who had been transported on the Asia in 1820 for the crime of sedition after becoming involved in the Scottish uprising in 1820.

I observed many complicated ailments among the women and was often perplexed in endeavouring to give them a name and more so in devising a rational principle of cure. Often times I have been alarmed by symptoms which seemed to denote sudden danger to life; and they were not simple fits of hysteria, but commotions in the nervous system originating in a reciprocal action as it seemed of the uterine system and mind, from ideal or mechanical causes. I found very few females menstruate regularly and learned that the uterine secretion generally ceases whilst the female convicts lie in Newgate, and in other jails, hence from the suppression of this periodical secretion arise many disturbances in the female system. Another cause of disturbances is obstipatio, on some occasions I have had between one and two dozen women in one day complaining of this ailment and in investigating the case I have been surprised by discovering that no evacuations had been made for the space of two weeks. In all such cases reason dictated the use of emollient enemata, but the genuine delicacy of the English female forbad their use, and only in two instances could I persuade those degraded women to submit to its employment.

The case of death that occurred was one that might have been expected so to terminate as the woman had not menstruated for several years and had long laboured under chronic visceral diseases. The immediate cause of death seemed to be a cancerous affection of the stomach.

On the whole I must observe that the women and children enjoyed a high state of health during the voyage owing to a rigid system of cleanliness and good discipline having been maintained.

To read an in depth account of James Hall's life and career select King-Hall Connections. 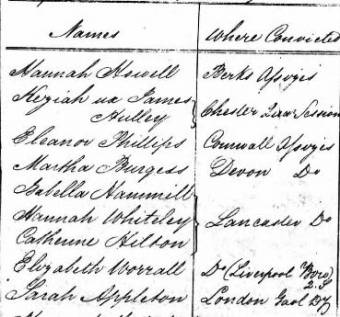 On arrival in Hobart seven seamen of the Mary Anne were disembarked and incarcerated for mutinous conduct and neglect of duty. The seven men - John Anderson, Henry Linzer, Thomas Dale, Alexander Frazer, John McMurtry, John Price and George Boyce were all later sent to Sydney on the Richmond. Captain Warington made several attempts to have them dealt with particularly George Boyce who attempted to strike at him. They were later discharged from duty.

The Mary Anne arrived in Port Jackson on 20 May 1822 with the remaining 62 women. 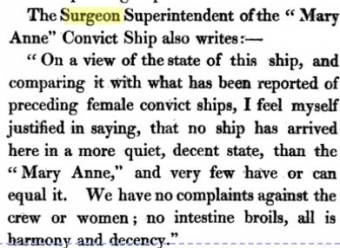 The Mary Anne departed Sydney bound for Batavia on 25th June 1822. Captain Warington saw the Sandbuy Shoals which were two dry sand banks on 29th July 1822 in a transit bearing NNW and SSE of each other which he made in lat 7 45'S., long 117 13 1/4' E by good chronometers. (The India Directory: Or, Directions for Sailing to and from the East Indies ... By James Horsburg)

1). Select here to read of the a dispute between surgeon James Hall and Henry Grattan Douglass over convict girl Ann Rumsby (Historical Records of Australia) ; and also The Sun 29 February 1948

5). Hunter Valley convicts / passengers arriving on the Mary Anne in 1822 -

[3] National Archives - Reference: ADM 101/52/1 Description: Medical and surgical journal of the female convict ship Mary Ann for 27 October 1821 to 25 May 1822 by James Hall, Surgeon and Superintendent, during which time the said ship was employed in a voyage to New South Wales