Seizure of the Brothers


Use the Search Box above to find your Hunter Valley Ancestor.
In May 1844 the inhabitants of the Stroud district were kept in a state of apprehension for some time, fearing a visit from six convicts who had made their escape from Newcastle Convict Hospital on 21st April.

The sergeant who sent them to the hospital from the Stockade at Nobby's, cautioned the people at the hospital, that they were desperate characters, and that he suspected they had some mischief in view, however his warning was unheeded and the convicts managed to escape.

The convicts, two of whom were seamen, boarded the Brothers lying in Newcastle harbour on 21st April. The Brothers had just arrived from Sydney with a small cargo of hardware and soft goods and only two of the crew were on board, so she was easily taken by the escapees. They were seen steering to the south however the wind changed, and they bore north.

Only having a small quantity of provisions on board they landed at Sugar Loaf Point, a narrow strip of low sandy land separated from the interior by a succession of large lakes, connected by impassable rivers. 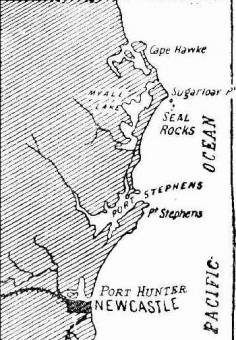 Here they wandered about for eight days without food, until they came upon a black woman in a canoe who paddled towards them after they 'cooeed'. They told her they had been shipwrecked and she agreed to take them to a cattle station six miles from Carrington where they bailed up a stockman and robbed a hut.

When Captain King of Australian Agricultural Company heard of the escape from a native who galloped into Carrington with the news, he immediately dispatched guards to out-stations and a party to proceed up the Myall River to attempt to capture the escapees.

Nothing was seen of the prisoners however and the Mounted Police under Lieutenant Gall were then sent to the district. Although pursuit parties were sent in two different directions, they also failed to catch up with the bushrangers. The six men had made their way to 'Bunderbot', a cattle station belonging the the A.A. Company and bailed up all the inmates for several hours before decamping with firearms, provisions, clothing and horses.

Back in Carrington, upon hearing of this, Captain King immediately set out with two troopers of the Maitland Police and several other well mounted citizens. A reward was offered and their descriptions posted in the newspapers -

James Edwards arrived on the Royal Admiral in 1830. A native of Kent, he was a brass founder by trade, 5ft 2 1/2' with a sallow complexion, brown hair, and dark brown eyes. A tattoo of the moon adorned his right arm.

Henry Elgar arrived on the Waterloo in 1833. He hailed from Kent also and was 31 years of age. His occupation was given as seaman and farm labourer. He was 5' 6 ' with a fair complexion, brown hair and hazel eyes.

Henry Hughes arrived on the Exmouth in 1831. He was 27 and was employed as an errand boy in London. He was shorter than average age 4ft 5 in and had a ruddy fair and freckled complexion and brown hair.

Samuel Ringwood arrived on the Henry Porcher to Van Diemen's Land and the Moffatt to Sydney. He was 24 years of age and came from Norwich where he had been employed as a groom. S. Ringwood was tattooed on his left arm.

Buchanan Wilson arrived on the Marquis of Huntley in 1830. He was 32 year of age and was born in Glasgow. He gave his occupation was farm boy and weaver on the shipping indents.

Robert Whitehead arrived on the Lord Lyndoch in 1838 and was 27 years of age with a fair ruddy and freckled complexion sandy flaxen hair and light blue eyes. He had been a plastered and slater in Bath. he had several tattoos and distinguishing marks - WSS MAY and woman, inside lower right arm, half moon 7 stars W inside lower left arm, 7 dots on back of left hand, blue ring on each finger of same, scar on back of fore and middle finger of same, I am the Lord of all, outside right leg.

Their tracks were followed until dark, and the search was renewed the next morning by a strong party of the Company's servants, (headed by Captain King and Dr. Colin Buchanan), two mounted police, and nine blacks, who, after following up the track for nearly twenty miles, succeeded in capturing them at their bivouac, just as they were preparing their repast.

They were captured about twenty miles from 'Bunderbot'. The six men were secured immediately and returned to the Stroud lockup where they were examined before Captain P.P. King R.N., and P.G. King, Esq., J.P., and fully committed for robbery and being illegally at large with firearms.

Captain King generously rewarded the party who made the capture with a gift of &pound30, independent of the reward to be recovered under the government regulations. From the fatigue the bushrangers experienced since abandoning the vessel, one of them became so ill that Capt. King kindly provided two horses and a cart to take the whole of them to Raymond Terrace, where they would go on board the steamer for Newcastle under an escort of the mounted police.

The captors have shared a reward of &pound90, of which &pound30 was given by the Australian Agricultural Company, who also liberally rewarded the blacks by whom the snug retreat was discovered wherein the bushrangers contemplated remaining a few days to rest themselves. They acknowledged that some of their party had been in the bush before, which was very evident from the caution which had been employed in defacing or removing everything, even the dung of their horses, by which they might be traced, and the only fire they had made was carefully covered over with soil and leaves ; indeed, it was only the quick and practised eye of the blacks that led the party to their encampment. Their horses they had turned adrift about a quarter of a mile from their hiding place, and as the traces of the feet were imperceptible, it was ten hours before they were found, although the party was nearly the whole of the time within four hundred yards of them. [1]

The six men were later sentenced to transportation for life to a penal settlement.

1. Sugarloaf Point - On the coast of N.S.W., to the north of Port Stephens, in the county of Gloucester, and near the north end of Myall lake, 220 miles from Sydney. - Wells Gazetteer 1848

2. Buchanan Wilson, who took part in the infamous mutiny at Norfolk Island in 1834 was sent to Van Diemen's Land for his part in the above escape. He was executed there for robbery under arms in 1851.

3. Researcher contribution - Robert Whitehead - After his first escape and recapture Robert Whitehead was transported to Tasmania via Waterlily in 1844. He made his way back to the UK (he claimed from Tasmania) and was caught under the name of Thomas Maylor in Exeter for stealing a carpet bag in August 1851. He was sentenced again to be transported for life to Western Australia via Ramillies arriving Perth 1854. (contact researcher)