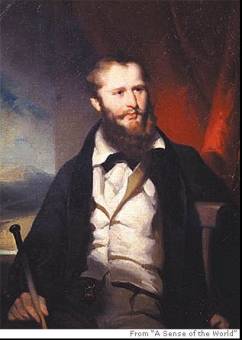 Hunter Valley settler George Wyndham kept a Diary between the years 1830 and 1840. In it he records weather events, daily activities on his farm Dalwood including building his house and planting crops. He writes of his excursions and mentions assigned convicts who were sent to him as well as many visitors who stopped by often.

One of his visitors in 1831 was the celebrated 'Blind Traveller', Lieutenant James Holman. James Holman, a Naval Lieutenant on half pay, had lost his sight many years previously and had since travelled extensively throughout the world. He wrote of his visit to New South Wales in Travels in China, New Zealand, New South Wales, Van Diemen's Land, Cape Horn published in 1840.

Below is an extract giving an account of his visit to New South Wales. He doesn't mention which of his Hunter Valley friends he visited in his journal however George Wyndham made a brief note in his diary of the visit of the Blind Traveller to Dalwood on 12th June 1831 -


Having, however, pledged myself to the public to limit my work to four volumes, and being well satisfied that the further extension of the publication, with a view to embrace a detailed narrative of my different journeys through the interior, would be infinitely less interesting and novel, than that part of my travels which related to China, I have endeavoured to allot my assigned space, in proportion to the interest of the different subjects.

New South Wales is a field already so diligently reaped, and China so much resembles a newly discovered land, particularly since the abolition of the East India Company's commercial privileges has rendered our comparative unacquaintance with it the more glaring, that I believe I adopt that course which the reader will consider the most desirable, in passing rapidly over the one, and giving to the other all the room which its great importance demands.

What I have to say, therefore, concerning New South Wales, shall be compressed into as brief a compass as possible. My residence there filled a period of eleven months, during which time I was almost constantly engaged in excursions into the interior, and in visiting all the points of interest connected with the past history of the place, its present aspect and prospects, and the future projects for its improvement. On the whole, I may confidently say that there exists in the Colony a great many sources of reasonable prosperity, from which the happiness of its population in years yet to come may be safely predicted. But of course, as we find in all other infant settlements, there still remains many difficulties to be surmounted, before those just hopes can be realized.

After remaining a fortnight at Sydney, I left that town in the Lambton, cutter, to visit the Australian Agricultural Company's Establishment at Port Stephens, which was then under the superintendence of Sir Edward Parry; and passing from thence to Maitland, and Newcastle, tracked the river Hunter to its source, returning again to Maitland, and from that place to Sydney by steam, having been fortunate enough, at the cost of traversing with unusual speed a very bad and rugged road, to arrive in time for the departure of the
Sophia Jane, the first steam packet that ever navigated the waters of the Hunter. 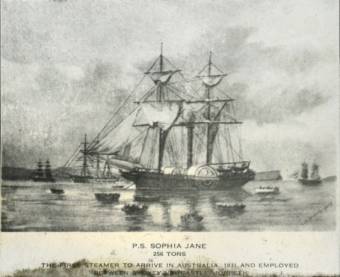 The occasion was one of great congratulation and rejoicing to the settlers on that line, and the two steamers which were then, for the first time, introduced into the Colony, the William the Fourth, and the Sophia Jane, were appropriately called the harvest carts of the garden of New South Wales, in consequence of their great importance to the internal intercourse of the agriculturists.

In the following month (July) I left Sydney again for a tour in the interior, and passing through Argyle, proceeded in a south-westerly direction to the shores of the river Murrumbidgee (Great and Good), which forms the south-western boundary of the Colony. This river, which is deep, rapid, and wide, is not fordable, and on approaching its banks I felt the wind, accompanied by occasional hail, blowing very keenly from the southward; but the view of the snowy mountains, and the ranges in its immediate vicinity, abundantly repay the traveller for the inconveniences to which the trip personally exposes.

From the Murrumbidgee I returned to Argyle, and after traversing Goulburn Plains, I made a de-tour through an inner range of hills at the back of the Blue Mountains, and thence proceeded on the route to Bathurst. On my arrival at Bathurst it was my intention to have proceeded to the northward, still keeping on the western side of the Blue Mountain range, about 150 miles, until I came to Liverpool Plains, nearly in a line with the head of the Hunter, where I proposed to cross the chain, and after lingering a short time with my friends in that neighbourhood, to make the best of my way down to Sydney.

But this intention was frustrated by adverse circumstances. The continual rains had swollen the rivers and flooded the low grounds to such a degree that the country was impassable, and, although there was no scarcity of horses, and the people were so much in want of money, as to be obliged to carry on their dealings chiefly in barter, I could not procure either horses or guides for hire, to enable me even to attempt the prosecution of my desire. In this situation I was compelled to abandon my intention, and to take the new line of road over Mount Vittoria, which was at that time in forward progress, and has since been completed. Yet even here the difficulty of procuring a guide was such, that I was obliged to apply to Government for permission to be attended by one of the mounted police part of the way, which was readily granted to me.

On my journey across the mountain I visited the celebrated cataract, called the Campbell Cataract, by Governor Macquarie, but afterwards re-christened the Bougainville Cataract, by Sir Thomas Brisbane; the former in honour of his lady, the latter in honour of the French Commodore who visited it. The summit of the waterfall is 2800 feet above the level of the sea, and here, much to the horror of the serjeant of police who accompanied me, I stood on the brink of the perpendicular rock that looks down into the yawning abyss, which receives the descending torrent. My companion entreated me not to approach the fearful spot, assuring me that he had been there with some distinguished persons, who would not venture to gaze into that awful depth until he had got a secure hold of them; but I requested him not to touch me, giving him an assurance that I had a complete control over my nerves, and that although I was perfectly conscious of the awful chasm at my feet, I encountered no risk whatever in advancing to the extremity of the ledge of rock. After my return to Sydney on this occasion I remained there until the following month. - James Holman

3). Men I have known by William Jerdan.