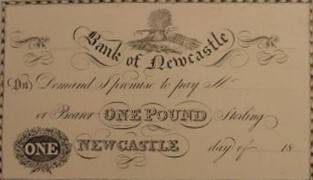 Frederick Boucher arrived in the colony as a free passenger on the Prince Regent in 1824.

In May 1825 in partnership with Captain William Powditch, Frederick Boucher opened a Store at Newcastle. They advertised to house all kinds of marketable produce. Boucher was to be manager. They used a small boat, the Comet, to convey goods to and from Wallis Plains where Agencies were established. John Stronach being the first agent in 1825 and George Cavenagh in 1827.

The partnership between Boucher and Powditch was dissolved in June 1827 when Boucher was accused of forgery.

In advertisements in the Australian in November 1828 Frederick Boucher announced he was opening a bank in conjunction with his Store. The premises where the Store and the Bank of Newcastle were situated were close to the wharf in Watt Street. There was a substantial house, shop and brick built store of 3 floors together with a butcher's shop.........

In another column will be found an announcement of the first Provincial Bank ever established in the Colony, under the title of the Bank of Newcastle.

An institution of this sort may be rendered of very essential convenience and service in facilitating transactions amongst the inhabitants of that extensive and thickly settled district, and in the hands of Mr. Boucher, we are disposed to anticipate the concern will be managed with that prudence and skill which are essential to its success and utility.- The Australian 17 November 1828 - The Australian 28 November 1828


Frederick Boucher begs to notify that he has been induced, at the solicitation of several of the most respectable settlers in this District to open a Banking Establishment to be called the 'Bank of Newcastle'.

F. Boucher will issue Notes payable on demand; and, for the convenience of the public, arrangements will be made to enable the holders to get the Notes cashed in all parts of this district, and likewise at Sydney.

All business usually transacted in concerns of this nature will be conducted on the principle most generally approved. Interest will be allowed on Cash deposits for three months and upwards . - The Australian 28 November 1828


The bank prospered briefly, however Boucher's business dealings became suspect and by 1829 he had left Newcastle and established a business in Sydney. He returned to London in 1834.[1]

[2] Some of the men assigned to or employed by Frederick Boucher at Newcastle and Maitland included: