Health of the Third Fleet Convicts 1791

Health of the Third Fleet Convicts

The eleven ships of the Third Fleet departed England in March 1791.

Atlantic; Salamander, William and Ann departed from Plymouth in March 1791

Queen departed from Cork and met with the other vessels at Madeira.


The Fleet arrived at Port Jackson in October 1791. 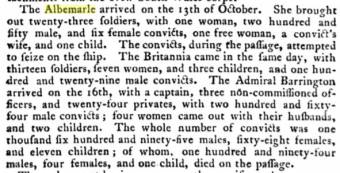 
Health of the Convicts


Below is an extract from the Correspondence of Governor Philip to Lord Grenville regarding the state of health of the convicts of the Third Fleet....

Of the convicts mentioned by your Lordship to be sent out, 1,695 males and 168 females have been landed, with six free women and ten children. It appears by the returns from the Transports that 194 males, 4 females and 1 child died on the passage; and, although the convicts landed from these ships were not so sickly as those brought out last year, the greatest part of them are so emaciated, so worn away by long confinement, or want of food, or from both these causes, that it will be long before they recover their strength, and which many of them never will recover.

Your Lordship will readily conceive that this addition to our numbers will for many months be a deadweight on the stores.

The surgeon's returns of this day are: 'Under medical treatment and incapable of labour, 626.... 576 of whom are those landed from the last ships. [2]