The Sydney Gazette announced the arrival of Richard Charles Pritchett on 12 April 1822......By the Nimrod have arrived as passengers from Calcutta, Colonel A. McLeod of the 8th Regiment of Madras Native Cavalry; and R.C. Pritchett Esq.

Richard Prichett petitioned for a grant of land in August 1823.....

The Memorial of Richard Charles Pritchett respectfully shewith that Your Memoralist arrived in this colony in April 1822 from Calcutta for the benefit of his health and obtained the permission of your Excellency to become a Settler.

That Your Memorialist imported a Capital of £2500 which he is desirous of investing together with the residue of his assets daily expected from India amounting to £1500 mostly in the agricultural line. That Your Memorialist has no land in this colony and he therefore respectfully solicits your Excellency will be pleased to grant him such an allotment in the vicinity of Newcastle for the purpose of grazing and cultivation as will enable him to invest the capital abovementioned Your Memorialist begs leave to state that Mr. Thomas Macvitee and Thomas Winder will be testimony to the truth of the above statement if required. Your Memorialist craves your Excellency's consideration of this Memorial and your your Memorialist as in duty bound will ever pray. [1]

He afterwards acquired by grant or purchase land in the Hunter River known as St. Petrox. Location can be seen far left middle on the map below adjoining the grant of Beresford Hudson

His name is also included in the Register of Land Grants and leases for the town of Newcastle. Allotments 69, 43 and 41

Richard Pritchett became an auctioneer and agent in the firm of MacQueen and Atkinson in Sydney after being granted a license in 1823. He also business man in his own right.

He addressed the audience at a public dinner in honour of the Governor Sir T. Brisbane in 1825.......

Gentlemen; I cannot let the present occasion pass without offering my testimony to the worth of the Colonists of New South Wales [Hear, hear !] Gentlemen ; I came to this Colony from the East Indies with a small investment, prejudiced, I must confess, against the people whom I looked upon as a set of rogues and vagabonds, and assigned servants [Hear, hear !] But, Gentlemen, I am proud to say, that upon an acquaintance with the Colonists, my former prejudices were removed, and I have ever since continued among them, and this public acknowledgement I consider as a tribute due to the utmost integrity and honour I have ever found amongst them. [Loud applause!]

Richard Pritchett died in April 1834. His land at the Hunter was advertised for lease soon afterwards: 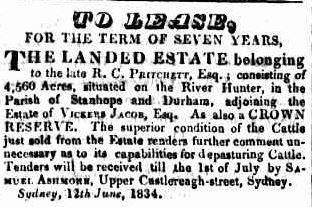 
1). In 1909 part of the Estate was put up for Auction - St. Petrox Estate of 2132 acres (more or less) subdivided into 7 farms, as per lithographic plans. Has a frontage to the Hunter River, and consists of rich Lucerne and Maize Land, with rich gently sloping rises and sound grazing country. Situated 4 1/2 miles from Branxton, where there is a Butter Factory. Milk waggons pass daily; and 11 miles from West Maitland - Sunday Mail 29 September 1909

2). A man named John Robert Pritchett died in a hut on Mount Carmel, on or about Saturday last of disease and neglect. He died possessed of a considerable sum of money. - Sydney Morning Herald 26 October 1867. Inquest Sydney Mail 26 October 1867

[2] Pedigree of the Pritchett family