The Mary Anne was built at Batavia in 1807. This was the first of two voyages bringing female convicts to New South Wales, the other being in 1822.

The Leeds Mercury reported on 2 June 1815, that two prisoners, Mary Griffin and Mary Thomas were to be taken from York Castle and delivered on board the Mary Anne convict ship lying at Deptford in readiness to be transported to New South Wales...... 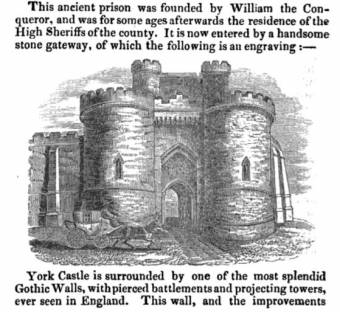 Other prisoners may have first been taken to Newgate where they would have joined women who had come from counties throughout England and Scotland including Somerset, Devon, Lancaster, Surry, Norfolk, Chester, Berkshire, Cumberland and Glasgow.

The transfer of female prisoners from Newgate to the convict ships was described by Elizabeth Fry.........

Frequently batches of female convicts were despatched to New South Wales, and, according to the custom at Newgate, departure was preceded by total disregard of order. Windows, furniture, clothing all were wantonly destroyed; while the procession from the prison to the convict ship was one of brutal, debasing riot.

The convicts were conveyed to Deptford, in open wagons, accompanied by the rabble and scum of the populace. These crowds follow the wagons, shouting to the prisoners, defying all regulations, and inciting them to more defiance of rules. Some of the convicts were laden with irons; others were chained together by twos.

In the Deal shipping news dated 18th July it was reported that the Mary Anne had come down the river to Deal in preparation for departure. [1]


James Bowman was on his first voyage as Surgeon Superintendent and his only one on a female transport. His medical journal for the voyage does not seem to have survived for this voyage or that of the 1817 voyage of the Lord Eldon, however on the voyage of the John Barry in 1819 a journal is available. Select here to read about his organisation of convicts on the John Barry in 1819.

Commissioner John Thomas Bigge's report of 1820 includes his thoughts on the Transportation and Punishment of female convicts.

The Mary Ann arrived in Port Jackson on 19 January 1816, twenty-eight years after the arrival in Botany Bay of the First Fleet convicts in 1788.

Prisoner Jane Digby died on 20th January 1816, one day after arriving. The women would have been mustered on board by the Colonial Secretary. The convict indents include information such as Name, Date and Place of Conviction, Sentence, Native Place, Age and occasional information about Tickets of Leave and Pardons. Sometimes the women were defined by their husband's name e.g. -
Elizabeth, wife of William Robinson and
Sarah, wife of Michael Keating.

The Heritage Branch site at one time described the lumber yard vicinity : The Government Convict Lumber Yard, established by Governor Phillip, was established on the south-west side of the 'Bridgeway' (Bridge Street) over the Tank Stream and east of 'High Street' (George Street). It extended to the bank of the Tank Stream. In 1806 part of the yard was leased to Garnham Blaxcell, a merchant and trader who entered into partnership with John McArthur who leased property across the road in George Street. In 1810 the new governor, Lachlan Macquarie, gave Blaxcell, Alexander Riley and D'Arcy Wentworth a contract to build a general hospital to be completed in 1816, in return for the right to import 45,000 gallons of spirits over the next three years.

Joseph Moss whose occupation was later described as 'dealer'.

George Board, later departed on the Mary [4]

Mary Collicott, wife of Thomas Collicott per Earl Spencer, arrived as a free passenger also. Governor Macquarie referred to her in correspondence to Under Secretary Goulburn dated 22 March 1816......

I have the honor to acknowledge the receipt of your Private Letters under dates the 27th June and 13th of August, 1815, the former recommending Mrs. Collicott and her Family and the latter the Revd. Mr. Youl to my favor and good offices. I can only assure you of my being sincerely disposed to meet your good wishes in favor of those Persons. Mrs. Collicott is an interesting respectable woman, and with so large a Family to provide for is much to be pitied. I have put herself and her whole Family in the meantime on the Store, and intend giving her eldest son a Grant of Land very soon with the usual indulgences granted here to Free Settlers, the Father not being yet eligible for receiving a Grant of Land in his own name on account of his still labouring under the sentence of the law, but it is my intention to give him a Conditional Pardon in January next, which will make him eligible for receiving lands in his own name and to hold any Colonial Office that he may be found fit for. I shall be most happy to afford this unfortunate family every reasonable protection and assistance in my power, in as far as their own situation and the Rules I have laid down for my own Government in such cases will admit of, both on their own account and the warm interest you appear to take in their welfare [2].  The Australian Dictionary of Biography includes an entry for John Thomas Collicott who was..... the only son of Thomas Collicott, who was transported for failing to affix duty stamps to bottles of medicine. In January 1816 Collicott, with his stepmother, formerly the wife of Richard Allen, a physician to the Prince Regent, and members of his and her families, arrived in Sydney in the Mary Ann. They had a letter of introduction from influential friends to Governor Lachlan Macquarie, and Collicott was granted 200 acres (81 ha) of land at the Five Islands. [3]. Mary Collicott was appointed Matron of the Female Orphan Institute which had been established in 1801. She retained the position until 1821 when she resigned and
Susannah Matilda Ward was appointed in her place.

The Mary Anne was one of two convict ships bringing female prisoners to New South Wales in 1816, the other being the Alexander.

The Mary Anne departed for Batavia on 2nd April 1816.


1) Ann Burrell was sent to Newcastle penal settlement for a colonial crime in March 1816. She later married Richard Binder

4). Jane Digby on the list of convicts who died on the passage to N.S.W. - Journals of the House of Commons

[3] The Australian Dictionary of Biography