The Military Guard consisted of 31 non-commissioned officers and privates of the 59th regiment under orders of Lieut. Lucas of the 59th. They were embarked at Deptford on 1st April 1819.

After the Guard were embarked, the John Barry departed Deptford on 8 April 1819 and proceeded to Portsmouth to take on board the convicts from various hulks. She arrived at Spithead on 16 April. On 20th April sixty male convicts were embarked from the Laurel and eighty from the Leviathon Hulks in Portsmouth harbour.

Others who had been held on the Captivity hulk and were embarked on 20 April included William Mattingly, Joseph Mason, William Baldock, Richard Evans, George Wood, Robert Parsons, John Moon, Robert Thrower, William Smith; John Pidgeon who had all been tried at the Old Bailey in December 1818. Emanuel Myers, William Lewis, George Thompson, Edward Hawkins and John Jackson who were tried at the Old Bailey on 17 February 1819 were also embarked at this time.

The convicts were mustered on 21st April and James Bowman set about organising the prisoners for the long journey ahead. This was his third voyage as Surgeon-Superintendent and he was well aware of the necessary steps to ensure as smooth a voyage as possible.

Men were appointed to the various duties necessary for them to attend during the voyage. Three cooks, three hospital men, one to wash for the hospital; one boatswain of the prison and two boatswain mates; eight deck clearers, four swabbers, four sweepers, two to fill the cisterns with water, one to have charge of the windsails; two barbers, twenty four hatchmen for the prison, four to be on duty at a time and relieved every two hours, these men to be answerable for anything that may occur in the prison day or night, and report to sentries in the hatchways every half hour. Three teachers were appointed to attend to the school.

The convicts were to sleep four in each berth, six to mess together and one to be caterer of the mess and receive the provisions. Two delegates from the convicts to see the ship's steward serve the provisions, to be answerable for the quantities issued, and to be changed every day. The beds, blankets and clothing were marked according to each man's number on the embarkation list. [1] Select here to read a description of ship-board prisons.

On 22 April the day was fine and the beds were brought on deck at 7am. The lower deck and berths were cleaned and fumigated and all convicts were on deck during the day. Two more convicts were sent on board from the Leviathan hulk by an order from the Secretary of State Office. On 24 April fresh beef and vegetables were received on board and on the 27 April the weather was fine so the berths were cleaned and fumigated and the convicts washed their clothes. On the 28th April, additional supplies were provided from the victualling office at Portsmouth and on the 29th a bag containing dispatches for Governor Macquarie was sent on board together with letters from the post office. On the 30th April 1819 about noon the ship got under weigh and proceeded to sea through the Needles. Many of the men were sea-sick during the next week. They were mustered at the end of the week and given a pint of wine each by Dr. Bowman. [1]

After a voyage of 149 days, the John Barry arrived at Port Jackson on Sunday 26th September 1819 with 142 male prisoners just five days after the Daphne arrived with prisoners from Ireland.

Commissioner John Thomas Bigge arrived as a passenger on the John Barry accompanied by his brother in law Thomas Hobbes Scott who had been appointed Bigge's Secretary. 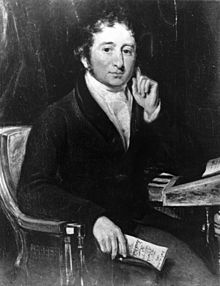 They visited Newcastle to conduct enquiries in January 1820 and in all spent 17 months in the colonies travelling around New South Wales and Van Diemen's Land. John Thomas Bigge returned to England on the Dromedary in February 1821.

On Thursday morning His Excellency the Governor returned to Town, having completed the General Muster for Hawkesbury and all its Districts; and the same day the prisoners arrived per the John Barry were landed, and inspected by His Excellency, who was accompanied by John Thomas Bigge, Esq., Commissioners, and attended by the Officers of his Excellency's Staff. His Excellency expressed much satisfaction at the clean and healthy appearance of the men, whom he questioned relative to their treatment on the passage, and required that if they had any cause of complaint they would make it known to him; and we are happy to say that the reply made by the men unanimously, was highly satisfactory. His Excellency afterwards addressed them in terms of admonition, hoping that by an amended course of life they would feel its present advantages, and be encouraged to look forward to that clemency which none but the deserving could hope to participate in. The people were afterwards distributed, and sent to their various places of employment in the usual way.

At least one of the prisoners was sent to the General Hospital in Sydney on arrival. He was visited there by James Bowman a few days later, which event sparked an enquiry as to the hierarchy of the medical staff at the hospital. ....... House of Lords The Sessional Papers 1801 - 1833

1). James Bowman was also employed as surgeon on the convict ships Mary Anne in 1816 and the Lord Eldon in 1817

2). Prisons and passengers of the John Barry identified in the Hunter Valley region