The convicts mentioned in The Times on 9 August 1817 may have been those destined for transportation on the Ocean - On Wednesday night, between 7 and 8 o'clock, 22 convicts were put into an open wagon in the Old Bailey yard, which soon afterwards drove off on their way to Portsmouth for embarkation to Botany Bay.

The early hour attracted a greater crowd than usual outside; and a curious incident occurred. Several persons climbed up, as usual on the outside wall, to take a view of the convicts.

One of them was imprudent enough openly to claim acquaintance with one or two of the most hardened; when the officers in attendance, suspecting him to be an old offender, rushed out at the gate, and took him into custody. He was lodged in Newgate with some difficulty [1].

The Ocean sailed from Spithead on 21st August 1817 and called at St. Helena on 31st October where she remained a week. [5] 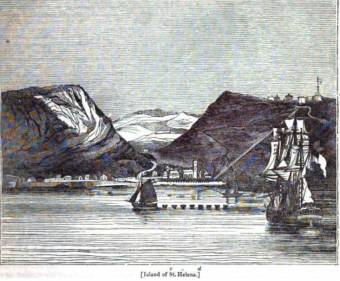 George Fairfowl kept a Medical Journal which commenced on the 24th June 1817. It is a detailed journal of the particular cases however not as informative as to the conditions on the vessel as his later journals.

His first case was that of free passenger Edmund Shackley who took ill in July after bathing his feet in cold water. [4]

The Ocean arrived at Port Jackson on 10 January 1818 and anchored in Sydney Cove in the afternoon. Two male prisoners died on the voyage .... Augustus Golding and William Tarry who both died of consumption. One prisoners was discharged and sent home from St. Helena. [6] The other prisoners arrived in general good health, though several had been afflicted with inflammation of the lungs which was cured during the voyage.

The Guard was a Detachment of the 48th. Regt. under the Command of Lieut. Campbell of the same Corps. [6]

Rev. Sir,
I herewith transmit you a list of the names of convicts landed from the transport ship Ocean, Remmington Master, of whom are ordered by His Excellency the Governor for General Distribution among the settlers within the District where you preside as a Magistrate in the usual way - And to those to whom His Excellency has already assigned them and whose names appear in the accompanying list, you will please to furnish me with a list of the names of the Settlers to whom you shall assign any of those convicts specifying therein the names of the convicts so assigned. These men are now sent forward to Parramatta by water and you are to distribute them according to the list herewith - You will also receive a general list of those now forwarded as well for Windsor and Liverpool as for Parramatta for your guidance in the forwarding of them.
Revd. Samuel Marsden, J.P Parramatta William Cox, Rev. Robert Cartwright, James Mileham - Windsor Thomas Moore - Liverpool
Following is a List of Convicts disembarked form the Ocean and forwarded to Parramatta, Windsor and Liverpool 16 January 1818:

The Ocean returned to New South Wales with convicts in 1823.

1). Passengers and convicts of the Ocean identified in the Hunter Valley