George Hoddle took over the Red Cow Inn from William Winters in July 1843.

George Hoddle at the Red Cow Inn advertised that bullock drivers coming down the country would find good accommodation for their cattle in a paddock attached to the dwelling. He intended to continue his business as a tailor while running the Inn. George Hoddle remained publican in 1844, 1845 and 1846. In November 1845 his twenty nine year old wife Louisa died in childbirth. Two months later on Christmas Day 1845, their 2 months old infant Louisa Sarah also died.

Despite these tragedies, George remained publican at the Red Cow. However in August 1847 less than two years after his wife, he too passed away after a long and painful illness. He was 42 years old and was buried in the Glebe cemetery as were his wife and daughter.

After George Hoddle's death, The Red Cow - an old established Inn was advertised to be let, with applications to go to Mr. Weller.

In November 1847 William Lowance at the Red Cow was advertising to employ a housekeeper, preferably middle aged and accustomed to children. In May 1848 Lowance applied for a license for the Red Cow Inn however this was refused by the Bench and James Wolfe was granted a license instead. A month later Mr. Lowance at the sign of the Red Cow Inn was advertising his household furniture and livestock for sale. Included as well as various pieces of furniture was a brace of brass barrel pocket pistols and the works of Byron.

In October 1848 an inquest was held at the Red Cow Inn on the body of Mary Wolfe wife of the publican James Wolfe. She had died after an altercation with her husband, however the inquest found she died from apoplexy due to the effects of alcohol and frequent use of opium. In June 1849 James Wolfe held an auction at the Inn. He was selling his belongings prior to retiring from the business. Goods on offer included Household furniture of the establishment, kitchen utensils, bar fixtures, and bar furniture, kegs, taps and stock.

William Winter was granted a publican's license for the Red Cow Inn in October 1849. In December of that year he was granted a license on condition that he thoroughly repair the house within six weeks.

The Red Cow Inn became known as the White Horse Inn and was put up for sale in August 1850.

Many years later the Red Cow Inn was referred to as a famous old teamster's rendevous.

1). Map showing the location of the Red Cow Inn 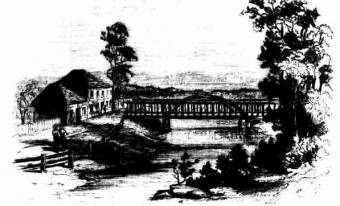 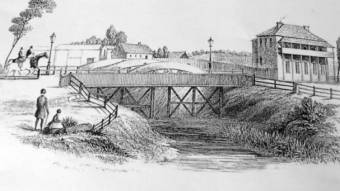