Use the Search Box above to find your Hunter Valley Ancestor.
Patrick Walsh Mallon M.R.C.S., Edinburgh, was in Maitland at least as early as June 1834 [1]. He was acquainted with Dr. Thomas Parmeter and was referred to by Parmeter as that clever Irish surgeon. They spent an hour together at the Maitland races in 1835. 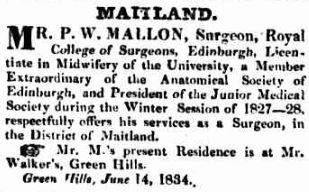 He married Catherine, the daughter of Samuel Graves Irwin R.N., Esq., of Maitland, on 26th January 1836.

Plans for a Hospital

In June 1839 he briefly entered into a partnership with Joshua Dowe. They were planning to equip a small hospital for the reception of patients, however this seems not to have eventuated. James Cochrane had established a private hospital at Maitland in 1839, however the earliest hospital in Maitland dates back 1832 when William Coleman established a facility to treat convict servants.


Patrick Mallon gave a lecture on chemistry at Maitland in August 1840 which was later reported on....Considering the shortness of the notice previous to the lecture the church was numerously attended on the occasion. The lecture was very successful although deficient of some apparatus, which was not obtainable in Sydney. [4]

On 20th May 1840, Patrick Mallon was granted two acres of land at Maitland which had been promised to the late William Aird in 1830.[2]

Patrick Mallon intended to leave Maitland for his native land in February 1841. He planned to sell all his properties and belongings in an auction to be held on 15 March 1841...... Dr. Mallon's lucrative Rent Roll of upwards of £500 per annum including Ranfurly Terrace and the remainder of his eligibly situated property at Port and West Maitland...altogether there were 13 properties including cottages let to Mrs. Liddle and a brick built and beautifully finished residence let to the Rev. Mr. Lynch; a brick Surgeon's residence let at &pound60 per annum; and seven slabbed houses. [5]

He may not have returned to Ireland as in June 1841 he attended the first annual meeting of the Society of Saint Patrick in Castlereagh Street Sydney. [6]

In 1843 he fell victim to the financial depression. He became bankrupt and by May 1843 had lost all but his wearing apparel, household furniture and surgical instruments. The 'Apothecaries Hall' in West Maitland owned by Mallon was advertised for sale by public auction in July 1843. The sale included the entire stock of drugs together with fixtures, bottles etc.

Maitland's inhabitants were industrious and enterprising; many were rather more enterprising in fact than prudent. But in a newly founded township that, perhaps, is a failing which leans to virtue's side. People even then made haste to be rich, not by the slow humdrum process of labour and saving, but by sharp brilliant strokes of business. In 1842 and the following year an unnatural and inflated state of affairs which had previously existed collapsed throughout the colony, and no part of the country suffered more from the panic by which this false show of prosperity was everywhere annihilated than the district of Hunter River, just as in no other part of the country had the sham, while it lasted, attained such enormous dimensions. The credit of West Maitland-even then the chief emporium of the northern districts -fell very low. But the rich natural resources of the Hunter district soon enabled the in habitants to hold up their heads again, and after a little while everything went ahead, if not so fast as before, yet at a safer rate of progression [8]

Patrick Walsh Mallon's wife Catherine died in 1845 after giving birth to a daughter. In August 1849 he moved to Moreton Bay where he took over the duties of Dr. Ballow at the quarantine station for two years.

1). Dr. Patrick Malone attended Sophie Wadsworth in Maitland in 1835 after she had been raped by four men (Sydney Gazette 12 February 1835). ? Patrick Walsh Mallon.