James Cochrane arrived in Sydney on the Palmer in 1835. The Palmer departed Leith on 7th September 1834, sailed via Hobart and arrived in Port Jackson on 25th February 1835 with seventeen passengers including James Cochrane (2)


By April he had commenced a medical practice at Maitland. 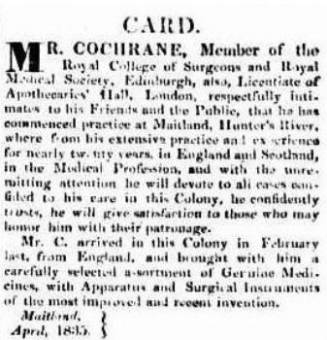 James Cochrane was listed as a qualified medical practitioner for Maitland in 1839.

He gave evidence at the enquiry into the Medical Practice Bill in 1839, stating that he was a licentiate of the Royal College of Surgeons and a member of the Royal Medical Society, Edinburgh; also licentiate of the Apothecaries Hall, London. He dispensed his own medicines in Maitland and also kept a private hospital there. His greatest number of patients at one time was 26. In the course of the year 1839 over 200 hundred had been admitted. [1]

James Cochrane died aged 40 after a few days illness on 29 March 1840. He was buried in the St. Peter's Cemetery, East Maitland.

In February 1842 Auctioneer Mr. A . Dodds was advertising to sell:

'Without reserve, at the Union Hotel, East Maitland on Tuesday the 15th day of February, the whole of the property belonging to the estate of the late James Cochrane, Esq, Surgeon, divided into five lots -

Lot 1, comprising a substantial brick built Cottage, with cellar and out offices, stores, kitchen etc. The remaining four lots have a double frontage of 60 x 90 feet to William Street, being the main street in the township, and adjacent to the new Court House, Gaol etc. In the immediate vicinity of this property a considerable Government expenditure has taken place and a new Court House is to be erected near it which must enhance its value. '

Although Maitland was only ten hours sail from Sydney, so that a person may breakfast at home, come to Sydney, and have four hours to transact his business in and be home early the next morning, many in the town were experiencing economic hardship due to the depression and the property did not sell at this time.

It was again offered for sale in July 1843, and was possibly sold at this time as later in the year Mr. Edye was giving notice that trunks, desk and other articles belonging to Dr. Cochrane that had been left in Edye's possession would be sold if not claimed by some person having a valid claim upon them and willing to pay all expenses.