Use the Search Box above to find your Hunter Valley Ancestor.
Thomas Parmeter arrived in New South Wales on the convict ship Fanny in 1816.

He was employed as Acting Assistant Surgeon at the Lunatic Asylum, Castle Hill in 1817 and was involved in a Court case in 1819 when charges of wrongful use of sick stores were brought against him. William Freeman who arrived on the Mariner in 1816 gave evidence in the affair.

In 1829 Thomas Parmeter wrote the following letter to the Editor of the Sydney Gazette:

'Sir, Nothing but the publishing of my name could drag me forth to feed that 'inquisitive cormorant the public.

I am not answerable for the kindness of my friends (but I do hope I shall always merit their good opinion), but never do I wish, through the unintentional error of any one, to detract where a professional man is concerned.

The delicate way in which you mentioned my affairs deserves my grateful commendation.

It is somewhat indecorous, but I am compelled to speak of myself, which at all times is obviously difficult to do with apparent diffidence.

Well - for fourteen years in this Colony I have honorably engaged myself in professional practice, and never till near four years bodily ailment, did I have cause to fear the catastrophe of gaol imprisonment for debt.

I supported my family by the proceeds of my professional exertion, with what success my living patients can tell.

But this much must I say, I never lost a mother, or a child, during my extensive practice as an accoucheur.

And a number of persons whom I have operated upon, live to recount their sufferings and my success.

When providence afflicted me with my paralytic affection, I sold my farm at Bathurst which, was the gift of Governor Macquarie, to satisfy claims arising from my protracted illness.

In doing this, I did all in my power; I could not sacrifice my eldest son's estate, the gift of Sir, T. Brisbane, at Hunter's River, or my youngest boy's farm, given by a native gentleman educated in England.

No! No! - this my feelings and the law would not allow.

But I am now thank almighty God, greatly recovered, though not able to ride on horseback; but I would willingly devote my professional duties to any sedentary employment; such as the Lunatic Asylum (two years out of fourteen I attended), or Benevolent, or some similar Institution, if any opportunity afford, as I feel myself as competent as ever, only I am not a galloping machine now.

Before I close this letter, I must offer my humble tribute to the talented Sir Astley Cooper of Australia Mr. Bland.

I can given personal evidence to his superior abilities as a Surgeon; and I need not estimate his goodness to the character of an Alworthy, who was so opposite to those soi-disant petit maitres who are summed up in the following district:

Soon afterwards Thomas Parmeter resumed a medical practice at Hawkesbury, although as he had difficulty mounting a gig and could not ride horseback as before, he intended to use a caravan for conveyance to his various patients.

He was a passenger on the Lord Liverpool when she ran aground at Newcastle in November 1830.

In 1831 he wrote 'Confessions of a Bookworm', telling of his early years at the Royal Grammar School, Guildford, Surry, where he was a parlour boarder.

As a young man, he sought fame and accolade in the literary world and although his literary pretensions came to little, his 'biblio-mania' continued. He regretted the years of his misspent youth in this pursuit, wishing instead that he had doggedly followed the path of his (medical) profession.

He wrote that even when he was employed as dresser to the President of the Royal College, Mr. Chandler, senior surgeon of St. Thomas's hospital, his obsessions did not leave him. He spent a month's holiday in literary and historical pursuit at the island of Alderney with a school friend who was an officer of the 67th regiment quartered there. Later he was employed as assistant surgeon to a foot regiment (obtained for by Sir Astley Cooper) Here he was led into the gay life and travelled with them around Exeter before 'abandoning the red coat, for fear it would abandon me'

He was then employed as physician to an illustrious personage and made what was termed the 'grand tour' where he visited Paris and met with Chevalier Parmentir, a celebrated Professor of Chemistry, who claimed a family kindred ship. Here he was once more called to a literary world.

Later he looked on his earlier literary aspirations as youthful foibles - 'Having been duped into an opinion that I was a very clever, shining sort of fellow, I have been led into a vestibule of false fame, and a rotunda of extravagance; a conceited opinion of my abilities led me to associate with a certain company of the Curiosi, that made me hunt after dusty MSS and search folios, a pursuit that made me neglect in some measure the honourable practice of my profession, till I stepped on these botanic shores, where, for near a dozen years I have pursued with success an unrivalled profession, and now, occasionally, as much as my health will permit, 'follow its steps, To heal the sick, the pauper, and insane'

Shun my errors, ye Australian youths; pursue right on the path pointed out by your preceptor or guardian. Whether for the church, law, physic, agricultural or any of the busy crafts of life, let nothing deviate you to the right or left for an old proverb wisely says a 'rolling stone will gather no moss'

Alas! alas! for me that cacoethes scribendi(incurable itch to write) will never leave me, or me leave it, and more especially as my palsy 'cut off the use of my right hand;' and still, such is the fervour of the pen caricaturing, that I learnt to write by my left. But then I have now a good plea, that I have nothing to do. So many are to serve, how can I expect an easy birth such as I formerly held, I mean the lunatic Asylum? for here am I left to rusticate and vegetate my life away on my son's estate at Wollombi Brook. Since fate has so willed it, I am unable to the exertions of active practice. Be warned, by my example, to let the bubble fame alone, for, after all, she will leave you in the mire.

In 1835, twelve months before he died, Thomas Parmeter left his hospital in the care of others and embarked on a journey to visit his daughter Maria.

Parmeter's land shown just below Blaxland on the map above 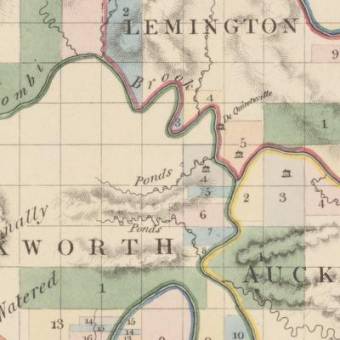