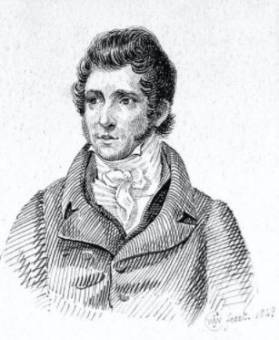 The Hindostan and the Dromedary with Governor Macquarie on board, sailed from England on 3 May 1809. The 1st Battalion of Macquarie's own regiment, the 73rd Regiment of Foot came on both ships. There were no convicts on the Hindostan.

This voyage of the Northampton was the first of those which had a naval surgeon regularly appointed to care for the convicts after the disastrous losses on the Surry and General Hewitt in 1814. The downfall of Napoleon having brought about a general peace, the navy had ceased to require the services of Dr. Arnold and he thought himself fortunate to obtain 'even so unpalatable an appointment' as surgeon on the Northampton. More about the appointment of Naval Surgeons.

Joseph Arnold embarked on the Northampton at Deptford on 7th November 1814. He kept a journal during the voyage, a transcript of which is available at the State Library of New South Wales.

Joseph Arnold died at Padang, on the island of Sumatra, on the 26th of July 1818 aged 35 years. His obituary was published in the Gentleman's Magazine.......

Joseph Arnold, M. D. F. L. S. was born at Beccles, in the county of Suffolk, in the year 1783, and was the fourth son of Mr. Edward Arnold, an opulent tanner in that town.

He was apprenticed to a surgeon and apothecary in 1799, and at the same time placed under an able classical tutor, to receive instruction in the learned languages: for hitherto his education had been confined to a common English grammar-school, In his native place. At the end of the five years, having profited as much as possible by his studies, both scholastic and medical, his father very wisely and liberally determined he should proceed to Edinburgh, where with unabated industry he pursued his professional views and received the honour of a diploma in 1807. A reward never more deservedly obtained.

Upon leaving Edinburgh, he made several attempts to settle as a Physician, but in none of these succeeding to his wishes, he was induced upon the recommendation of a friend, to make trial of the Naval service. He entered agreeably to the regulation of that department as an assistant-surgeon on board the Victory, a flag-ship, under the command of Sir James Saumierez, appointed to the Baltic. This was in April 1808, and in the month of March of the following year, he was promoted to the surgeoncy of the Hindostan, then under orders for our Settlement in New South Wales.

Not to particularise the several changes in his medical career, it may be sufficient to remark in a general way, that he served on board different ships of war, the Hibernia, the America, and the Alcmene, and in various stations in the Mediterranean and the Adriatic, to the period of 1814, when many vessels were dismantled, and he was, to use the seamen's phrase, once more adrift.......

At this crisis, when many applications were rejected, though supported by great interest, and strong claims of preference, he was amongst the fortunate few who succeeded. And by a friend at the Transport Board who entered most cordially into his design of prosecuting Natural History, he procured an order to join the Northampton, a convict ship taken up by Government for Botany-bay. In this voyage he united the office of supercargo to that of surgeon, and received in consequence an increase of profit by the appointment, but his great object was to enrich himself and his country by the products of another hemisphere, pecuniary advantages were only a secondary consideration; his fortune was fully equal to the exigencies of his situation, and no motive, I am persuaded, could operate so powerfully with him as the real love of science.

On his passage from Port Jackson his hopes and expectations were in a great measure defeated, for unfortunately for himself and the public, the natural curiosities which he had collected at New South Wales were destroyed at Batavia by the vessel taking fire when she had nearly compleated her cargo for England. His detention at Java was prolonged for many weeks by this accident, and in the course of his stay on that island, he was introduced to the Governor, and lived chiefly at the hospitable mansion of Sir Thomas S. Raffles.

After his arrival in England in 1816, he was stationary for some months at his brother's in Suffolk, earnestly courting some opportunity to renew his travels without much probability of success; but his former acquaintance, the late Governor of Java, was sent in the year 1817 to the island of Sumatra, and upon the recommendation of Sir Joseph Banks, the Doctor accompanied him as Naturalist, under the patronage of the Hon. East India Company. From the date of his departure no letters were ever received by his family, and after he reached the place of destination, the first intelligence they had was a communication from Sir T. S. R. which announced the melancholy tidings of his death.

He died at Padang, on the island of Sumatra, on the 26th of July 1818, in the 35th year of his age. It appears he was attacked with a violent fever immediately upon his return from an excursion into the interior, in which he accompanied the Governor; and the excessive fatigue which he (and indeed the whole party) underwent on the occasion in this unhealthy climate, was, we fear, the cause of this deplorable event; he fell thus an early sacrifice to his exertions in pursuit of knowledge.

In reflecting upon the peaceful habits of his mind, it is somewhat difficult to reconcile his choice of a sea-life in preference to the delights and comforts of a settled home, but we must seek for an explanation in the ruling passion, which was to visit and explore distant regions, whatever sacrifices it might cost; and so insatiable was this desire, that although he had twice circumnavigated the globe, and witnessed the many wonders of Italy, etc. he yet accepted with eagerness the offer of going to Sumatra as a new field of discovery; under a strong presentiment, from the insalubrity of the climate, that when he departed from England, he should never return to relate the history of his adventures.

He published, beside his inaugural thesis, several papers on detached subjects in the Physical and Philosophical Journal, and left to the Linnaean Society a large collection of fossils and shells to be deposited in their museum. His last will contained directions for a mural monument to be erected in the parish church of Beccles, with emblematic designs of his own, expressive of his sentiments, and as an authentic memorial of the principal events of his life, to be written in Latin by Dawson Turner, esq. of Great Yarmouth.

In delineating the features of his character we should say with the poet, he was no vulgar boy. There was truly in his natural disposition an indifference or unwillingness to engage in puerile amusements, and his reluctance to join with young associates was accompanied, as perhaps will generally be observed to be the case, by meekness of temper and great shyness of behaviour. This sort of idiosycracy, to which might be added his taciturnity, gave an unfavourable coldness to his manner, which he never conquered by his intercourse with the world. And so far as it precluded his general acquaintance from much interesting conversation, it was to be lamented, as well as that he likewise became chargeable himself with the odious imputation of apathy.

Such as shared his confidence however, and had the best means of judging, will attest he was a warm-hearted man, and was neither deficient in feeling or benevolence; many instances might be cited of the most unostentatious kindness : may we not therefore explain, if not excuse, his silence by his caution not to obtrude common-place remarks, and by his great modesty in forbearing to impart intelligence which he supposed his hearers might already possess. In witholding his encomiums upon living characters another reason may be assigned with great probability ; his inflexible integrity and rectitude of mind, made him dread any, the least approach to flattery, than which nothing could be more abhorent to his nature: he scorned those arts that bore even the semblance of dishonesty, and he made little distinction in his code of morals, between the practised sycophant and the accomplished knave.

His abilities as an attentive observer, are best exemplified by his papers addressed to the Linnaean Society, and his industry and application are incontestably proved by the voluminous manuscripts he left behind him, the contents of which hereafter may be thought worthy of publication, more especially those concerning the duties and defects of the regulations in Naval Surgery. In his manner, he might be said to want the amenities of polished life; few scholars are quite at ease in the drawing-room, and the Graces had very little share in his contemplation; but let it be remembered, on the other hand, he was free from any moral stain, that he never disgraced himself by unmanly compliances, and deserved the noblest appellation to which we can aspire, the title of a good and honest man. Such in the estimation of the writer is a faithful portrait of Dr. Joseph Arnold, not without its blemishes and shades of imperfection (for who, alas, is exempt), but with failings of a kind so venial, that we may rely upon the justice of posterity to respect his memory as a valuable member of the community.........The Gentleman's Magazine.