William Carter was appointed Master of the Supreme Court on 25 August 1824 [4]. He was granted 2030 acres near Merton on 8 November 1824 [1]. This land, known as Piercefield, was later acquired by the Bettington brothers. 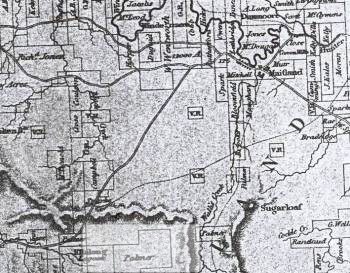 The land shown as Palmer on the map above was also a grant to William Carter.

Convicts assigned to William Carter at Barraba in 1828 included -

A house was constructed in the 1830's probably with convict labour, however William Carter came into financial difficulties. He was declared an insolvent debtor and his salary distributed to his creditors. His stock was sold and land forfeited and he was removed from his position as Master of the Supreme Court.

George Thomas Palmer senior (b. 1784) acquired the estate at this time:

Advertisement - Sydney Herald in 1834 - A most superior Estate known by the name of Barraba, formerly the property of William Carter, Esq., distant from the Green Hills by a bush road, only sixteen miles and by the main road twenty five miles from Maitland and nearly adjoining Elalang, the Estate of Robert Crawford Esq., This Farm comprises One Thousand Two Hundred and Eighty Acres of rich soil, admirably adapted to Agricultural and Dairy purposes. The improvements are most extensive - consisting of an excellent verandah House of six commodious rooms, four of them twenty one feet in length with under ground cellar, detached offices. A most substantial barn with mill house adjoining about one hundred feet in length with flagged cellar underneath, intended for the salting of provisions. A stable with loose box, sufficient to accommodate ten horses. A good dairy of two rooms. A tobacco house also of two rooms. Upwards of one hundred acres are cleared and burned off; a considerable proportion of which has been under cultivation, and the fencing comprises a large part of the Estate. The Timber on the land is well suited for building purposes, and very fine Cedar may be cut in the neighbourhood. [2]