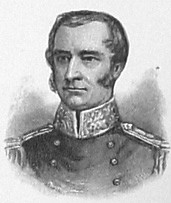 Excitement abounded in the town of Newcastle as the Governor's visit neared in October 1844......

The Maitland Mercury's correspondent gave an amusing report on the anticipated event:

'Preparations are made to receive his Excellency with every possible mark of respect due to his exalted position. It is said that an address is in readiness to be presented to Sir George on his arrival, but of the nature of the address we are ignorant.

His Excellency will, it is said, visit the Gaol, Stockade, military and convict hospitals, Nobby's Island, the court house, and the post office; and we believe the village of Stockton, and inspect the mills, manufactories, and salt works there.

It is supposed the Governor will sleep on Thursday night at Newcastle and proceed to Maitland by the steamer Thistle on Friday morning.

We have every reason to believe that the whole of the inhabitants, who are early risers, will be on the wharf at five o'clock tomorrow morning, the ladies in their 'best bibs and tuckers' and 'Sweetest of smiles,' to welcome his Excellency and suite to his hotel. We are further confidentially informed that a band of music will not be in attendance. His Excellency, although a military man of the old regime, is not fond of unnecessary parade. But the attentions and civilities of the inhabitants will be but proper, considering that his Excellency's visit to the districts of the Hunter are like angels' - few and far between.

A substantial breakfast, in Rouse's best style, at the Newcastle Inn, would be equally as palatable as an address after a ten hours' voyage by steam, and more to the purpose.

We hope that such of our friends as patronise Fisher and Co's colonial tweed will be decked in their best superfines and blue buttons, and shave betimes. We sent ourselves this afternoon to the only hairdresser's in the town for a pot of pomatum and the lend of a curling tongs, and were positively told that 'all was sold and that tongs was sent to Maitland by express'. This was a sad blow to us all.

A stylish friend of ours in this town has stated his intention of going to bed at eight this evening, to be awakened at midnight, when he will commence the business of his toilet, and be ready by half past four to morrow morning. [1]

Arrival of the Governor at Newcastle

Sir George Gipps accompanied by Lady Gipps, Captain Moriarty, port master of Sydney and E. Merewether Esq., his Excellency's aide-de-camp, arrived at Newcastle at 6.30am on Thursday 24th October on the Rose steamer. A guard of honor and a considerable number of the respectable residents of Newcastle were waiting at the wharf to receive him.

He breakfasted at Rouse's Hotel and afterwards visited the wharf, the stockades, the hospital and the gaol where he released Mr. Johnston, late editor of the Satirist newspaper.

He then went over to Nobby's Island and inspected the works and spoke with prisoners toiling there.

Accompanied by Mr. Moriarty and Mr. White, surveyor he proceeded up the river to the Flats where vessels regularly got stuck on the sand banks. On passing by Mr. Scott's salt works he was loudly cheered by Mr. Scott and the workers. On his return he visited the cloth factory, the salt works and the iron foundry at Stockton.

A Meeting of Residents

A meeting was convened at the Court house for the purpose of formulating an address to present to the Governor. There were about sixty people in attendance including the following men some of whom made speeches:

In their address to His Excellency the residents put forward two main proposals - Firstly that the main road from the interior be improved and the bridge over Iron Bark Creek be fixed and secondly that a paid superintendent of police be appointed.

Many of the larger estates from the Upper Hunter such as James Bowman's Ravensworth and Henry Dangar's Neotsfield and also the A.A. Company had for the last few years sent their produce via road as the steamers were costly and were well known for carelessness in taking care of the goods. However this presented problems because of the wretched state of the roads.

Simon Kemp requested men from the Stockade be used to perform road work and he would see it was done in such a manner that before long a coach would be started with four horses. When this took place, Mr. Kemp maitained there would be no occasion to proceed to Morpeth by the steamers and to be stuck on the Flats for 5 or 6 hours. The usefulness of the dredging machine was questionable but fixing the roads would benefit the entire community.

On the subject of a paid Police Superintendent
Rev. C. P. N. Wilton remarked that in a town like Newcastle no justice of the peace could be expected to take upon himself the responsibility of such an arduous office as superintendent of police without an adequate remuneration.

At the end of the meeting Simon Kemp rose to thank Major Last for his work in re-building the wharf at Newcastle.

The address being formed, a committee proceeded to Rouse's Hotel to present it to the Governor whose reply although mostly gracious must have been bitterly disappointing to the townsfolk.

They were informed that the colony was only just beginning to recover after the devastating depression and government funding was unavailable for their road and bridge works. There was only a sum of &pound6000 in Treasury. The Governor also made caustic remarks regarding the arrears of quit rents which amounted to &pound50,000.

On the subject of a paid Police Superintendent for the town he made no remark at all.

The following day the Governor and his Suite boarded the Thistle steamer which conveyed them to Morpeth where his tour continued to Maitland.