Use the Search Box above to find your Hunter Valley Ancestor.
The Yacht Club Hotel was built on the site of Joseph Spragg's general store in Hunter Street. Across the road was the Newcastle Post Office.

Joseph Spragg was one of the early business men of the place and for years kept a store on the site later occupied by the Yacht Club Hotel.

Joseph Spragg's store was a general one in every sense of the word, where, so to speak, the customer, could purchase anything from a needle to an anchor. One of Spragg's characteristics was his independent spirit. It was a common thing for him to tell customers who went to make purchases at meal hours that he was having his breakfast or dinner as the case may be and they must come back later on, when he would attend to them. There were only two stores in those days and if the rival establishment did not possess the required article the customer was entirely at the mercy of the eccentric merchant. His establishment embraced tailoring and hairdressing, and many a gathering took place in the old saloon, where the townsmen of the day discussed current politics and local topics of interest[1]

James Harrison Hubbard held the licence from 1867 - 1881. [2] In the sixties, the ordinary bill of fare at the Yacht Club Hotel (on between 1 p.m. and 2 pm) was a grilled chop or steak, a hot potato and a pint of beer, all for 1s. It was here that the regatta committee met in the days when James Hannell was the president. [3] 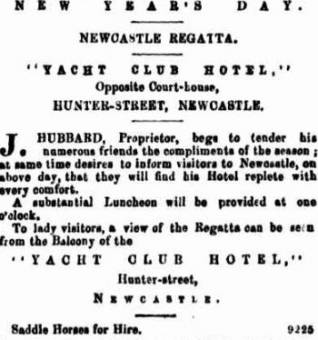 A fire took hold in the back of the Inn in 1876 however by the efforts of nearby residents and the fire warden the flames were brought under control.[5]

Proprietor James Harrison Hubbard was a large land speculator with Mr. Chinchen. They bought and subdivided, among other areas, Islington - where their names were perpetuated in the street naming scheme of the local government authority and the original Mayfield. Mr. Hubbard died in the late 80s. There was a large attendance at his funeral. [6]

The Yacht Club Hotel was pulled down and the Westminster Hotel erected in its place in the 1890's.[6]